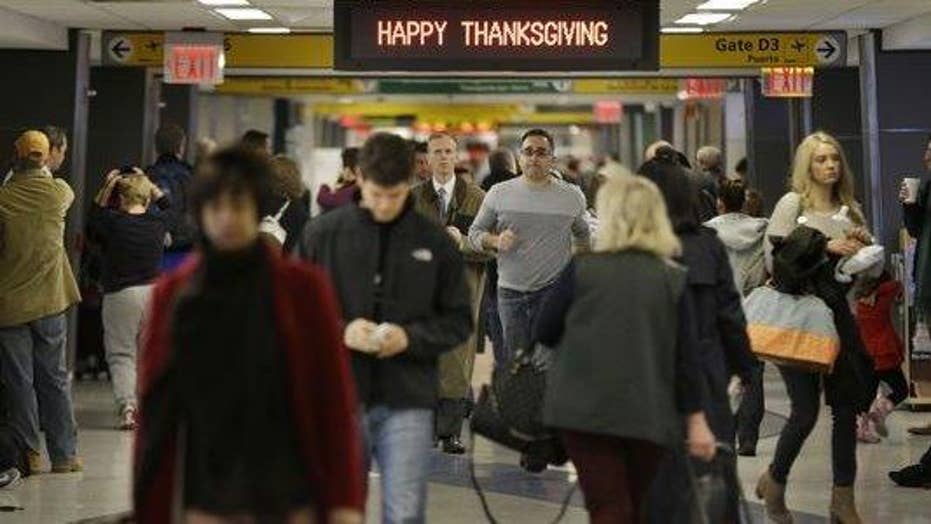 CHICAGO – Elizabeth Thompson can't wait to leave the big city behind and decompress over the Thanksgiving holiday at her grandmother's house in rural south-central Indiana. But first she has to get there.

On Wednesday, Thompson, 23, missed her Amtrak train from Chicago to Galesburg, Illinois, where she'd planned to catch a ride with a family member the rest of the way to Edinburgh, Indiana.

"It's just where we go to unplug and escape," said Thompson, who had to decide whether to wait several hours for the next train or hop on a bus and get going.

Americans took to the roads, air and railways Wednesday for what is expected to be the busiest Thanksgiving travel period in almost a decade. Almost 49 million people are expected to travel 50 miles or more between Wednesday and Sunday, the most since 2007, because of lower gas prices and an improving economy, according to AAA.

And while they look forward to eating turkey and watching football, many are ready to abandon another, more recent, American pastime: rehashing the rancorous election between Republican Donald Trump and Democrat Hillary Clinton.

"My mother specifically said, 'We're not going to talk about it,'" for her grandmother's sake, Thompson said. Although nobody in her family supported Trump, "my grandmother is sick of hearing about it."

Kevin Baumann, a 47-year-old boilermaker from Spokane, Washington, is able to join his family for Thanksgiving for the first time in two years, so politics was the last thing he wanted to discuss.

"We'll avoid it," said Baumann, who stopped in central Montana Tuesday on his way home, after working on a coal plant in Iowa. "We've got bigger things to talk about during the holidays."

James Arnold, 18, a freshman at Eastern University in Philadelphia, expects that the election will be a big topic of conversation during Thanksgiving dinner at his family's home in Silver Spring, Maryland.

"My family loves to talk about things together and the election is something huge," he said Tuesday while waiting for a train.

"Every holiday they sit down and talk about things like that," he added. "It's going to be interesting."

The weather appeared to be cooperating for the most part, with no significant issues, National Weather Service meteorologist Amy Seeley said. There was light rain in Chicago, a major airline hub, but delays were only averaging 15 minutes, according to the Chicago Department of Aviation.

"It looks pretty quiet across the country today; I'll take it," Seeley said.

For those who didn't want to drive, Amtrak was adding some extra trains Wednesday and Sunday between Chicago and Milwaukee, its biggest Midwest corridor, spokesman Marc Magliari said. Some Midwest trains have been sold out for several days, he said.

"This is a day when we need everything to go right in order to not have a serious issue with delays, with folks being backed up into stations," Moorman told reporters at New York's Pennsylvania Station. "Knock on wood when I say this, everything's going well."