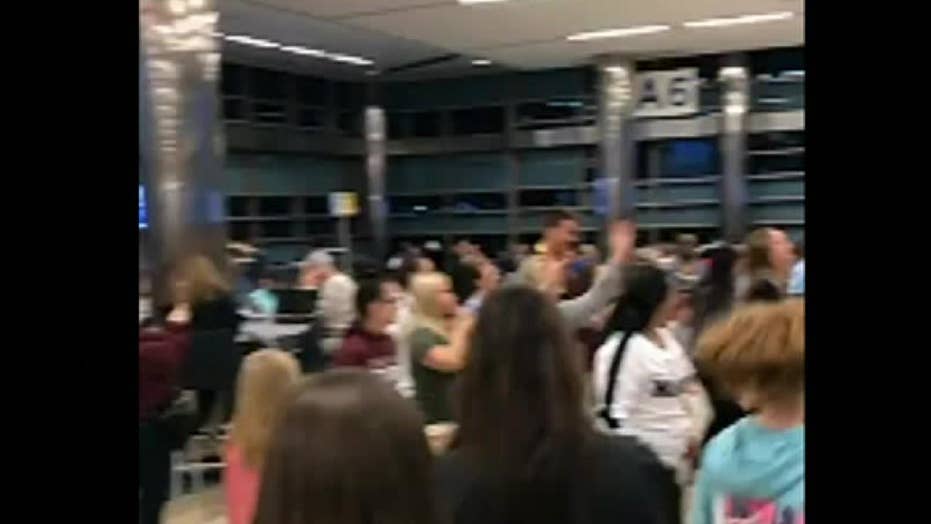 A Spirit Airlines staffer went viral for dancing with a group f cheerleaders during a flight delay.

One jovial Spirit Airlines employee in South Carolina surprised a group of New Jersey cheerleaders with all the right moves, joining the athletes who danced to pass the time during a flight delay at Myrtle Beach International Airport. Video footage of the lighthearted scene has since gone viral on social media.

On April 2, cheerleaders from the South Jersey Storm learned that their flight back to the Garden State after a competition would be delayed by 40 minutes, 6 ABC Action News reports, prompting the team to keep themselves occupied with a little dance fun in the air hub.

“They just started playing music really loudly, and people were dancing along,” Spirit guest services agent Robert Dillon told Yahoo Lifestyle.  “It was getting to the point where I couldn’t make the delay announcement.”

With the sporty squad shimmying and shaking to “The Cupid Shuffle” and “Wobble Baby,” Dillion decided to join in.

“When I jumped in on it, I don’t think anyone was expecting it — that’s when they began to cheer and really get into it,” the 26-year-old mused, detailing that the girls were excited to welcome him into their dance line. As for Dillon, dancing felt like second nature – given his other job as an activities coordinator at a kid-friendly Myrtle Beach resort.

A 30-second clip of the fun has since gone viral on Twitter with nearly 5,500 views. One cheer mom said that the Spirit staffer’s actions truly brightened their trip home.

“I loved how much fun [Dillon] was having and it was just nice to see something positive. The girls loved that he jumped in,” Kristie Brown, who was traveling with her 6-year-old daughter, told Yahoo. “It was such a nice thing and it truly made our delay go by quickly.”

“Alright, I’m done,” Dillon said with a laugh at the close of the clip as he returned back to work, as the cheerleaders whopped and hollered.

Though the deed was small, Brown said that the Spirit employee’s kindness meant a lot to the parents and coaches.

“There is so much negativity in the world, especially at airports, and I just wanted people to see a fun experience and enjoy it as much as the girls and Robert did,” she said.

Dillon, too, agreed that it’s the little things that often matter most – especially in the hectic travel industry.

“Delays can be a downer when you’re trying to see family or go on vacation. But we’re all trying to achieve the common goal of getting you guys out and we want to see everyone leave with a smile on their face,” the airline staffer told the outlet.

“It’s great when everyone is in a good mood and having fun,” he continued. “I really appreciated how everyone was having a good time that night because it makes the experience for everyone else so much better.”

Though reps for the carrier did not immediately return Fox News’ request for comment, they offered NJ.com the following statement:

“At Spirit Airlines we strive for an excellent guest experience, while providing the best value in the sky. In this case, our agent Robert Dillon, went above and beyond to help pass the time of a weather delay and have a little fun with our guests,” a spokesperson said. “We salute Robert for his positive attitude and his awesome dance moves.”

"Our flights are mostly on time, but when they aren't... we make the best of it! Huge shout out to Robert Dillon who kept our Guests entertained while they patiently waited to board their flight!" Spirit Airlines later tweeted.