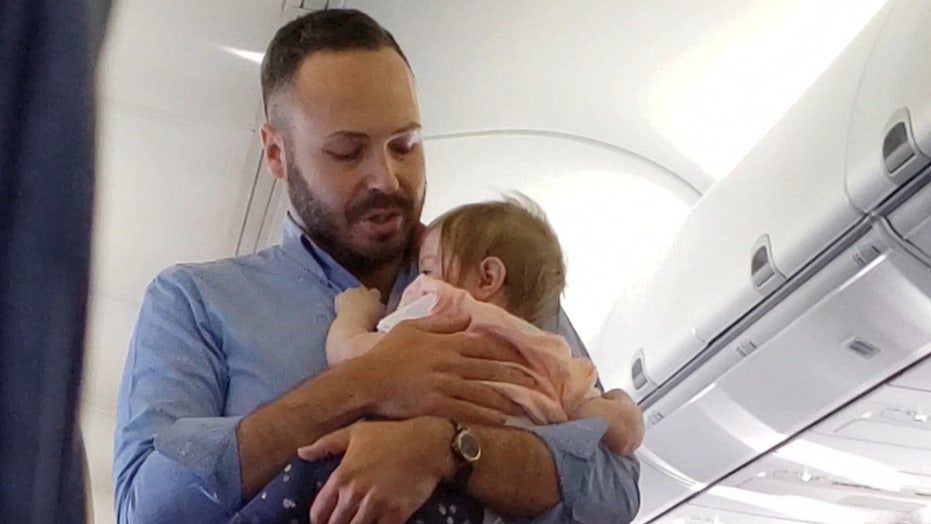 An Illinois mom says that the kind actions of one Southwest Airlines’ flight attendant has reminded her that “there are good people out there,” after the steward comforted her screaming baby on the tot’s first flight.

Video footage of the sweet scene has since gone viral online with nearly 22,000 views to date.

Last week, Ashley Dowell wrote on Facebook that she’ll be “forever grateful” to Southwest staffer Wesley Hunt for his help in calming down her nine-month-old daughter Alayna en route to a recent family vacation in Disney World.

The Rockford woman told Good Morning America though she and her husband did all they could to comfort their youngest child, who became irate shortly after takeoff, they couldn’t help but feel self-conscious that their little one was causing a commotion.

"We’re feeling like we’re those people on the plane with the baby that's crying and everyone wants to kick you off the plane,” Dowell said.

Fortunately, relief was on the way. About 15 minutes into the flight, Hunt approached the family and offered to hold the baby.

"We were in such a small, confined, area, we were really desperate," Dowell recalled. "He was so good with her, and so nurturing and caring and pretty instantaneously, she calmed down."

In the 20-second clip the thankful mom later shared to Facebook, the flight attendant can be seen rocking and patting little Alayna as he walked down the aisle, who at last relaxed and fell asleep, Dowell said.

"There’s just so much negativity in this world," the mother of three told GMA, musing that Hunt’s random act of kindness was a reminder that "there are good people out there."

"In a world full of hate, I like to be a shining light to someone who needs it," Wesley Hunt, pictured, said of his kind deed. (Ashley Dowell)

As for the kindhearted airline employee, Hunt said that consoling baby Alayna was simply the right thing to do.

"First of all, I love babies, and I want like a hundred of them," the 32-year-old joked to the outlet.

Seeing that the Dowell and her husband were “struggling a little” as they boarded the plane with their baby girl and young sons, ages seven and four, he jumped at the chance to make their lives easier when the tot started screaming.

"In a world full of hate, I like to be a shining light to someone who needs it," the flight attendant said. "I could tell in that particular moment her and her husband kind of needed a little light."

Reps for Southwest did not immediately return Fox News’ request for comment on the story.