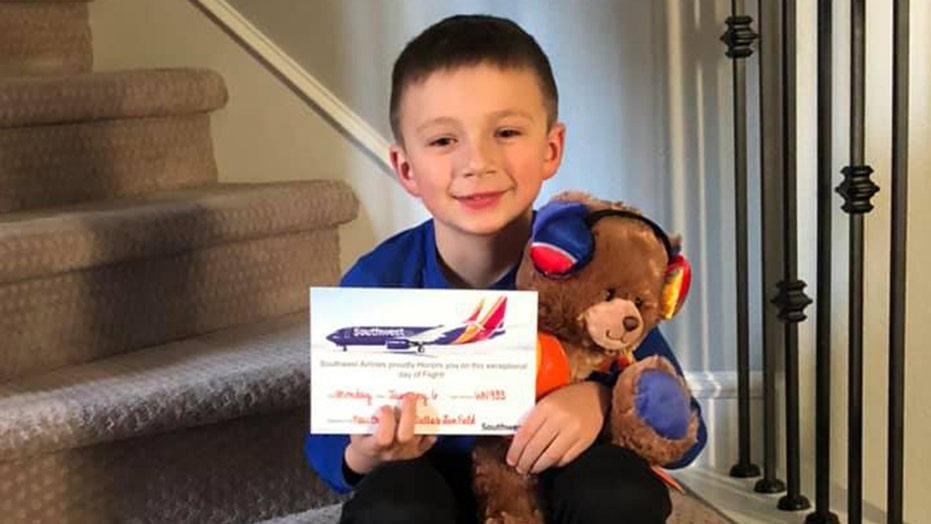 A young boy who lost his favorite stuffed animal has now made a new friend, thanks to Southwest Airlines.

Grayson Mulligan, from Texas, was on a trip to New Orleans with his father over the Thanksgiving holiday when he lost his “very special teddy bear” on the plane,” his mom Chrissy explained on Facebook.

Chrissy then reached out to Southwest, posting the story on their Facebook page, and asking for any help in returning her son’s stuffed animal. She later got a call from Southwest’s corporate office, assuring her they were on the case.

“It caught so much attention that it went to the executive level,” said Chrissy on Facebook. “They put Adam who works for Southwest exclusively on finding G-man’s Teddy.”

Chrissy said Southwest soon reached out to the flight attendants on the plane, one of whom remembered handing the bear over to a staffer at the New Orleans airport. Unfortunately, Southwest ultimately learned that the bear never made it to the airport’s lost-and-found.

That’s when Southwest decided to do the next best thing: Send Grayson a new bear.

And not only that but Southwest even created a whole backstory for Grayson’s new friend, explaining how he worked at Dallas Love Field before booking himself a flight to Grayson’s house.

“I can’t say enough about this airline and how much effort they put into this,” Chrissy later wrote on Facebook, along with photos of Grayson and his new friend, whom he named “Jack.”

“Keep doing what you do Southwest Airlines, you have some amazing individuals working for you with huge hearts!” she added.

In a statement shared with Fox News, Southwest confirmed it was happy to help.

“Our Team searched high and low, but couldn’t locate Grayson’s teddy. That’s when our Social Care Team had an idea to help Grayson gain a new friend,” the airline explained.

“We love connecting people to what’s important in their lives, and our Employees put their Servant’s Heart on display to help make Grayson’s day. We are proud to have played a small role in bringing Grayson and Jack together.”