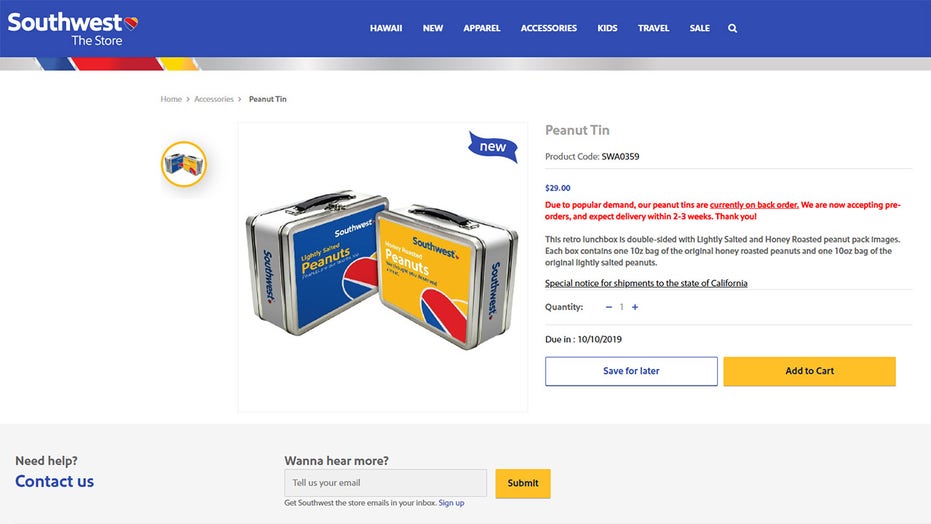 Seriously, what is the deal with airline peanuts?

Southwest Airlines, which discontinued its practice of giving out complimentary peanuts in August 2018, has recently decided to bring back its “legendary” snacks for shoppers at its online store — and despite the seemingly steep price, the nuts have already sold out.

DELTA WALKS BACK RULE FOR EMOTIONAL SUPPORT ANIMALS, BUT NOT THIS ONE BREED OF DOG

The carrier announced last week that the nuts, which come in both lightly salted and honey-roasted varieties, would be available as part of its new double-sided “peanut lunchboxes,” each containing two 10-ounce bags of Southwest’s peanuts (one of each variety).

“Missing the Southwest peanuts?” the airline wrote on social media. “We’ve got ‘em right here. Introducing the newest item available at Southwest the Store: the peanut lunchbox, complete with two bags of our legendary Southwest peanuts.”

Each lunchbox also retails for $29 at the airline’s online store, but that didn’t stop fans from gobbling up the inventory right away. A message posted to the Southwest Airlines online store reads, “Due to popular demand, our peanut tins are currently on back order. We are now accepting pre-orders, and expect delivery within 2-3 weeks.”

A representative for Southwest confirmed to Fox News that the peanuts are back-ordered for three to four weeks, with new stock expected in mid-October.

The nuts come in a two-sided "peanut lunchbox" that currently sells for $29. (Southwest The Store)

Southwest originally announced plans to stop offering peanuts back in July 2018, detailing in a statement that it was in the best interest of passengers with allergies.

“To ensure the best on-board experience for everyone, especially for customers with peanut-related allergies, we’ve made the difficult decision to discontinue serving peanuts on all flights,” an airline official wrote.

“We hope that our free pretzels (and the wonderful portfolio of free snacks on longer flights), served along with our legendary Southwest Hospitality, will please customers who might be nostalgic or sad to see peanuts go,” the spokesperson said.

Southwest, in bringing back its peanuts for online sale, likely tapped into some nostalgia for folks who remember when the airline was nicknamed “the peanut airline” due to the carrier’s choice to serve only peanuts on its flights, to maximize cost efficiency.

Jerry Seinfeld, meanwhile, likely remains flabbergasted at all this demand for airline peanuts.