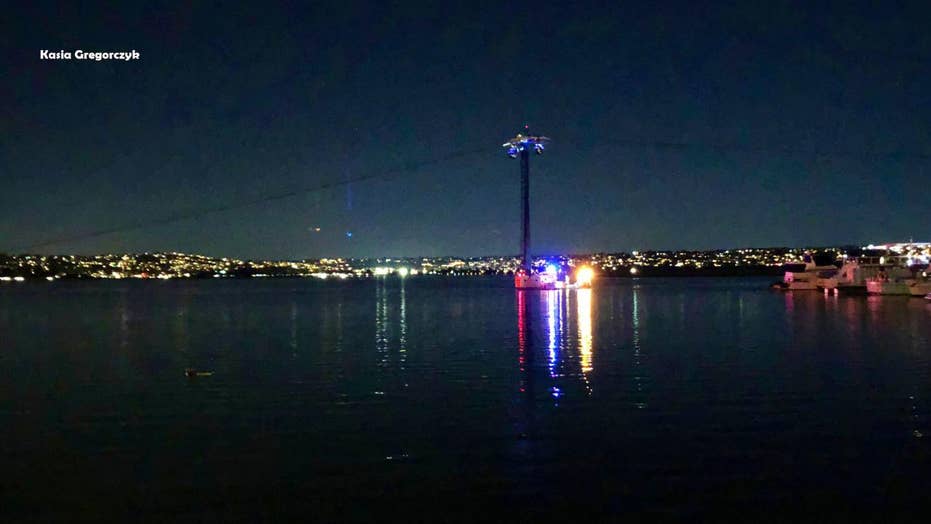 Adults, children and a baby were plucked one by one by first responders after being left hanging over water in San Diego.

More than a dozen guests wound up trapped on a gondola ride at SeaWorld in San Diego on a Monday after an "unusual gust of significant wind" caused the ride to shut down.

Jonathan Sherr, who was on the ride, told NBC7 the wind "just started rocking the cart."

In this photo provided by Kasia Gregorczyk, more than a dozen people are trapped on a ride at SeaWorld Monday, Feb. 18, 2019, in San Diego. (Kasia Gregorczyk via AP)

A total of 16 riders were stuck in five gondolas, some of which were suspended above Mission Bay. Of the guests on the ride, seven were children, including one baby, FOX5 reported.

In this photo provided by Kasia Gregorczyk, more than a dozen people are trapped on a ride at SeaWorld Monday, Feb. 18, 2019, in San Diego. (Kasia Gregorczyk via AP)

The San Diego Fire Department said in a series of posts on Twitter that some people had to be lowered by harnesses and rescued by San Diego Lifeguards boats.

The rescue was completed by 11 p.m. and no injuries were reported, fire officials said.

"All 16 persons trapped in the gondola ride are safe on the ground," the fire department said. "Great job by our Technical Rescue Team firefighters, @SDLifeguards & support staff."

The National Weather Service says it was about 49 degrees in San Diego at the time.

SeaWorld told Fox News in a statement the gondolas had blankets on board, and evacuations were conducted in accordance with "highest safety standards."

"Guest safety is our top priority," SeaWorld said in a statement. "Once our guests are cared for, we will conduct a thorough inspection of the ride prior to re-opening. We apologize for the inconvenience this has caused the guests."