Researchers at Brigham Young University say they can successfully dampen the vacuum-assisted toilets, making them only about half as loud. (iStock)

Researchers at Brigham Young University are claiming to have invented a semi-quiet airplane toilet that won’t alert absolutely everyone in the nearby airspace of your bathroom activity.

The new design, which reportedly dampens the sounds of the vacuum-assisted toilets by up to 16 decibels, would be only about half as loud as standard airline toilets, according to its inventors.

"Airline companies have always had standards for the toilet noise, but they've never met those and there has never been much pressure to do so," said researcher and BYU physics professor Scott Sommerfeldt in a press release.

"Now with the reduced cabin sound levels, the sound of the toilet flushing is more noticeable and customers are pushing back."

Lead researcher and BYU physics professor Kent Gee added that he’s actually heard complaints about loud airplane toilets from the parents of small children, who fear that their kids may be avoiding the restroom for that exact reason. 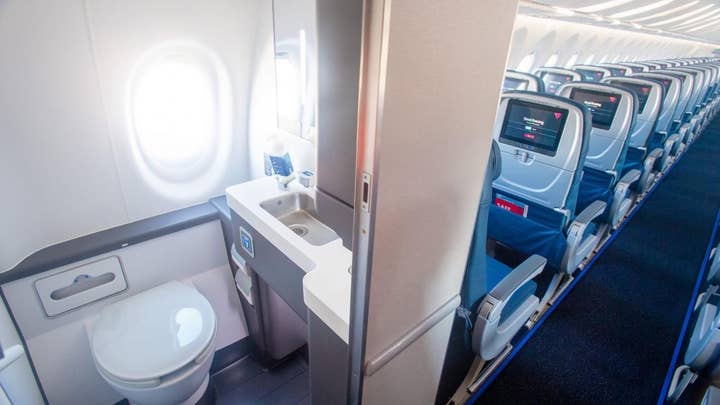 BYU’s new design reportedly improves on current vacuum-assisted airplane toilets by lengthening the piping between the bowl and the flush valve, and changing the angling of the piping to a more “gradual bend,” thereby reducing some interference of the rapidly flowing air and water.

Researchers claim the design can be easily retrofitted into existing aircraft (rather than only available for new aircraft constructions) and may be helpful in trains and cruise liners, too.

"The toilet is much quieter and now kids won't think they're going to get sucked out,” said BYU grad student Michael T. Rose, lead author of the researchers’ published findings.

The group has reportedly filed three patents on the design and is currently working to bring it to the attention of the airline industry.