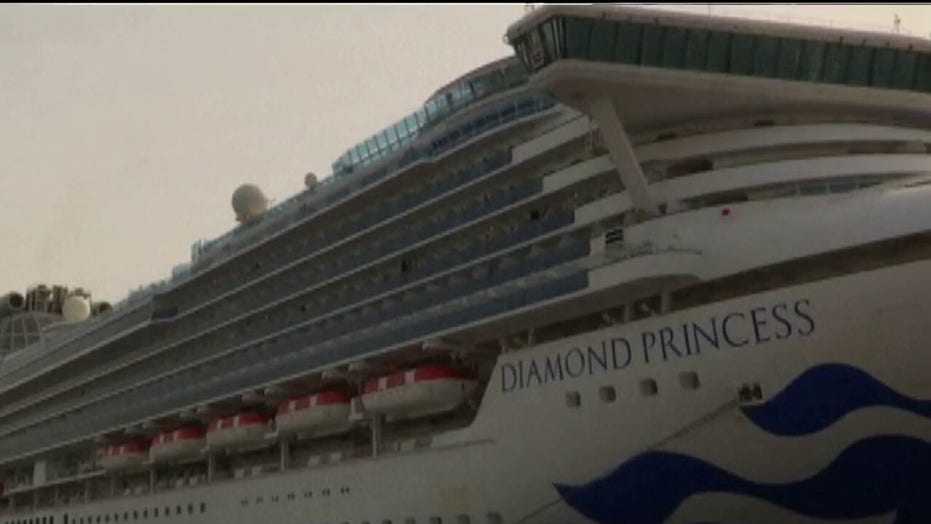 Passengers Milena Basso and her husband Gaetano Cerullo are calling for help from President Trump after being trapped on a Diamond Princess cruise ship off the coast of Japan with at least 61 positive cases of coronavirus; Fox News correspondent Bryan Llenas reports.

They’re definitely going to need a vacation after this vacation.

Princess Cruises has promised to compensate crew members currently quarantined on the Diamond Princess ship with two months of paid vacation, as the number of cases of COVID-19 continues to rise among passengers.

On Wednesday, Japanese health officials and Princess Cruises confirmed 44 more positive cases of the COVID-19, formerly known as the novel coronavirus, among the 3,700 on board. As of Thursday morning, there were 218 people infected among the Diamond Princess’ 2,666 guests and 1,045 crew members, the Associated Press reports. At least 10 of the people infected are crew members, according to CNBC.

Passengers stand on the deck of the Diamond Princess cruise ship anchored at Yokohama Port. (Yuta Omori/Kyodo News via AP)

The American-based ship was completing a 14-day cruise that stopped in Hong Kong and several other Asian ports when it docked in Yokohama on Feb. 3, after it was determined some passengers had been sickened with the virus.

The Diamond Princess ship reportedly has the largest cluster of COVID-19 infections anywhere in the world outside of China.

As compensation for its crew, Princess Cruises will provide two months of paid vacation to employees currently working on the quarantined cruise ship. Guests will also receive a full refund for their current excursion, plus a second cruise for free, CNBC reports.

“I agree that the crew is critical for our success, so we just let them know that they will be given two paid vacation months off following this ordeal,” said Roger Frizzell, a spokesperson for Carnival Corporation, Princess Cruises’ parent company.

A spokesperson for Princess Cruises was not immediately available to offer further comment on the news.

“Princess Cruises has been informed that over the next several days, Japanese health officials are planning a voluntary disembarkation of guests to complete their quarantine period at a shoreside facility,” the cruise line wrote in an update on its website. “From the information available it is our understanding that this will be a phased approach, with the most medically vulnerable guests in the first phase, including older adults with pre-existing health conditions.”

Once screened, guests who test positive will be transported to local hospitals. Those who test negative will be given the option of relocating to a shoreside facility, with individual rooms and bathrooms, for the final stages of quarantine. Guests are “also welcome to stay onboard” the Diamond Princess, if they so choose.

On Thursday, the number of coronavirus cases in China significantly increased when 14,840 new cases of the disease were reported.

The country now has more than 50,000 confirmed cases and 1,300 people have died from the viral disease worldwide.