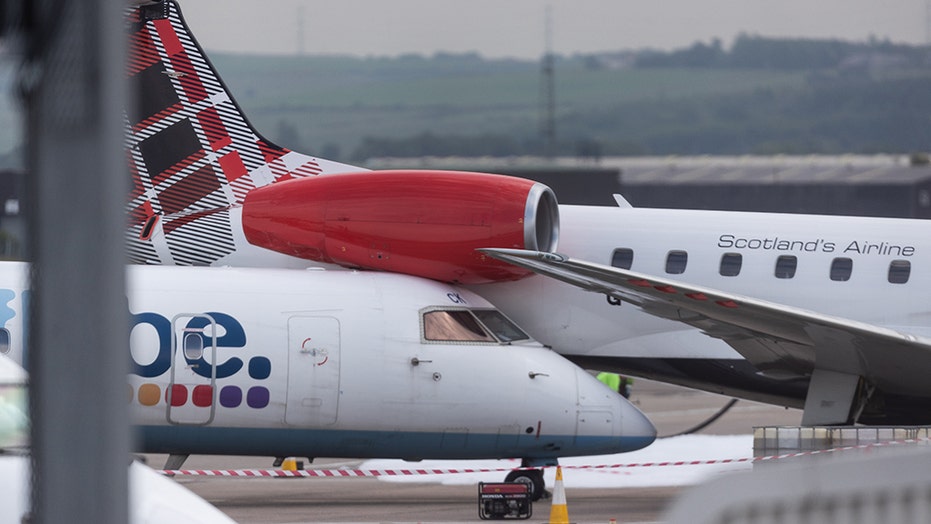 That’s going to leave a mark.

One airplane ended up wedged underneath another plane after a bizarre accident. Officials are still investigating the cause of the incident.

Authorities are investigating an incident at Aberdeen Airport in Scotland when a former Flybe jet collided with a Loganair plane. (DEREK IRONSIDE / NEWSLINE MEDIA)

A plane that was formerly part of the Flybe airline fleet struck a stationary Loganair plane at Aberdeen Airport in Scotland, the BBC reports. There were no passengers on the Loganair plane at the time of the incident on Tuesday evening.

AIRLINE ARE TEMPORARILY SUSPENDING ALCOHOL SERVICE ON FLIGHTS AMID PANDEMIC

The former Flybe plane was reportedly being stored at Aberdeen Airport. While it was being prepared for departure, it collided with the Loganair vehicle. Images from the scene show the former Flybe plane had wedged itself under the other plane enough to lift part of it off the ground.

No injuries were reported after the accident.

In a statement obtained by the BBC, a spokesperson for Loganair confirmed that no one was injured during the incident. (DEREK IRONSIDE / NEWSLINE MEDIA)

In a statement obtained by the BBC, a spokesperson for Loganair said, “A Loganair Embraer 145 regional jet, parked with no passengers or crew members aboard, was hit by a former Flybe Bombardier Q400 aircraft, which we understand was being prepared for departure after being stored at Aberdeen Airport. The nose of the Q400 impacted the rear starboard side of the Embraer, becoming lodged underneath and lifting the right main gear off the ground.”

The statement concludes, "The most important thing is that no-one was injured in the incident, with the crew working on the ex-Flybe aircraft being safe and well, yet understandably shaken.”

The Air Accidents Investigation Branch (AAIB) confirmed to the BBC that it is carrying out an investigation into the incident.