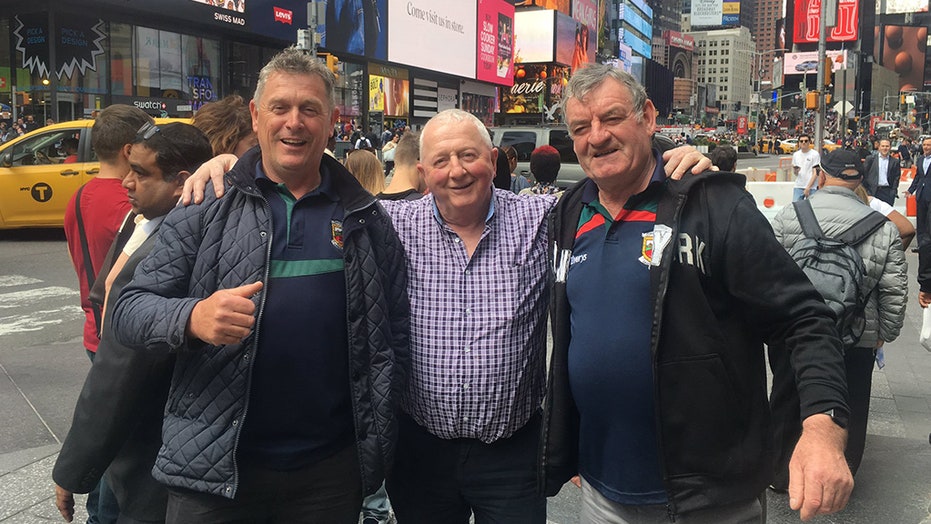 A woman is praising the “power of social media” that led to identifying in just one hour the three jolly Irish tourists whose photo she had recently snapped in New York's Times Square.

On May 12, Christina Boniello, of New Jersey, took to Twitter to share the humorous tale, The Irish Sun reports.

“When I was in the city last week, these three Irishmen asked me to take a photo of them, but none of them had phones. ‘You’ll take the picture and we’ll find it someday’ [they said] so if by some strange turn of events anyone knows these guys, here’s their photo,” the 23-year-old wrote online.

Incredibly, fellow Twittizens were able to identify the men within an hour, The Sun reports. They have since been named as Sean Tighe, Bernie Waldron and John Devanney from Ballyhaunis in County Mayo.

"I was just in New York City for unrelated things and I was taking a picture of a billboard,” the photographer told the outlet. “And all of a sudden these three guys just lined up in front of me and started posing trying to get my attention and in New York City you tend to look down and ignore if you don’t know people."

“But they got my attention and as soon as New Yorkers' hear an accent they tend to be a little bit nicer,” she continued.

Tighe, Waldron and Devanney reportedly asked the woman to take their photo with her cellphone, as the trio of travelers didn’t have a phone or camera of their own on them at the time.

Surprised, Boniello obliged — and was even more confused when they declared that the image would “find its way to us at some point” and that she didn’t need to send it their way.

Taking matters into her own hands and asking the social media community if by “some strange turn of events anyone knows these guys,” Boniello was shocked when the picture went viral, and that all three tourists were identified soon after she posted it.

“I can’t believe the attention the tweet has gotten! Just glad it’s made the way back to them,” she told the Irish Independent. “I most definitely wasn’t expecting all this! Just amazes me how quickly it spreads halfway around the world to find these guys.”

“I’m blown away and honestly so happy with the power of social media,” she later tweeted.

Commenters, too, were largely delighted with the story’s happy ending.

“I’ve just sent it to one of them. Hilarious,” one user wrote.

“This is the most Irish thing ever,” another joked.

“Love that they asked for you to take the photo and not a phone between them. We need more people like this,” one agreed.

“Six degrees of separation but in Ireland it’s about two degrees max,” another commenter cracked. “I love their confident declaration that they would find the photo, and weren’t they right! Well done for taking it!”

In similar headlines, in April, the “magic” of social media connected an American tourist with the family she spontaneously photographed about one hour before the Notre Dame Cathedral went up in flames on Monday in Paris.