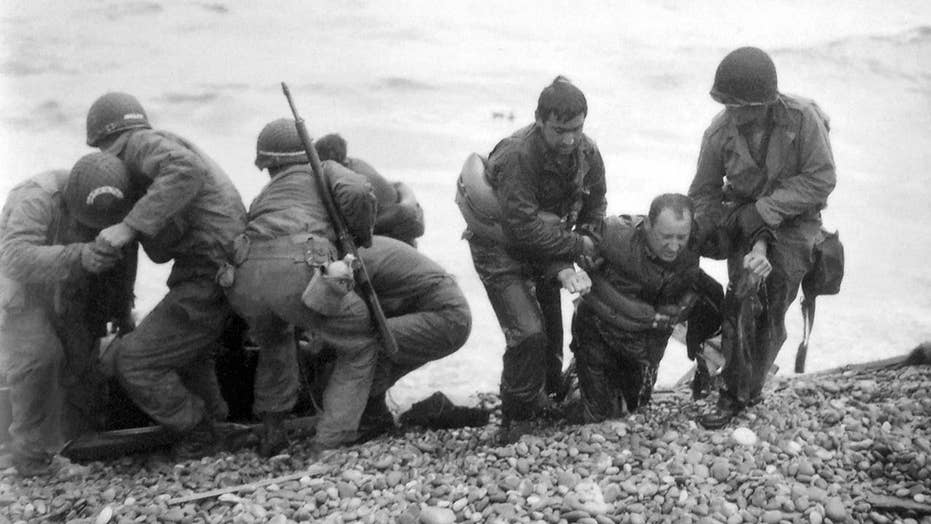 Proposed plans for a $111 million tourist attraction commemorating the Normandy landings at the end of World War II in northern France have sparked outrage, and an objecting petition has received over 18,000 signatures to date.

Ahead of the 80th anniversary of D-Day in 2024, Hervé Morin, president of the Normandy region, said he hopes to create a permanent attraction marking the historic invasion, The Local reported on Tuesday. At present, the area lacks a museum commemorating “all aspects” of the incredible Allied forces operation that led to the ultimate Liberation of France and the defeat of Nazi Germany.

In this file photo from June 6, 1944, members of an American landing unit help their comrades ashore during the Normandy invasion. The men reached the zone code-named Utah Beach, near Sainte- Mere-Eglise, on a life raft after their landing craft was hit and sunk by German coastal defenses. (Louis Weintraub/Pool Photo via AP, File)

Nicknamed “D-Day Land” by its critics, the “very early”-stage pitch – that would reportedly cost about $111 million – has been denounced as an “insult” to those who fought and died in the Second World War, according to The Sun.

The exact location of Morin’s desired attraction remains unclear at this time.

In this June 6, 1944, file photo, provided by the U.S. Army Signal Corps, General Dwight Eisenhower gives the order of the day, "Full Victory - Nothing Else" to paratroopers in England just before they board their planes to participate in the first assault in the invasion of the continent of Europe. June 6, 2019, marks the 75th anniversary of D-Day, the assault that began the liberation of France and Europe from German occupation, leading to the end World War II. (U.S. Army Signal Corps Photo via AP)

If the potential attraction actually gets built, Olivier Paz, mayor of Merville-Franceville, told local media that the site must not be allowed to become a “Disneyland” of sorts.

Morin, meanwhile, allegedly has a grand vision for the endeavor, reportedly imagining the inclusion of “film projections and light shows.”

An online petition protesting “D-Day Land,” organized by France’s National Research Group and addressed to President Emmanuel Macron, has since received over 18,500 signatures as of Wednesday morning. 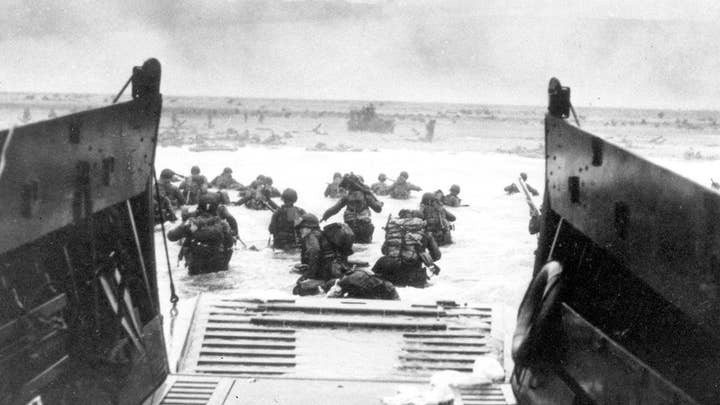 “[D-Day Land] will completely harm the ecology of the sector but also the respect for the victims and veterans killed during the Normandy landings but also for the battle that will follow,” the appeal argues.

“The Normandy landings are a page in the history of France which must be respected and not give way to an aspect of local business which will ultimately serve only to destroy the work done for years by memory associations but also for lovers of this page of history,” it concludes.

U.S. President Donald Trump talks to a U.S War veteran during a ceremony to mark the 75th anniversary of D-Day at the Normandy American Cemetery in Colleville-sur-Mer, Normandy, France, in June 2019. (AP)

About five million tourists visit the Normandy region each year to pay their respects, visiting the famous Normandy beaches as well as the cemeteries, monuments and museums in the area, the Sun reports.

D-Day saw more than 150,000 Allied troops land on the beaches of Normandy in northwest France on June 6, 1944, carried by 7,000 boats. The Battle of Normandy, codenamed Operation Overlord, was a turning point in the war, and helped bring about Nazi Germany's defeat in May 1945.