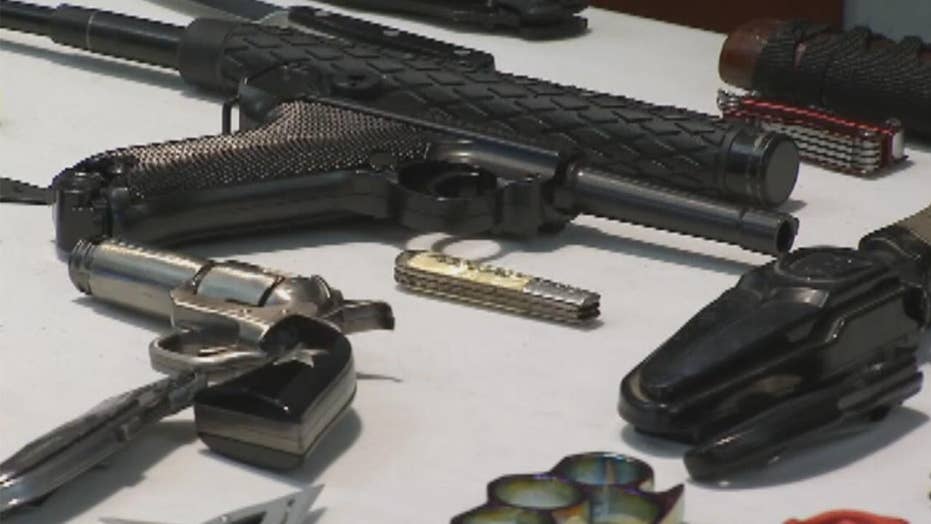 TSA demonstrates how to safely fly with a firearm

Owners must place their completely unloaded gun in a hard-sided case with padding inside, declare their weapon and check the bag.

A guitar shaped like a semiautomatic rifle. A pocket-sized pitchfork. A Freddy Krueger-style glove with razors for fingers.

The Transportation Security Administration unveiled a trove of the weirdest items yanked from travelers’ luggage Monday — in honor of one of their own who helped alert the public to the wild discoveries made at our nation’s airports.

The spread of confiscated oddities displayed at Dulles International Airport outside Washington, DC, included a glittery clutch-style purse with a brass knuckles clasp, a rusted circular saw blade and a faux grenade with perfume inside.

The agency showcased the stuff in honor of Curtis “Bob” Burns, the TSA’s former social-media director, who recently died at age 48.

Burns earned a following for posting images of bizarre items along with captions packed with his specific style of dad humor.

With Burns at the helm, the agency’s Instagram account won three Webby awards — for excellence on the Internet — last year, including the People’s Voice Award for weird social-media content marketing.

The caption read: “One might say this traveler went off half-cocked when packing this knife in his carry-on bag.”

When someone tried to bring the razor-fingered glove into Hartsfield-Jackson Atlanta International Airport last year, Burns posted an image of it on Instagram — along with a Freddy Krueger joke.

“It’s safe to sleep on Elm Street again,” he quipped in the post.

On the TSA blog, he shared a weekly count of firearms and summary of knives and other wacky items that travelers had stuffed into their bags, pockets, purses or briefcases.

Burns had served in the Gulf War and worked in airports before taking the job. In his Webby acceptance speech, Burns shook the award and said, “This Webby is carry-on approved!”

The TSA’s social-media presence now serves as a model for other federal agencies.

“How are we going to replace Bob? The reality is we can’t,” said the agency’s new social media director, David Johnston.

“When you look at his posts, you’re seeing a window into his soul. It really was from his heart, he was a fun, happy guy.”

He added, “We had a unique situation with him, but we can still be entertaining and help people as we find our way forward without him.”

The TSA plans to grow its social-media staff by bringing in three more employees to work the job.