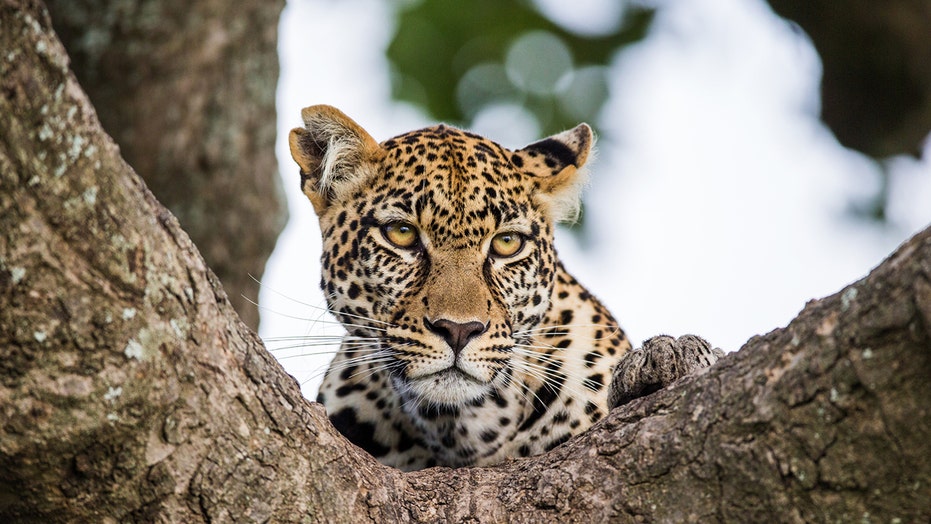 Talk about an intimidating breakfast guest.

A leopard recently wandered into the restaurant of a luxury hotel in South Africa while hunting its breakfast.

Erika Wiese, 39, took a video of the visitor as it walked around the restaurant of the Singita Ebony Lodge in the Sabi Sands reserve.

Wiese told Kruger Sightings that she was with her uncle and two friends just after breakfast when nearby vervet monkeys started making alarm calls, indicating a predator was nearby.

“Singita's staff is well-trained to deal with encounters of this kind and have strict safety protocols in place to ensure the safety of both staff and guests in these situations,” Wiese said. “We were, therefore, able to remain calm, silent and in awe of the beautiful creature that was so close to us.”

According to Wiese, the leopard had been seen in front of the lodge earlier that morning, hunting a bushbuck -- a type of African antelope.

The video, which was posted on Sunday, shows the leopard walking around various parts of the restaurant. At one point, the big cat appears to walk right past the person holding the camera.

About halfway through the video, the leopard can be seen climbing stairs to an upper deck at the restaurant, where it appeared to catch a glimpse of its prey.

A leopard was recently filmed walking through a restaurant in South Africa while it was hunting its breakfast. (iStock)

Eventually, the leopard walked away from the restaurant toward the bushbuck, according to Wiese.

“We felt complete awe, reverence, respect and gratitude,” Wiese said. “What a rare experience to have such an encounter with a leopard. The situation proved that wildlife and people can live and interact with each other in harmony and respect.”

“This was extremely rare for me and all I can say to someone in that situation is to stay calm and respectful,” she added.