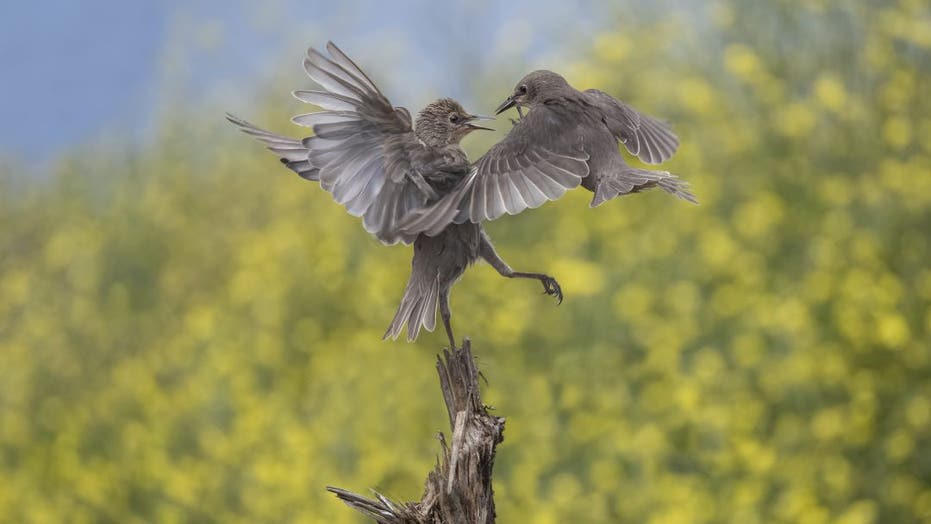 A pair of hungry and feisty starlings were spotted near St. Andrews, Scotland, duking it out over morsels of food.

The images were taken by wildlife photographer Abi Warner, near the famous Links Golf Course, British news agency SWNS reports. Warner, who has taken a number of wildlife photos in the past, remarked that the birds were quite boisterous.

"We discovered some starlings on the golf course, I went back several times to see them," Warner said. "They were both hungry and looking for food. I think one must have got some and the other wanted it."

Hungry starlings battled it out mid-air in a bid for food. The birds were snapped near St Andrews, Fife, as they tried to wrestle a scrap off each other. (Credit: SWNS)

WOODPECKER GETS AGGRESSIVE WITH RED SQUIRREL OVER NUTS: 'IT WAS LIKE THEY WERE GOING TO HAVE A FIGHT'

Though the starlings, which are native to Europe, Asia and Africa, were quite noisy, the tussle was over in seconds, Warner added.

"I think it was over within milliseconds, it is down to luck and chance getting this type of photo — it is freezing time," Warner explained.

Wildlife photographer Abi Warner, 52, took the photos in the lockdown when her movements were restricted to her local area. (Credit: SWNS)

The starling population in the U.K. has declined markedly since the 1980s, according to the Royal Society for the Protection of Birds (RSPB), something Warner said was "concerning."

"Recent data from the Breeding Bird Survey suggest continuing population declines affecting starlings in England and Wales since 1995," the RSPB said on its website. "The cause of the starling decline in the U.K. is unknown."

The RSPB added the starling population has fallen by 66% since the mid-1970s. As such, it is listed "as a bird of high conservation concern."