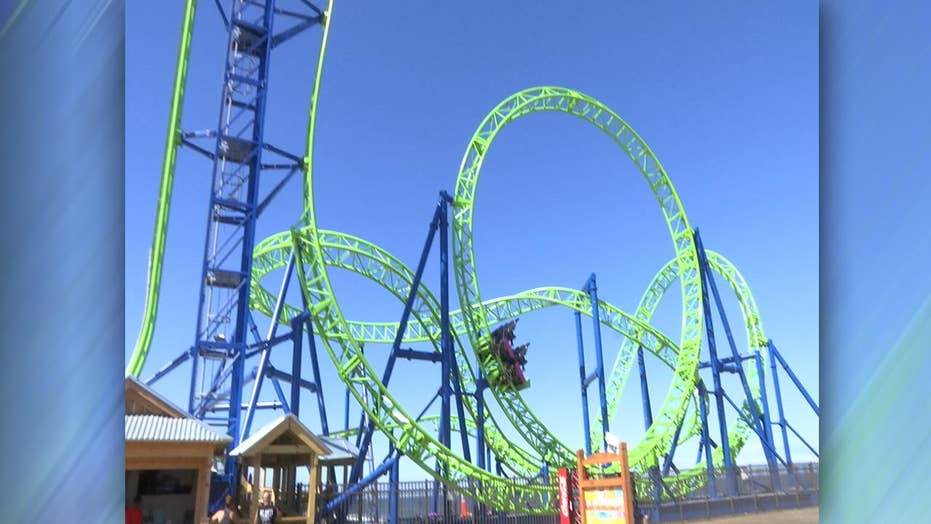 Superstorm Sandy devastated the Jersey Shore five years ago. And perhaps one of the most iconic images from the storm was the JetStar roller coaster sitting in the Atlantic Ocean, after it fell from the severely damaged Casino Pier in Seaside, N.J.

Pier owners are trying to turn the page on the devastation by replacing the iconic ride with Hydrus, a new bright-green roller coaster that’s been giving riders of all ages a thrill since opening in May.

'STAR TREK' DEBUTS AFTER YEARS OF DEVELOPMENT, BUT NOT IN U.S.

“It’s relieving. It took us a while to get us to this point … purchasing it, engineering and laying out the new pier,” said Frank Storino, one of the owners of Casino Pier. “It was a lot of work to get to this point, but it feels great now that we got there.”

Hydrus begins with a 72-foot vertical incline that leads into a (more than) vertical 97-degree drop. The cars race around the 1,050-foot coaster track at 45 miles an hour, through loops, an Immelmann turn and a heartline roll. Hydrus’ cars also have green eyes that glare down the track, determined to give kids a thrill during the minute-long ride.

The coaster, too, is already a big hit. Many parents who rode older coasters on the pier are bringing their kids to ride the new addition. Stacey Jaconski, of N.J., watched her son Tyler take a ride on a recent Friday morning; she used to ride Wild Mouse when she was as young as six.

“It’s a great atmosphere that we can come here now with this new roller coaster which is much more advanced than the Wild Mouse and much more thrilling. It’s great that my children can come and now ride it,” said Stacey.

“It was really fun and exciting to go on it,” added Tyler after riding Hydrus.

The new pier was rebuilt wider than the old pier, but it doesn’t go as far out into the ocean. Storino said that was done partially to help it withstand another Sandy level storm, if one should ever come. He said there were other factors involved, like cost and engineering.

“We had a basic footprint and we kind of knew what direction we wanted to go,” said Storino.

The Jersey Shore has been through a lot since the 2012 storm. It took years for many residents and businesses to rebuild. A fire on the Seaside Boardwalk in September 2013 was demoralizing to many who thought they were finally turning things around.

But residents and the Storinos are excited about not only the roller coaster, but the new Ferris wheel as well. They believe the Ferris wheel has the best view of the Jersey Shore. There are also old classics like the Tilt-A-Whirl, Musik Express and Bumper Cars that go back generations.

“When most of our customers come here, they’re looking to get away from their everyday life and this is their vacation,” said Storino. “It’s a great vacation, it’s always been. It’s close to home. They get in their car; we’re a short drive. We have millions of people within an hour radius of us."