Newly married Michael Cunnett of Epsom, England, has been sentenced to seven months in prison and a hefty fine after a drunken outburst on an Easyjet flight to his honeymoon, where he went on a homophobic rant and punched two flight attendants. The man's bride was not pleased with his actions, saying, 'Look at what you've done, you have f----- our honeymoon.'

A newly married man has been smacked with prison time and a hefty fine after throwing a drunken “tantrum” on an Easyjet flight to his honeymoon, during which he went on a homophobic rant and punched two flight attendants who tried to take away his e-cigarette.

After flying into the violent rage, the passenger and his wife were booted from the plane before takeoff.

It happened back in February, when Michael Cunnett of Epsom, England, boarded an Easyjet flight with his new wife for their honeymoon to Egypt, International Business Times reports. Soon after settling in his seat, Cunnett reportedly began to act “louder” than everyone else on the 9 a.m. flight, having allegedly drank four pints of beer before stepping onto the aircraft.

The newlywed proceeded to whip out an e-cigarette that he began to smoke before takeoff, prompting flight attendant Andre Botha to intervene — though the situation quickly turned for the worse. According to the outlet, Cunnett battered Botha with homophobic slurs before punching him twice, in blows that knocked the airline worker to the ground, as per the Mirror.

Flight attendant Christopher Bogley rushed towards Cunnett to mediate, before being punched as well.

The erratic passenger was soon escorted off the plane and arrested by police, according to the Mirror, and his dangerous antics ultimately delayed the plane’s takeoff by 45 minutes, IBT reported. 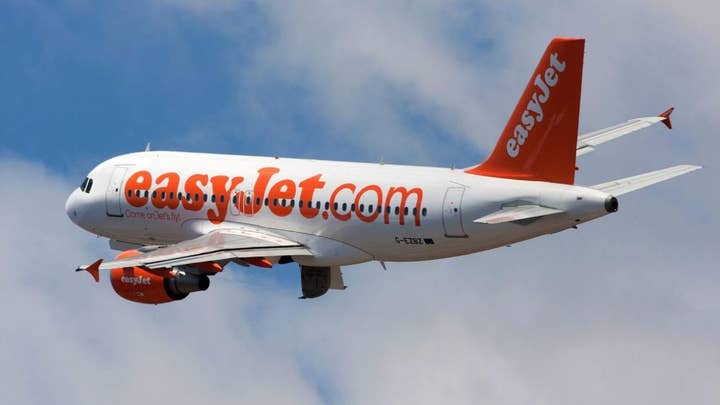 "Look at what you've done, you have f----- our honeymoon," his bride reportedly cried out.

Recently the man appeared in court in relation to the incident and he pleaded guilty to four charges, including common assault, criminal damage and interfering with performance of the aircraft crew, IBT reports. He has been sentenced to spend seven months behind bars and pay $1,316 in compensation to both Botha and Bogley.

Bogley, meanwhile, told those gathered that even though his assailant was not aware of his sexual orientation at the time of the attack, he is proud to be a gay man.

Cunnett pleaded guilty to four charges, including common assault, criminal damage and interfering with performance of the aircraft crew. (iStock)

"He didn't know my sexuality, but I am a gay man and proud of it,” the veteran flight attendant told the court, according to the outlet. “It is not a lifestyle choice, it is natural and no one deserves to be discriminated against for their sexuality. Many people struggle with it, and deal with mental health problems on a daily basis. His remarks to me were personal.

“If he travels again, my hope is that he will treat people with respect and acknowledge that he lives in a diverse society which is something that should be embraced, not ridiculed,” he continued.

Cunnett’s lawyer, David Forsyth, said that his client was "fully aware that his behavior was reprehensible" and was "thoroughly embarrassed and ashamed,” as per the Mirror. Cunnett further told the court that he did not harbor any homophobic views.

“It was like a child having a tantrum. You chose to drink four pints and to behave in a foul-mouthed, highly abusive manner,” presiding Judge David Rennie said at the trial. “Something of your true character did reveal itself… An attack on the perceived sexuality of these men was utterly shameful.”

“People like you find yourself on the edge of society. Only an immediate custodial sentence can be justified,” Rennie continued.

“EasyJet is pleased that the court has realized the seriousness of the offence which is reflected in the custodial sentence that has been imposed," a spokesperson said. "Whilst they are rare, EasyJet takes all incidents of disruptive behaviour very seriously. We have a duty to ensure the safety and wellbeing of all of our employees."

“Our employees are trained to assess and evaluate all incidents and act quickly and appropriately. We do not tolerate abusive or threatening behaviour and always push for prosecution," the rep for the carrier concluded.