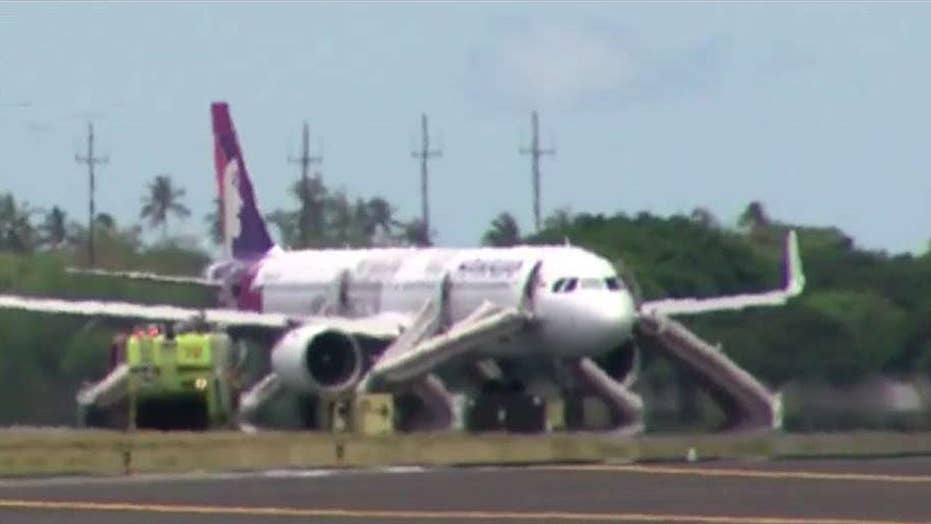 A Hawaiian Airlines flight from Oakland to Honolulu was forced to make an emergency landing after the cabin filled with smoke, sending seven passengers to the hospital.

Seven Hawaiian Airlines passengers – including a nine-month-old baby – were hospitalized on Thursday after an engine issue caused the cabin to fill with smoke during the trip from California to Hawaii, forcing an emergency landing in Honolulu.

This image taken from video provided by Hawaii News Now, shows Hawaiian Airlines Flight 47 on a runway after smoke filled the plane's cabin, forcing an emergency landing and evacuation, Thursday, Aug. 22, 2019 in Honolulu. The 184 passengers and seven crew members on board were forced to evacuate the plane using emergency slides. Seven people were taken to the hospital with respiratory complaints. (Hawaii News Now via AP)

According to passenger Lucky Cara, smoke appeared in the commercial plane’s cabin “all of a sudden" as the aircraft neared the Aloha State.

“I was scared. It just kept getting worse and worse, and there were a few people that were crying but they settled down,” Cara spoke of the sight, as seen in video footage obtained by Fox News.

Passenger Linda Puu echoed similar sentiments, describing the smoke as “really getting thick” before the flight touched down, News Now reports. Puu also praised the quick actions of the emergency personnel who responded to the scene, waiting for flight 47 on the tarmac.

“[An emergency landing is] something you think you’re never going to do but you go very fast and the firemen are down there catching you and helping you up,” she said.

The flight landed safely without issue, and all 184 passengers and seven crew members used evacuation slides to exit the aircraft.

American Medical Response spokesman James Ireland said a total of 11 patients had breathing complaints and seven were taken to the hospital with respiratory problems.

All injuries were considered minor, and one passenger was examined at the scene for injuries sustained during the evacuation.

Airport Fire Chief Glenn Mitchell commended the passengers' orderly behavior when exiting the Hawaiian Airlines plane, a procedure which took only about 30 seconds, noting that they wisely did not try to take their luggage with them.

“People were orderly. The 30-second timetable is a great tribute to the airline and their staff in making sure the evacuation was done not only efficiently but safely,” Mitchell told News Now.

As for technicalities, Jon Snook, Hawaiian Airlines’ chief operating officer, said that there was no active fire anywhere on the plane during the emergency.

On Friday, a rep for the airline told Fox News that the smoke was likely caused by an issue with the aircraft’s engine.

“We have since determined that a seal failed in the aircraft’s left engine, causing oil to leak onto hot parts of the plane’s engine and air conditioning pressurization system, resulting in smoke in the cabin,” Hawaiian Airlines spokesman Alex Da Silva said.

Da Silva further explained that “the performance of the engine was not affected” as the flight landed without issue, and that all passengers have since been reunited with their belongings.

“We sincerely apologize to our passengers for this incident, and thank them, as well as first responders and airport officials, for their cooperation and assistance in a swift and safe evacuation,” the official continued. “We are conducting a thorough inspection of the aircraft before returning it to service.”

Moving forward, Snook said Hawaiian Airlines is refunding passengers for the cost of their round-trip tickets and will give passengers a voucher for future travel.

The Hawaiian Airlines executive also thanked the crew and passengers for evacuating in an orderly way "in what could have been a complex and dangerous situation."

The National Transportation Safety Board and the Federal Aviation Administration also plan to launch their own investigations of the incident, according to USA Today.