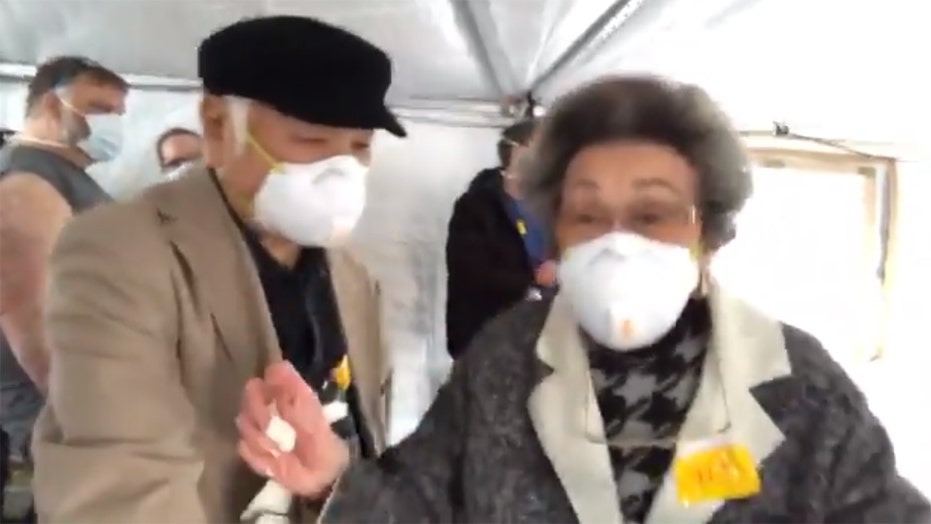 3,000 passengers on the quarantined cruise ship are being slowly disembarked and will be monitored closely for coronavirus symptoms; Claudia Cowan reports from the scene.

We'd be dancing for joy, too.

A young woman who recently disembarked from the Grand Princess cruise ship with her grandparents has been sharing hilarious footage of her time under confinement — including clips of her grandfather singing a “coronavirus” song and her grandmother doing a celebratory dance after finally getting off.

Adelina and Henry Serata passed the time by singing and practicing Tai Chi on the ship, but Adelina was much happier to get off. (Storyful via Michelle Heckert)

Michelle Heckert boarded the Grand Princess with both of her 87-year-old grandparents Adelina and Henry Serata on Feb. 21, KGO reported. Upon returning from a cruise to the Hawaiian Islands, 21 passengers and crew tested positive for COVID-19, and they were confined to their room while the ship was instructed to wait off the coast of San Francisco until it could safely dock.

But during that time, Heckert and her grandparents appeared to make the best of a bad situation — at least according to the videos she shared on Twitter. In the posts, Heckert’s grandparents practiced Tai Chi, learned how to make paper airplanes, tried out Zumba, and even wrote a “coronavirus” song.

Heckert, too, shared pictures of the meals and “activity drops” provided by the staff. She’s also been writing songs on her ukulele, mostly about the situation she and her grandparents had found themselves in.

And upon disembarking with her family on March 9, Heckert shared what’s sure to be an iconic GIF as soon as someone gets around to it: her grandmother performing a quick, celebratory dance after disembarking the boat.

“Safe to say they are relieved to be on land?” Heckert wrote in the caption.

Heckert and her grandparents are now under quarantine, as per protocol established for all Grand Princess passengers following disembarkation.

As of 5 p.m. local time on Tuesday, the Grand Princess had disembarked over 1,400 guests, Princess Cruises wrote in a media release. There were a total of 2,422 guests and 1,111 crew members on board, total.

The Grand Princess cruise ship docked at the Port of Oakland on Monday, carrying at least 21 individuals who had tested positive for coronavirus. The ship had previously been idling about 10 miles offshore since Thursday while passengers and crew awaited the results of tests and plans for disembarkation.

All disembarking American passengers are being put under mandatory 14-day quarantine at military bases in California, Texas or Georgia, with the majority (over 1,000 passengers from California) being sent to the Travis Air Force Base north of San Francisco and Marine Corps Air Station Miramar near San Diego. Foreign passengers were sent to their home countries for the completion of quarantine.

Not everyone was having as pleasant a time as Heckert and her grandparents, however: One woman claimed passengers were being forced to “fight” for terrible food, while two others have filed a $1 million lawsuit against the cruise line over the outbreak.