Passengers have described the terrifying moment a vortex sent their Qantas flight into a 10-second “nosedive.”

Hundreds of horrified travelers held hands ­believing they were about to die as the aircraft suddenly dropped over the Pacific Ocean on Sunday.

The dramatic ordeal afflicting passengers on the QF94 from Los Angeles to Melbourne is understood to have been caused by a vortex, or “wake turbulence,” caused by another aircraft that took off just two minutes earlier.

QF94 passenger Janelle Wilson told The Australian the “three-quarters-full” plane suddenly entered a “free-fall nosedive … a direct decline toward the ocean” for about 10 seconds.

“It was between 1½ and two hours after we left LA and all of a sudden the plane went through a violent turbulence and then completely upended and we were nose­diving,” Wilson told the newspaper on Tuesday.

“We were all lifted from our seats immediately and we were in a free fall. It was that feeling like when you are at the top of a roller coaster and you’ve just gone over the edge of the peak and you start heading down.

“It was an absolute sense of losing your stomach and that we were nose-diving. The lady sitting next to me and I screamed and held hands and just waited but thought with absolute certainty that we were going to crash. It was terrifying.”

Thankfully nobody onboard the aircraft, with a seating capacity of 484, was injured.

According to flight safety experts at SKYbrary, wake vortexes cause severe turbulence, which is generated by the passage of another aircraft in flight. Basically, there is not sufficient separation between the flights.

However, a Qantas spokeswoman told The Australian there had been no breach of separation standards because the two A380 aircrafts were understood to be apart by 20 nautical miles and 1,000 feet in ­altitude.

There have been several incidents of wake vortexes causing serious injuries and even deaths after pilots have lost control of the aircraft.

“A cross-track encounter en route is likely to lead to only one or two sharp ‘jolts’ as the vortices are crossed,” the SKYbrary site states. “In either en route case, injuries to unsecured occupants can result, both passengers and cabin crew.

“Since most operators ensure that passengers are secured during intermediate and final approach and during initial climb after takeoff, it is cabin crew who will be most at risk of injury if they are not yet secured during the later stages of an approach.”

In 1993, the crew of a domestic passenger charter flight in California failed to leave sufficient separation between their aircraft and a Boeing 757 and lost control or the plane, which crashed killing all occupants.

More recently, in 2008, an Air Canada Airbus A319 traveling over the northwestern area of the U.S. encountered unexpected sudden wake vortex turbulence from an in-trail Boeing 747-400.

Pilots then responded with potentially hazardous flight control inputs, which led to disturbance to the aircraft trajectory.

An unintended descent of 465 yards followed. Because cabin service was in progress and seatbelt signs were left off, it led to cabin service carts hitting the cabin ceiling and several passengers were injured, some seriously.

Wake turbulence was also ­blamed for the near-stall of a Qantas 747 flight from Melbourne, about 68 miles from Hong Kong, in April last year. 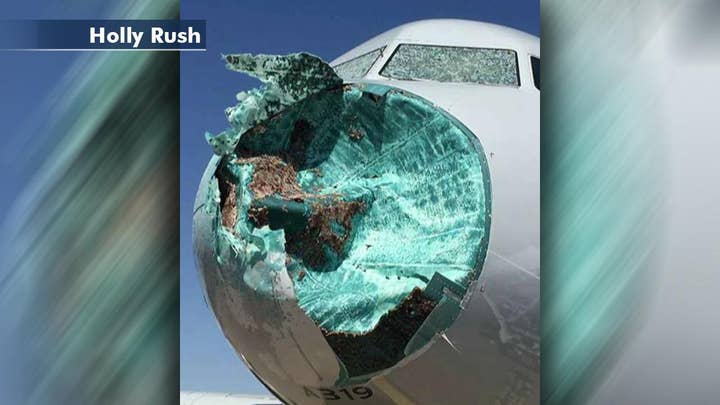 Last year, Germany’s Federal Bureau of Aircraft Accident Investigation called for an urgent review of aircraft separation standards after a near disaster when a ­private jet was hit by wake turbulence from a Sydney-bound ­Emirates A380 above the Arabian Sea.