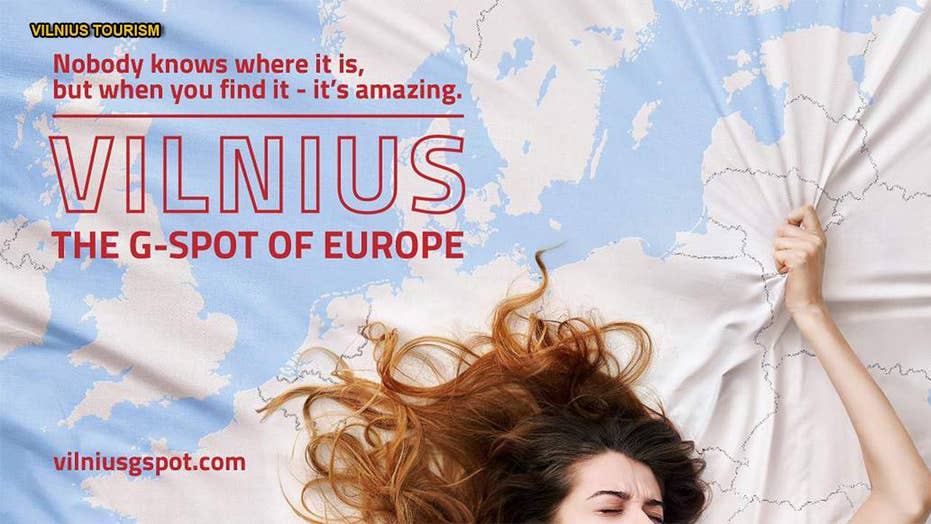 An X-rated advertising campaign for Vilnius, the capital of Lithuania, has won an international travel award. Advertisements describing the city as 'The G-Spot of Europe' have reportedly led to a boost in tourism.

A cheeky X-rated advertisement for little-visited Vilnius, the capital of Lithuania, won an International Travel & Tourism Gold Award this week presented by World Travel Market London, and has been credited with increasing travel to the city.

WATER ON MOST MAJOR AIRLINES NOT SAFE FOR DRINKING, STUDY SHOWS

The tourist-targeting advertisement, which initially received mixed reactions, calls Vilnius “The G-Spot of Europe,” with the edgy tagline reading “Nobody knows where it is but when you find it – it’s amazing.”

The controversial campaign, which depicted a woman lying down with her face contorted, seemingly in pleasure, gripping a blanket with a map of Vilnius, launched in 2018 – weeks before Pope Francis visited the country. A follow-up ad showed a tourist overcome with ecstasy standing in front of a building in the capital.

The city doubled-down on the message and created a website around the campaign, which asks prospective tourists to “build your personal pleasure map” – which they can either do by answering double-entendre questions, or “skip the foreplay,” an option that will take users to the site’s map of Vilnius and its “pleasures.”

Though the advertisement, which was created to attract a more millennial audience, was met with some backlash, the Advertising Standards Authority concluded the ad was not “exploitative or degrading” to the female character used and thus dismissed the one complaint it received, KVIA reported.

Overall, the campaign has worked and led to a 12 percent increase in tourism for the city, Travel Pulse reports.

“International tourism is a highly competitive field where only a few manage to stand out,” Inga Romanovskiene, head of the official development and business promotion agency Go Vilnius, said in a statement, Travel Pulse shared.

“Even competing with the giants of tourism -- such as Las Vegas -- was a great achievement.''