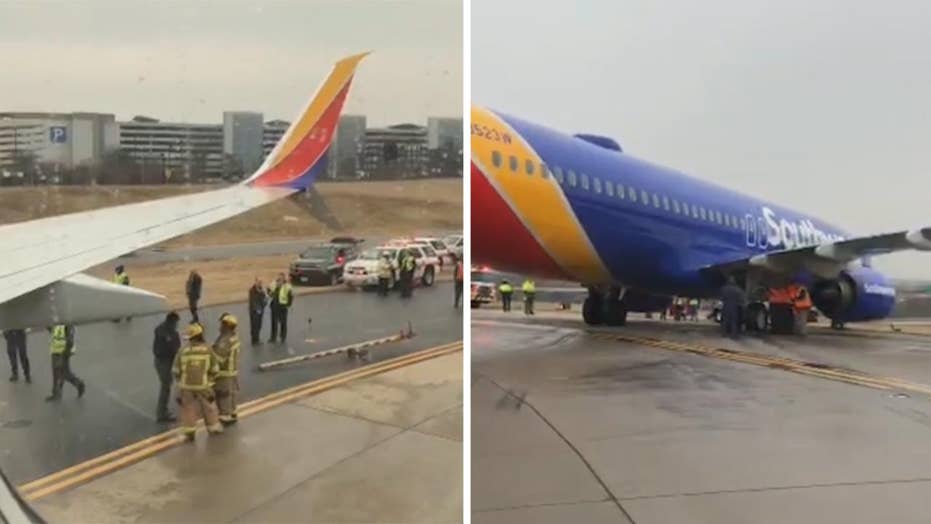 A Southwest Airlines plane carrying 143 passengers slid off a taxiway at an airport near Baltimore on Wednesday morning, the Federal Aviation Administration confirmed.

The Southwest flight was preparing to take off for Montego Bay in Jamaica when the incident occurred, according to Southwest. The Baltimore-Washington International Airport in Maryland has said passengers were transported from the outbound aircraft shortly afterward, but only wrote that the plane had "stopped on the taxiway pavement." BWI further stated that there were no reported injuries.

The Federal Aviation Administration reported that the incident occurred at around 10 a.m. EST, and added that the agency intends to investigate what caused the plane to slide "sideways" while preparing to depart.

According to social media posts from passengers, the Jamaica-bound flight was taxiing to the runway when it skidded off into the grass. A passenger on the plane also claimed that the pilot attributed the incident to an “icy spot” on the taxiway, though she wasn't convinced that was accurate.

“What was pilot thinking? Hitting the throttle before making the turn with only grass in front of him?!” wrote Instagram user Donna Edmonds.

Emergency crews were also said to be “everywhere” by observer Todd Miller, who posted a photo of the aircraft on Facebook shortly before 11 a.m. In it, the Southwest aircraft appeard to be slumped forward toward its nose.

Both the FAA and BWI say the airplane will be towed off the taxiway and back to a gate, although WBAL reported that the plane was still sitting on the runway as of 11:30 a.m. Other flights out of BWI are continuing to operate, the airport said via Twitter.

A representative for Southwest Airlines echoed BWI's statement that there were no injuries to report, adding that customers will be continuing on to their intended destination of Montego Bay on a different plane.

"At approximately 10:00 a.m. local time on Tuesday, February 7, the front of the aircraft operating Southwest flight 906 from Baltimore Washington to Montego Bay International Airport traveled to the edge, but did not exit, the taxiway prior to departure," a spokesperson for Southwest said in a statement obtained by Fox News. "The 143 passengers and six crew members safely deplaned via airstairs and were bussed to the airport terminal. There are no injuries to report.

"The Customers onboard the flight will be accommodated on a different aircraft and are scheduled to arrive in Montego Bay approximately three hours behind schedule. As always, the safety and support of our customers and employees remains our primary focus and we are working to get them on their way as quickly as possible," the statement read.

This is the second time a commercial plane skidded off a runway or taxiway in recent months. In January, a Pegasus Airlines flight skidded down a small cliff after landing at a Turkish airport.