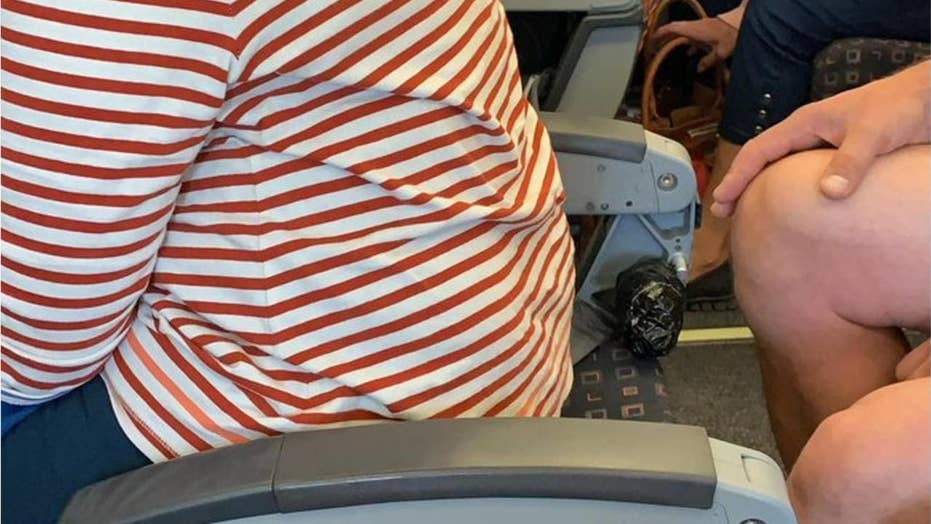 EasyJet says 'backless' seat photo may have been staged on a plane with open seats.

Just a few days after the British budget airline fanned the flames of a social media firestorm that began when a photo emerged of a "backless" seat on one of the carrier's planes, an image of another uncomfortably broken chair has again caused a stir.

While reps for the carrier have since clarified that both photos featured “inoperative” chairs, and that no passenger would ever be assigned to sit in such unsafe conditions, critics were quick to shame the apparent offense anyway.

On Aug. 12, YouTube star Calfeezy called out EasyJet for the allegedly busted seat on Twitter, where he boasts a following of 1.4 million.

“Check this seat on my flight,” the gamer captioned two photos of a man trying — and failing — to get comfy in an EasyJet seat without a bottom cushion. The post has since been liked more than 6,000 times.

Commenters instantly likened the cushion-less seat to a “cheese grater,” and blasted the company for what they believed to be an unacceptable situation.

“Is this @easyJet again with a bad seat?” one user asked.

“Personally I would not have that,” one chimed in.

“2nd incident in a week. @easyJet dont you think these planes should be taken out of circulation until you fix your ongoing safety concerns?” another charged.

Twittizens evidently glossed past a key note from Calfreezy — otherwise known as Callum Airey — who explained that no one actually sat in the seat during his recent trip in the high skies.

When contacted for comment, reps for the carrier told Fox News that the mysteriously missing seat cushion had, in fact, been removed for cleaning, and that no one was allowed to sit in the “inoperative” chair.

“The seat cushion has been removed for cleaning. No passengers were permitted to fly in this seat as it was inoperative during this time,” a spokesperson said on Aug. 13.

When contacted for comment, reps for the carrier told Fox News that the mysteriously missing seat cushion had in fact been removed for cleaning, and that no one was allowed to sit in the “inoperative” chair. (iStock)

“Safety is our highest priority and EasyJet operates its fleet of aircraft in strict compliance with all safety guidelines,” they added.

This marked the second time within a week that the airline took flak for one of its seats. On Aug. 6, the European airline was mercilessly trolled when another photo circulated online of a passenger sitting in a seat with no back — though company reps have since argued that the photo was staged.

“No passengers were permitted to fly in these seats as they were inoperative awaiting repair," the company said of the first photo fail in a statement obtained by Fox News.

The spokesperson added that the plane wasn't even full — there were five other open seats when it departed — and that the backless seat has now been repaired.