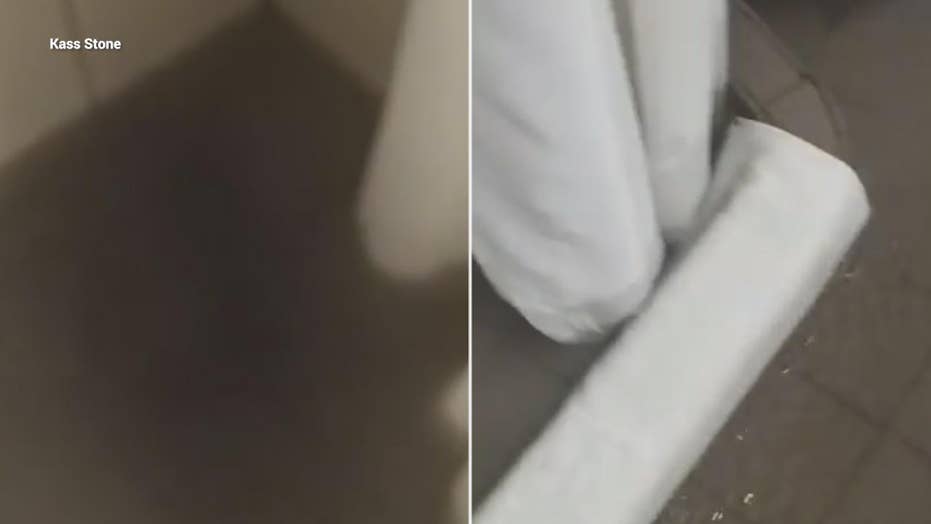 Kass Stone, a cruise passenger from London, England, made claims that his family vacation was ruined because of a cabin flood that smelled like raw sewage.

A cruise passenger claims his recent family vacation was ruined after his family's cabin began flooding with “waste water” that smelled like sewage.

Kass Stone, from London, tells Fox News he had been seeking a refund from TUI Cruises since May, but hadn’t even heard from the company until he shared footage of the ordeal on social media, showing the water bubbling up from the shower stall.

“Our cabin flooded with waste water,” Stone captioned the Facebook video, taken shortly after departing from Dubrovnik on May 23. “No alternative [accommodation] offered in spite of persistent stench, wet carpet and overall unhygienic conditions, especially for two young children.”

In the post, Stone added that it had been over a month since the ill-fated vacation on TUI’s Marella Celebration liner, and tagged it as both a “#nightmarecruise” and a “#sewagecruise.”

The ship couldn’t even move Stone and his family to a new room but instead brought in a loud fan to try and dry the cabin’s carpeting. His family was also forced to shower in the spa area for the remainder of the weeklong trip.

Stone admitted that TUI did try to make it up to them, but their efforts were “pitiful.”

"My wife mentioned she smelled something and upon opening the bathroom discovered waste water pouring out of the shower drain," Stone told Fox News. "It was starting to spill over into the cabin." (Kass Stone)

“The day it happened, after we returned from the spa we had to shower in, we found a bottle of wine and a big serving tray on the cabin's desk,” he tells Fox News. “When we removed the lid, we found four chocolate-covered strawberries and an apology note from the staff.

“We had a good laugh about the four strawberries on that big tray. It was pitiful,” he added.

“You expect maybe a sunburn or a hangover on holiday, but not possible botulism from huffing fetid sewage air. It's ridiculous.”

Stone said the crew offered the family a 50-pound credit for their troubles, and later tried to “pressure” him into signing a form acknowledging the compensation.

“We refused to accept what would have been 12.50 pounds ($62.42) per person — which would not have covered dinner for the family in one of the ship's restaurants. My kids had to breathe in the stench of that sewage, which had soaked into the cabin's carpet,” Stone said.

“You expect maybe a sunburn or a hangover on holiday, but not possible botulism from huffing fetid sewage air,” he added. “It's ridiculous.”

A representative for TUI, which operated the Marella Celebration cruise, says the company is reaching out to Stone with a "gesture of goodwill." (iStock)

On Thursday, a representative for TUI released a statement apologizing for Stone’s ordeal, adding that they intended to “offer a gesture of goodwill.”

“We would like to apologize for the Stone party’s experience on their cruise,” TUI said in a statement obtained by Fox News. “When the customers raised their concerns onboard the ship, our team worked hard to resolve the issue. We understand this must have been a very disappointing experience and we are in contact with the customer to apologize and offer a gesture of goodwill.”

On Friday morning, Stone confirmed that TUI did offer compensation, though he was not entirely happy with the 845-pound ($1050) "holiday voucher" they provided, calling it "worse than four strawberries."

"That voucher doesn't cover a holiday. Not even close," Stone told Fox News on Friday. "We'd have to spend thousands of our own pounds to go anywhere with a company that has already failed us. At least the strawberries were no strings attached."