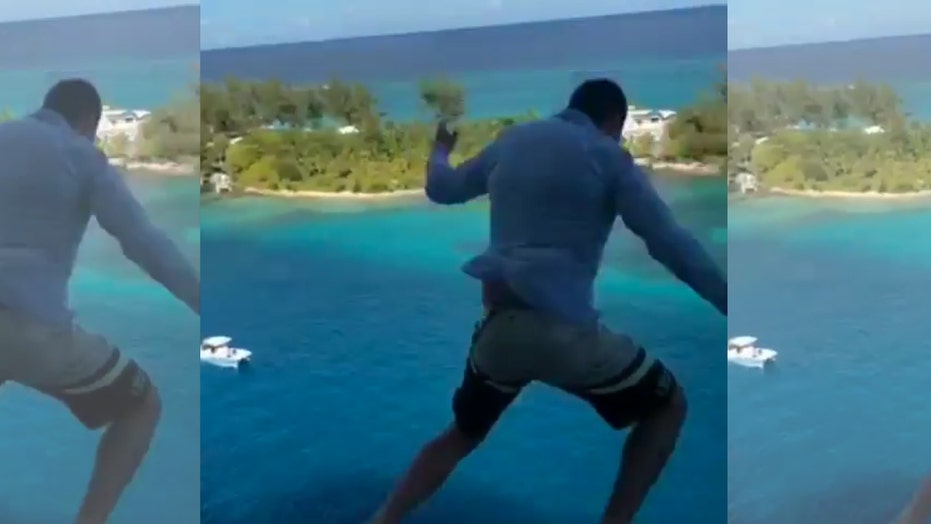 Watch this: Man jumps off side of cruise ship in stunt to impress friends

A passenger sailing on the Symphony of the Seas has been banned for life from ever sailing with Royal Caribbean after he leaped from the ship and into the water below, while it was docked in Nassau, Bahamas.

Nick Naydev's friends may be laughing in the video, but Royal Caribbean doesn’t think he's so funny.

The cruise line confirmed to Fox News on Thursday that Naydev, a recent passenger on the Symphony of the Seas, has been banned from ever sailing with Royal Caribbean after he leaped from the ship and into the water below while it was docked in Nassau, Bahamas. And his friends have been nixed too.

“This was stupid and reckless behavior and he and his companions have been banned from ever sailing with us again,” the manager of Royal Caribbean’s corporate communications tells Fox News.

Naydev, 27, from Vancouver, Wash., first shared footage of himself jumping from the 11th-floor of the Symphony of the Seas on Friday. In it, Naydev’s friends are seen helping him stand on the railing before Naydev takes the plunge.

"Full send," Naydev captioned the video, later telling Fox 13 that he estimated the drop to be about 100 feet.

Nick Naydev, 27, shared footage of his friends helping him up on the railing before he jumps from the Symphony of the Seas. (Instagram/naydev91)

Directly after the stunt, Naydev was told by Royal Caribbean staff that he would not be allowed to reboard the ship, and would have to find his own way home from the Bahamas.

The cruise line also informed local police, though Naydev told Fox 13 that they declined to press charges, because “fortunately the police thought the whole situation was amusing.”

Naydev has since expressed remorse for his actions, saying he hopes he doesn’t “inspire anyone to try this” and injure themselves.

"I am truly astonished at how this video has spread throughout the Internet. I did not think this through before I jumped,” Naydev told Fox 13. “My idea was this would be a good laugh for my friends and I would just swim back to shore and continue my vacation.”

One of Naydev’s friends, however, told Yahoo! Lifestyle that Naydev is known for pulling off daring jumps.

“He’s jumped from those kind[s] of heights before, and we didn’t really care about the consequences with the cruise company,” said Konstantin Kryachun, the friend who filmed the jump. “We just wanted to get a video of it and make it go viral.”

Naydev’s video had amassed 81,000 views as of Thursday morning. Commenters also chastised the group for the “dumb” stunt, telling Naydev he’s lucky to be alive.

The 27-year-old later confirmed on Instagram that he did hurt his neck and tailbone during the jump, and experienced lasting pain for about three days, but is “good now.”

Royal Caribbean confirmed to Fox News that the cruise line is seeking legal action against the passenger.