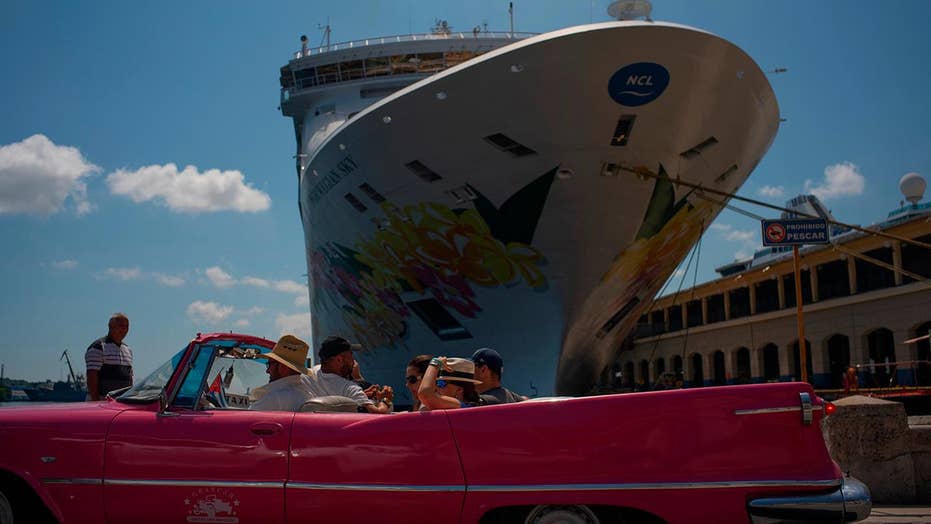 Under the ban, U.S. citizens can no longer travel to the Caribbean country by cruise ships or by private or corporate aircraft and boats.

Reps for Carnival Cruise Line, Royal Caribbean Cruises and Norwegian Cruise Line announced that they are monitoring the situation as they work to make appropriate arrangements with customers affected by the move.

Reps for Carnival told Fox News that the company will be substituting their upcoming call to Havanna with a suitable “replacement port.”

“Guests currently aboard Carnival Sensation’s June 3 sailing will be calling on Cozumel this Thursday instead of Havana,” a spokesperson said. “We recognize Havana is a unique destination and may have been the reason for the selection of this itinerary. Along with our apologies, guests will receive a $100 onboard credit.”

CARNIVAL TO START DELIVERING BEER ON CRUISES, BUT THERE'S A CATCH

The Carnival spokesperson continued to detail that the cruise line will have more information on the situation within the next two to three days, and customers should follow their website for more updates.

Likewise, officials with Royal Caribbean wrote on Twitter on June 4 that they were investigating the news “to understand the impact on our itineraries” in a larger sense.

“For now, we're adjusting the June 5 and 6 sailing itineraries, which will no longer stop in Cuba. We are communicating the changes with our guests,” a company rep wrote.

Norwegian Cruise Line released a similar statement detailing that officials are scrutinizing the new rules and consulting with lawyers and trade experts on how to proceed.

“We are closely monitoring these recent developments and any resulting impact to cruise travel to Cuba,” a rep said, as per the Associated Press. “We will communicate to our guests and travel partners as additional information becomes available.”

On Tuesday, the Trump administration banned cruise ships and a popular category of “educational travel” to Cuba in an attempt to cut off cash to the island nation’s communist government. In addition, most private planes and boats are barred from visiting Cuba under the new policy.

In May 2016, under the Obama administration, cruise travel from the US to Cuba was opened up. The simple, one-stop option quickly became the most popular form of American leisure tourism to the country, bringing 142,721 visitors in the first four months of the year, over a 300% increase over the same period last year.

The new restrictions are part of a broader effort by the administration of President Trump to roll back the Obama administration efforts to restore normal relations between the United States and Cuba, which drew sharp criticism from the more hardline elements of the Cuban-American community and their allies in Congress.