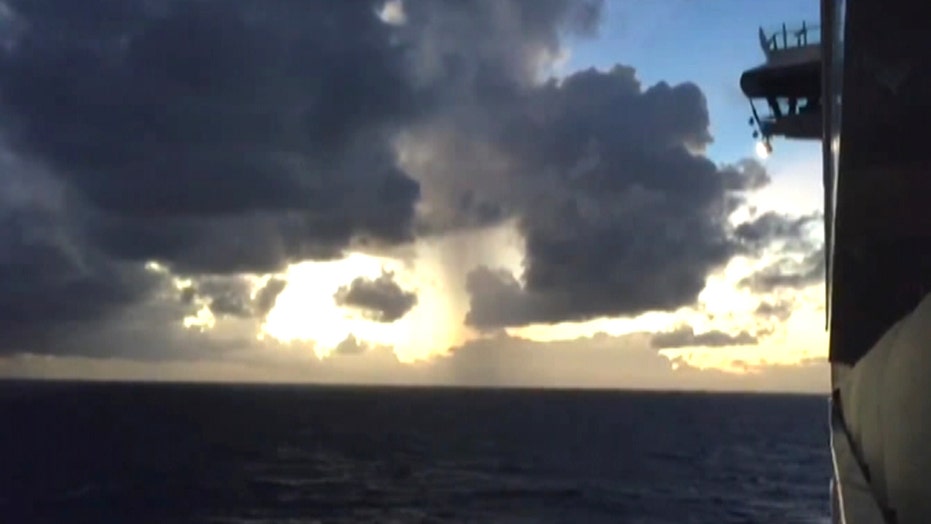 The Coast Guard suspended search efforts Saturday for a missing man who was captured on video going overboard on a luxury cruise ship near the Bahamas.

"We would like to extend our deepest condolences to the loved ones and all that have been affected by this tragedy," Capt. Todd Cohheshall, Coast Guard 7th District chief of response management, said.

The Coast Guard station said it received a report about 1 a.m. Friday from the Royal Caribbean Oasis of the Seas cruise ship stating a man fell into the water after clinging to a life boat aboard the cruise ship.

Horrified passengers watched as the man clung to the edge of the lifeboat for more than a minute and then plunged into the ocean.

(Warning: Video may be disturbing)

It wasn't clear why the man jumped toward the lifeboat or how he came to cling at its side. Royal Caribbean and the Coast Guard said only that the 35-year-old man, from Brazil, was on the seventh deck of the massive Oasis of the Seas when he apparently jumped onto the life boat one deck below. His name wasn't released. Calls and emails to the cruise line weren't immediately returned.

The short video clip was briefly posted to YouTube but then taken down. It shows several people looking on, apparently trying to help as the man clings to the boat. One man screams, "Hold on to him, don't let him go" and says he won't go away until the man is back onboard. A woman tells everyone to stop yelling because people are trying to help him.

The clinging passenger appears to look toward the deck in the seconds before he plunges into the water. The woman says she can see him in the water -- "He's there!" -- and tells people to get a lifesaving flotation device to toss to him. "Throw it over!" she says. The video then ends.

It was unclear who took the video, but it appears to be shot from a higher deck.

The Oasis of the Seas sails to the Caribbean from Port Everglades in Fort Lauderdale. The ship left Saturday on a seven-day trip.

As part of the search effort, the cruise ship sent two search boats to look for the man.