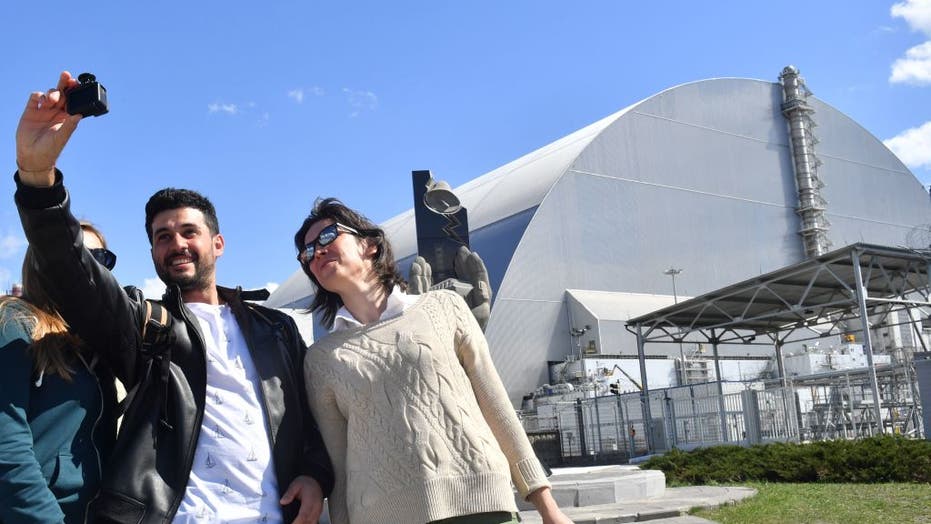 Tourism is reportedly thriving at one of the world’s most infamous disaster sites.

Tour operators near the Chernobyl nuclear plant say they’re seeing increased demand of up to 40 percent over last year’s numbers — and they’re crediting the boost to the release of HBO’s “Chernobyl” miniseries.

Tourists in the Exclusion Zone take selfies in front of the New Safe Confinement Structure, completed in 2017, which covers the fourth reactor of the Chernobyl nuclear power plant. (Sergei Supinsky/AFP/Getty Images)

“Many people come here, they ask a lot of questions about the TV show, about all the events. People are getting more and more curious,” tour guide Viktoria Brozhko told Reuters.

INFAMOUS 'SEX ISLAND' IS BACK WITH 'SECRET' LAS VEGAS PARTY

Sergiy Ivanchuk, the director of SoloEast tours, said bookings in May — when the series began airing on HBO — surged 30 percent over last year. And for June July and August, 40 percent.

The SoloEast tours website now even features a still from HBO’s “Chernobyl” overlaid with the words, “As seen on HBO miniseries.”

Itineraries offered by local tour companies include guided bus trips into the Exclusion Zone, stops in abandoned villages near Chernobyl, and then “sightseeing” in the town, which itself contains memorials and the robotics used to clear hazardous materials following the disaster. They can also stand outside the fourth reactor, now covered by a New Safe Confinement structure.

SoloEast even provides an “ecologically clean” lunch to enjoy at the “Chernobyl canteen.”

Yaroslav Yemelianenko, who runs the similar Chernobyl Tour company – which provides access to an executive bunker seen in the series, as well as the option for an aerial tour – expects to see the same tourism bump of up to 40 percent following the airing of the miniseries.

Both tours' websites stress the safety of the excursion, with SoloEast advertising “100-percent safe” tours – and urging that a trip to Chernobyl poses less radiation exposure than a long flight – and Chernobyl Tour claiming its short visits pose very little risk, and that the tour stays far from areas of acute radiation.

“During the entire visit to the Chernobyl exclusion zone, you get around two microsieverts, which is equal to the amount of radiation you’d get staying at home for 24 hours,” Brozhko said.

There are varying estimates for the final death toll from Chernobyl, due to the long-term effects of radiation. In 2005, the International Atomic Energy Agency estimated the total death count from the disaster at around 4,000, whereas the World Health Organization has estimated 9,000 deaths. A recent study out of Belarus, meanwhile, estimated that number at 115,000.