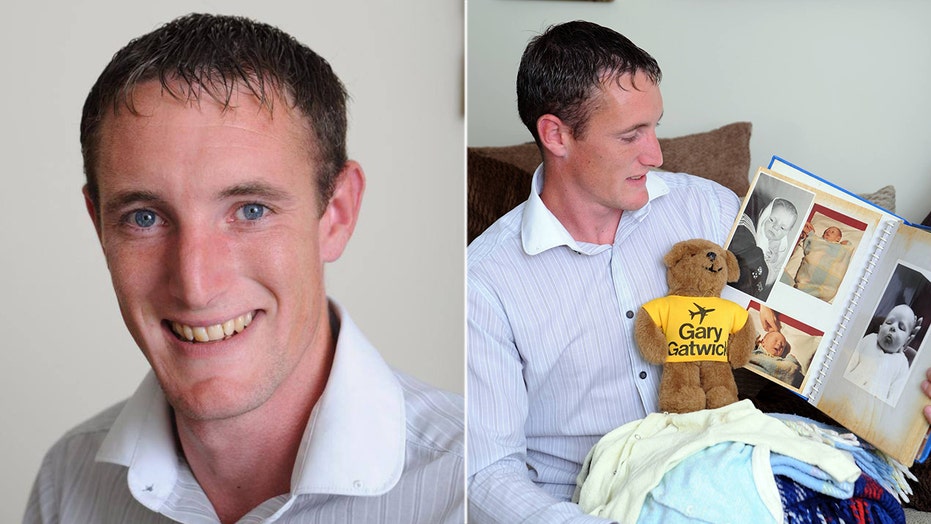 After fifteen years of searching, one U.K. man abandoned at Gatwick Airport as a newborn has finally found his birth parents.

On April 10, 1986, Steve Hydes, made national headlines when he was found by a female duty-free sales worker on the floor of a bathroom in the London air hub, Yahoo News UK and The Independent report. Wrapped in a tartan shawl and wearing two baby onesies, his origin story was all but a mystery.

Hydes, now 33-years-old, was nicknamed “Gatwick Gary” in honor of the airport’s mascot, as per the Independent. Taken into foster care, the man was adopted by John and Sandra Hydes, who named him Steven Gary Hydes and raised him with their three daughters, according to the Crawley & Horley Observer.

Steve Hydes poses with the stuffed bear and clothing he was found with on April 10, 1986. (Steve Hydes)

Shortly after his 18th birthday, Hydes began the emotional search for his birth parents. According to the Independent, the challenge was heightened, as the police files on his case had reportedly been destroyed.

Fast-forward to the present – fifteen years later – and the man, now a father of two himself, reported last week that his mission was finally accomplished.

With the help of genetic genealogists, Hydes was able to successfully track down his parents and siblings, as detailed in a May 11 Facebook post that has since been liked over 16,000 times.

“After 15 years of searching I am happy to confirm that with the very hard work of genetic genealogists… we have been able to trace and confirm my birth family,” Hydes wrote online. “Unfortunately my birth mum has passed away so I am unable to find out exactly what happened and why.”

An image of the stuffed bear and clothing Steve Hydes was found with on April 10, 1986.  (Steve Hydes)

“However I have found my birth father and siblings on both sides, who were all unaware of my existence,” he continued.

“As you can imagine this is quite a sensitive issue to all involved and very new to us all, but I wanted to take this time to thank everyone for their continued support over the years,” Hydes said, going on to thank “all those who have been involved and have helped with my search.”

“The work the genealogists do is incredible and for years they have worked so hard and it is thanks to them they are solving cases like mine,” he mused. “More people are having their DNA tested every day and I hope this and my story can help raise awareness and prevent other babies from being abandoned.”

When contacted by Fox News on May 14, Hydes politely declined to comment during this “sensitive” period.