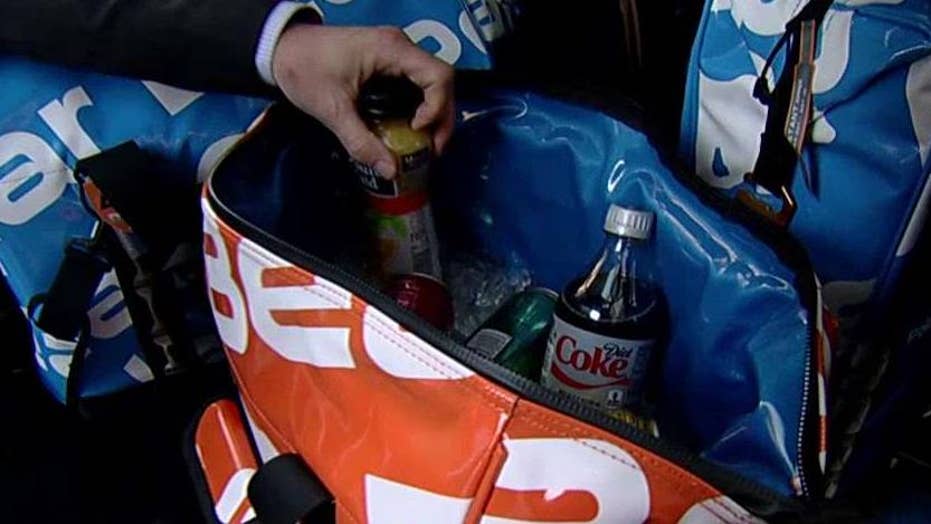 Kurt the 'CyberGuy' talks tech that helps with traffic, safety and entertainment

Summer travelers may well find themselves stuck in long security lines and squeezed into cramped seats. For frequent travelers, or those who can and want to pay extra, perks are available including upgrades to first-class seats, airport lounges and free food.

Are the benefits worth the cost? The Associated Press sent two journalists on a two-day visit to Orlando, Florida — one with perks, and one without.

Scott Mayerowitz, who until recently covered the airline industry, has elite status with airlines, hotels and car rental agencies. He also has a five-year membership in a Transportation Security Administration program that lets him use fast-track lanes at airport security. Premium credit cards aimed at frequent travelers get him into airport lounges.

Candice Choi, who covers the food industry, has no such perks.

Scott saved more than 45 minutes total in waiting in lines at the airport, avoided crowds and got free food along the way. Candice thought Scott's biggest advantage was the time he saved. The extra space and food he got seemed nice, but less meaningful for a short trip.

Here's how their experiences differed:

Scott breezed through the TSA's checkpoint in less than 2 minutes without having to take off his shoes. His laptop stayed in his suitcase, thanks to his membership in the Global Entry program, which includes expedited screening.

It took Candice nearly 15 minutes to get through regular security, which included taking off her shoes and jacket. There was also a delay after she forgot to remove a bottle of water from her purse, and found herself waiting shoeless for her belongings as a TSA agent searched her bag.

On the return flight, Scott cleared security in about 3 minutes. It took Candice 19.

Scott headed for the roomy airline lounge, and took advantage of the free Wi-Fi, newspapers and breakfast spread that included bagels, muffins, hard-boiled eggs, fruit, yogurt and coffee. A day pass costs more than $50, but credit cards aimed at frequent travelers often include lounge access as one benefit that comes with a hefty annual fee of $450 to $550. Scott's card also refunded him the $100 TSA Global Entry fee.

At the gate with everyone else, Candice found a seat with a table. There were outlets to recharge phones and a tablet to order food and get flight updates. She generally avoids eating much right before and during flights, though, and didn't buy any food for the gate.

BOARDING AND THE FLIGHTS

Scott's airline status means he boards early, and often gets upgraded for free to first class — where there are no middle seats and passengers still get hot meals. Finding space for luggage in the overhead bins also isn't a worry.

On this trip, Scott got upgrades both ways on Delta Air Lines. He was a served an egg sandwich, yogurt and fruit on the way to Orlando, a second breakfast after the first he enjoyed earlier in the lounge.

Candice waited in a disorganized crowd by the gate to board. Her pass said "Zone 3," which was really the sixth of Delta's seven boarding groups. The last passengers to board often struggle to find space for their bags, but there was still room in the overhead bins by the time Candice neared her seat.

Booking the flight a week in advance left Candice with a handful of middle seats to pick from. That can feel stifling for longer flights or with annoying seatmates, but was tolerable for a two-hour flight. She got cranberry juice and peanuts and defended her sliver of an armrest.

Once in Orlando, Scott was off the plane in seconds. Candice was six minutes behind as other passengers gathered their belongings and the plane cleared out.

Members of car rental loyalty programs, even those without status, get to skip the lines at the rental counter. So Scott headed straight to the garage. He spotted a BMW X3 SUV in a lane of cars for those with National's "executive elite" status, which comes with 12 annual rentals. He settled into the plush leather seat, turned on the nine-speaker stereo and drove off.

Candice isn't a member of any car rental programs. But on a Thursday morning, there was only one person ahead of her in line. Registration was quick and she could have picked a car from a fleet that included midsize options like the Hyundai Elantra and Toyota Corolla.

Ultimately, Scott picked her up in his rental SUV.

At the parks, it was Candice's turn to be elite. Both paid $165 for a two-park ticket, but Candice added on a $99 "Universal Express" pass that let her skip lines. With Orlando at 94 degrees and humid that day, she couldn't have been happier.

On The Incredible Hulk roller coaster, Candice went through a separate entrance and to the front of the line. It took about 10 minutes for the entire experience. On the way out, she waved at Scott, who had barely moved in line in the sweltering heat.

It took Scott 42 minutes, despite it being a slow day at the park.

Scott was given a corner room on the 26th floor of a newer tower with floor-to-ceiling windows looking over the city. He also got access to the hotel club with free breakfast and drinks, and a nighttime happy hour with complimentary beer, wine and desserts.

Elite status at hotels starts with 10 nights at a chain. The benefits start at check-in, where members often get a dedicated line. On this trip, there was nobody waiting to check-in, so there was no advantage.

Candice had a room with comparable furnishings on the 12th floor of the hotel's older tower. But she didn't get the huge windows, and her view of the pool was slightly obstructed.

Scott was rousted from sleep at 6:45 a.m. the next morning, when an electrical fire meant an evacuation and a trek down 26 flights of stairs. Later, the front desk manager left a voicemail apologizing for the rude awakening and giving Scott 15,000 points — enough for a free night at the same hotel.

The disturbance wasn't an issue for Candice — there was no fire alarm in her tower, so she got to sleep in.