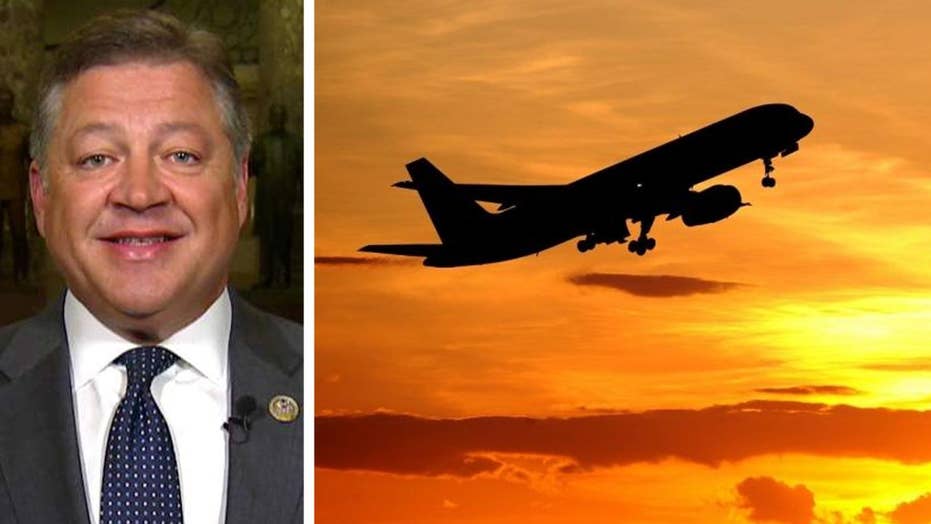 Rep. Bill Shuster on keeping passengers safe in the skies

It seems like everyone on an airplane has a hair trigger these days.

On April 21, a passenger aboard an American Airlines plane got into an altercation with a flight attendant he believed had hit a woman traveling with 15-month-old twins as he forcibly removed a stroller from her hands. The flight attendant was suspended.

Twelve days earlier, on April 9, a physician from Kentucky was pulled out of his seat and dragged off a United Airlines plane when he refused the airline’s demand that he give up his seat on a full flight from Chicago to Louisville. Dr. David Dao suffered a concussion, a broken nose and lost two front teeth in the incident, his lawyer claimed. On Thursday, the lawyers announced that Dao and United had reached an undisclosed settlement.

PASSENGERS CAUGHT IN VIOLENT PRE-FLIGHT BRAWL ABOARD ALL NIPPON AIRWAYS

Both incidents were recorded by other passengers on their cell phones, posted to social media and viewed by millions who now are understandably asking: What’s going on?

"They're shaming us on the media, without knowing the whole story."

A recent study published by the Proceedings of the National Academy of Sciences found that incidents like these are rare, but when they’re recorded on video, the public is quick to defend the passengers-- and blame the flight crew.

But the problem, says a flight attendant with a major U.S. carrier, is that the incident has already escalated when the cameras start recording. What isn’t seen is how it started.

"They're shaming us on the media, without knowing the whole story," said Patrice, who requested that her last name be withheld.

Almost all of the tens of thousands of flights that take off every day are uneventful, says Sara Nelson, international president of the Association of Flight Attendants-CWA. But she said the recent incidents are the result of a lot of unresolved issues.

The airlines also cut flight crews as part of their efforts to save money, Nelson said. “Flight attendants on average are working 25 to 100 percent more than they did just 15 years ago.”

But central to the misunderstandings is the public’s perception that flight attendants are simply servers in the sky, Nelson said.

“Flight attendants are certified safety professionals, and the number one reason they’re there — in fact, the reason they’re required to be there — is for the safety, health and security of the passengers on the plane.

“That’s a federal regulation, and many of the procedures they're charged with are enforcing safety regulations. Since 9/11, we’re the nation’s last line of defense in border security."

The airline industry nosedived after the September 11 terrorist attacks, going through a wave of bankruptcies while imposing brutal cuts to flight attendants’ pensions. Several airlines also merged, and today four major carriers account for 80 percent of domestic seats sold, according to the New York Times.

The smaller flight crews now find themselves trying to please more passengers who are burdened with less room and more irritating fees.

Heather Healy, a clinical social worker who works with the flight attendants’ union employee assistance program, estimated that she would see one in 12 flight attendants before 9/11. Today, she said, she sees one in seven.

“They need to be treated as the first responders as they are,” she said. “Those considerations aren’t given to them. If we truly treated them the way they deserved to be treated, there’d be a lot less incidents….

“They’re performing all these duties required by federal regulations, all while working to be welcoming and accommodating.”

Seth Kaplan, a managing partner with the industry publication Airline Weekly, said he isn’t sure if the number of incidents has increased or there are just more cases of cellphones recording them.

A lot of incidents happen, he said, because you have increasing numbers of people flying, and many of them are new to the experience.

“As a passenger who follows the rules, when I see somebody doing something that’s just going to delay us getting out, I get a little impatient, and the flight attendants are trying to balance all of that.

“I can see the flight attendants are trying to strike the balance between someone who doesn’t fly often with the needs of those who just want to get going."

Nonetheless, Kaplan believes good can come from cellphone cameras being everywhere. “It’s like police officers,” he said. “Some officers complain, but this is the reality now. Some people might be attention seekers, but most people don’t want to be the person on the news.”

One flight attendant said he wishes people knew how much the attendants care about their passengers, and how badly passengers can behave.

“I’ve noticed a shift in passenger attitudes,” said Griffin, who requested that his last name, and the airline he works for, be withheld.

“I’ve had people say the most horrible and degrading things to me,” Griffin said. “I wish I’d recorded it. They’d be embarrassed if they heard themselves.”

Nathan Henderson, a flight attendant, told the New York Post that passengers are more "disrespectful and blame us" for their bad experiences.

He said he has 600 to 900 passengers on workdays, and "people are attacking us simply for making sure they are safe and following regulations."

In the end, though, “airlines will be vaporized if they continue down the path of treating customers disrespectfully,” said Eric Schiffer, CEO of Reputation Management Consultants. “They depend on people flying. Without them, the whole thing falls apart."