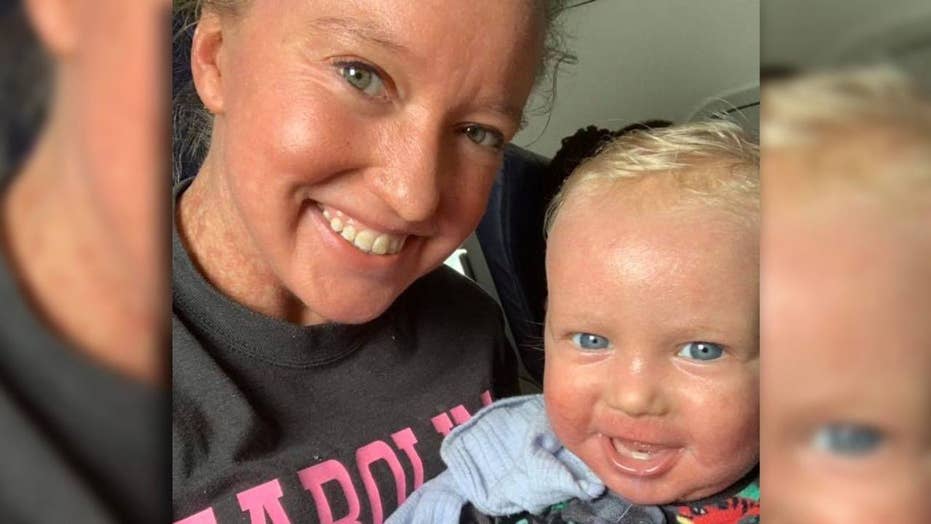 American Airlines apologizes after a woman and her son were removed from a plane because of a rare skin condition.

American Airlines has apologized to a South Carolina woman who was removed from a recent flight over concerns regarding the rare genetic skin disorder that affects both her and her baby son.

On Feb. 28 – which happens to be Rare Disease Day – Jordan Flake and baby Jackson boarded an American Airlines flight from El Paso, Texas, to Dallas, to visit her military husband before his deployment, Fox Carolina reports.

Soon after, Flake claims that an airline staffer approached her (on behalf of the American Airlines crew) about her "rash" and questioned if she had a letter from a doctor allowing her to fly, as detailed in a now-viral Facebook post.

The Columbia mom and son were born with ichthyosis, which, according to the American Academy of Dermatology, is a group of skin diseases that causes extremely dry, thick and scaly skin.

The carrier has since issued both public and private apologies.  (iStock)

“I explained to him that it was called Ichthyosis and it was a genetic skin condition. [The staffer] walked up to the front to talk to the crew. He apparently also Googled it during that time. He came back and said he apologized but we wouldn’t be able to fly and we had to get off the plane,” Flake said of the incident. “He helped me get my bags and Jackson. He talked to the pilot as we were getting off. The pilot seemed ok with it, but the flight attendant rudely said (without even acknowledging me) ‘Well she doesn’t have a letter from a doctor, so...’”

The military wife continued to elaborate that the airline was not able to retrieve her checked bags, though the American Airlines employee “helped me off the plane, got me a hotel and a new flight with a different airline” – though Flake remained shaken that she and her son were “discriminated against… big time!”

“I have never been so humiliated in my life!” she concluded her Facebook post, which has since racked up thousands of comments and shares. “Happy Rare Disease Day! Quit being ignorant and take the time to listen to people! I shouldn’t have to explain myself.”

“Just to clarify, my issue is with the crew. Not the airline employee. He was called by the crew to remove me from the plane,” Flake added. “He was very helpful and mad about the situation. He tried advocating for me.”

In the days since, reps for the carrier returned Fox News’ request for comment on the story with the following statement.

“Our goal at American Airlines is to create a welcoming environment for all of our customers. We sincerely apologize to Ms. Flake and her son for the experience they had Thursday, and our team has begun an investigation into the matter,” a spokesperson said. “Our Customer Relations team has already spoken to her directly and upgraded them on their American flights. We will also be refunding the cost of her trip as well.”

Flakes father, Terry Lee Smith, told Fox Carolina that the embarrassing incident should never have happened in the first place.

“My daughter is a sweet girl, military wife, and great mother.... She was born with this condition and doesn't deserve this treatment,” Smith said.

The American Academy of Dermatology reports that there are over 20 different known types of ichthyosis, the most common being ichthyosis volgaris, which typically begins in childhood. Mild cases of the disease are often chalked up to dry skin, but if twice-daily moisturizer fails to address the problem, patients are encouraged to seek the help of a dermatologist.

Children with the disease typically inherit it through a gene from one or both parents, even if the parent themselves had no symptoms.