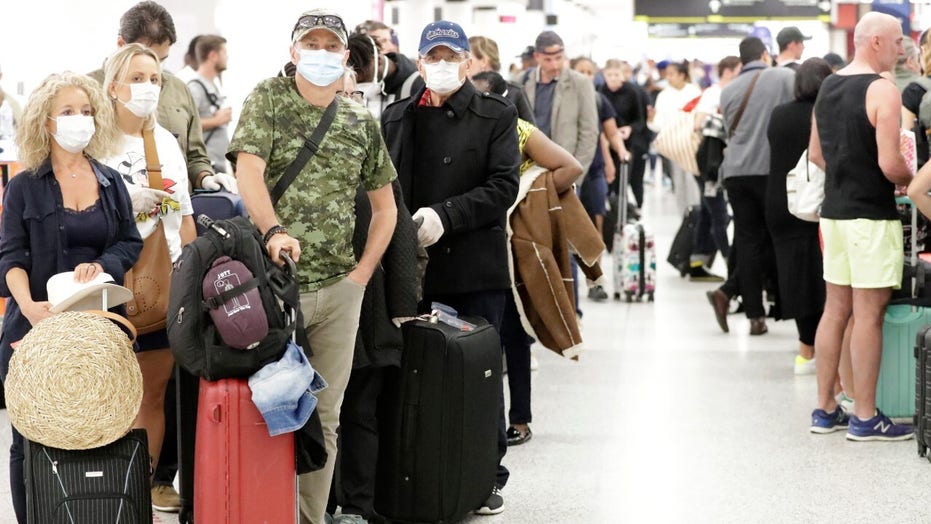 Chaos at US airports as Americans return home amid travel restrictions

Matt Finn reports from Chicago's O'Hare International Airport on the adjustments airports are making to accommodate passengers and screenings at crowded terminals.

Amid a sharp decline in revenue, airline unions and advocates are working in tandem to lobby the government for a financial bailout that will keep the industry afloat and ensure workers receive direct compensation and benefits.

The Department of Treasury has circulated a three-stage stimulus package that would include $50 billion for airlines. One condition of the proposal is that executive pay is limited until the loans are repaid. There's no mention in the current proposal of worker protections.

A potential bailout is one of a number of measures being debated to help American workers and businesses survive the recession wrought by the global coronavirus pandemic.

CORONAVIRUS OUTBREAK: HOW TO AVOID GERMS AT THE AIRPORT

Voluntary unpaid leave and eventually voluntary furlough for employees are expected to continue to impact workers across the industry. In the last week, Delta Air Lines announced up to a 40 percent reduction in staff over the next few months.

American Airlines announced they would cut capacity 20 percent in April and 30 percent in May, while United said they would reduce their capacity by 50 percent through those two months, according to a report  byCowen, an investment analysis firm. Most airlines are asking employees to consider taking voluntary unpaid leave.

A spokesperson for the Association of Flight Attendants (AFA) said the structured voluntary leaves are written into their contracts with many airlines and employees continue to receive healthcare, seniority and flight benefits.

“For the people who can financially take those leaves, they’re doing that,” said Taylor Garland, spokesperson for the AFA. She added that some combination of benefits remains for employees as long as their unpaid leaves are voluntary.

“Once the virus is under control, there can be a return to normal operations. That’s why we’re focusing our efforts with a relief package on the hill.”

While the layoffs are structured and previously negotiated, she said the union is focusing on securing financial relief for the industry and ensuring that any taxpayer-funded bailout is used to provide compensation to impacted employees.

“Once the virus is under control, there can be a return to normal operations,” Garland said. “That’s why we’re focusing our efforts with a relief package on the hill.”

Conditions attached to a bailout package would force non-unionized companies, like Delta Air Lines, to use the taxpayer money to benefit the workers most immediately impacted by the crisis. Previously, representatives for Delta refused to commit to using bailout money to pay their employees who take unpaid leave.

The AFA is coordinating with the Transportation Trades Department, AFL-CIO (TTD) to pressure lawmakers to attach strings to any relief package given to the industry. Larry Willis, president of the 33-union TTD, said the lobbying is an attempt to avoid mistakes made in the bailout given to airlines after the Sept. 11, 2001, terrorist attacks.

“[In 2001] we had carriers take that money and a majority fo them nonetheless to go into bankruptcy,” Willis said. “… The impact was lessened because we didn’t think about frontline workers enough. We’re very committed to ensuring that doesn’t happen here.”

FLYING DURING THE PANDEMIC: SHOULD YOU CANCEL?

Other organizations, like Airlines for America (A4A) and the Airline Passenger Experience Association (APEX) joined in calls for the government to bail out the industry. A4A recently penned a letter requesting more than $50 billion from the government in financial relief.

The requests include nearly $30 billion in grants for airlines and $25 billion in loans and temporary tax relief, according to a document drafted by the organization.

“I don’t think that anyone is interested in writing a blank check here. If we’re serious about economic stimulus then we need to make sure that we're getting economic relief to frontline workers.”

The two-pronged approach to government pressure, with one high-powered group of unions pushing for a dollar amount and another lobbying for worker-friendly conditions, is echoed by some lawmakers on Capitol Hill.

On Tuesday, Sen. Elizabeth Warren, D-Mass., released a number of measures she said should be required in a bailout package. Willis said many of her priorities lined up with the union’s, though they didn’t coordinate with the one-time presidential candidate.

Warren called for companies to maintain their payrolls, implement a $15 hourly minimum wage “as quickly as practicable,” maintain collective bargaining agreements and open at least one board seat to representatives elected by workers. Her measures would also prohibit the use of bailout funds for stock buybacks, paying out dividends or executive bonuses for the duration of the relief and three years after the crisis lifts.

As of this writing, it was unclear what conditions would be attached to an airline bailout package, though it does appear as if some will be. Willis said one goal for any bailout money would be maintained wages and benefits for workers who have taken unpaid leave or have had their jobs furloughed.

“I don’t think that anyone is interested in writing a blank check here,” Willis said. “If we’re serious about economic stimulus then we need to make sure that we're getting economic relief to frontline workers.”