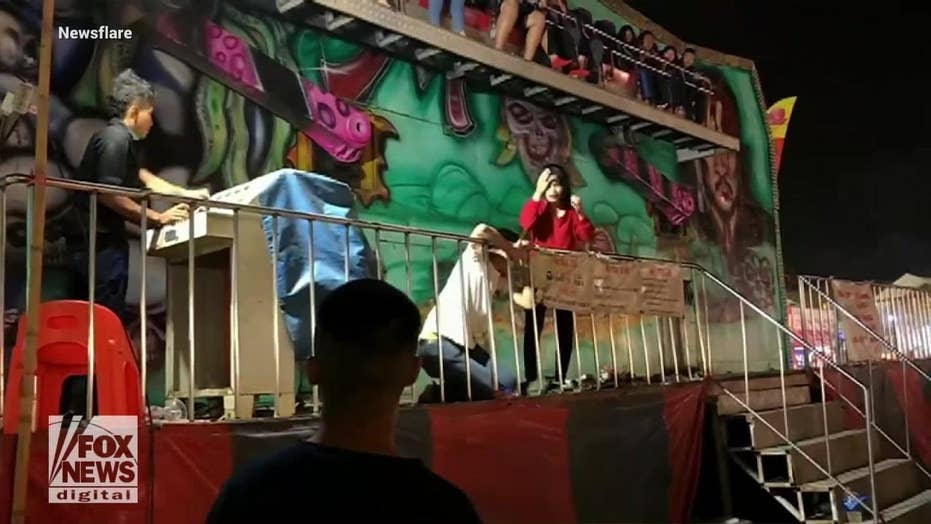 A malfunctioning safety bar on a pirate-themed attraction in Thaliand threw five people from their seats. The ride was closed while police investigated the owner’s license and the safety of the ride.

A carnival ride in Thailand malfunctioned Saturday night, throwing five people from their seats. Two of those injured from the ride were children.

The attraction, a pirate-themed ride in the city of Lopburi, was completing its rotation with 14 passengers when one side of the safety bar became loose, causing five passengers to fall from their seats, The Sun reported.

One of the passengers – a young boy – was thrown over a steel railing and landed on the ground. In footage of the incident (above), he is seen with a head injury while he and another carnival goer try to apply pressure to the bleeding wound.

The other four fell onto the ride platform.

The man operating the ride at the time of the incident claims he was only temporarily filling in for a friend who went on a break. (Newsflare)

One 13-year-old girl suffered a broken leg, according to The Sun, while others were taken to the hospital for treatment. The total number of injured guests was not shared.

A 30-year-old man identified as Ake, who was operating the ride at the time, apologized for this “carelessness” but claimed he “did not know much” about how to operate the ride and was just temporarily filling in.

“I was in charge at the control center because my friend who also ran [the] station went to the toilet and then had a break,” Ake said. “I want to apologize to the people who were hurt and their family, but I did not know much about the machine so I did not check anything before I started it.”

The ride was closed temporarily while police investigated the owner’s license and the safety of the ride. It was unclear if the owner had a valid license to operate the attraction.

The owner could face prosecution and legal action by those injured.