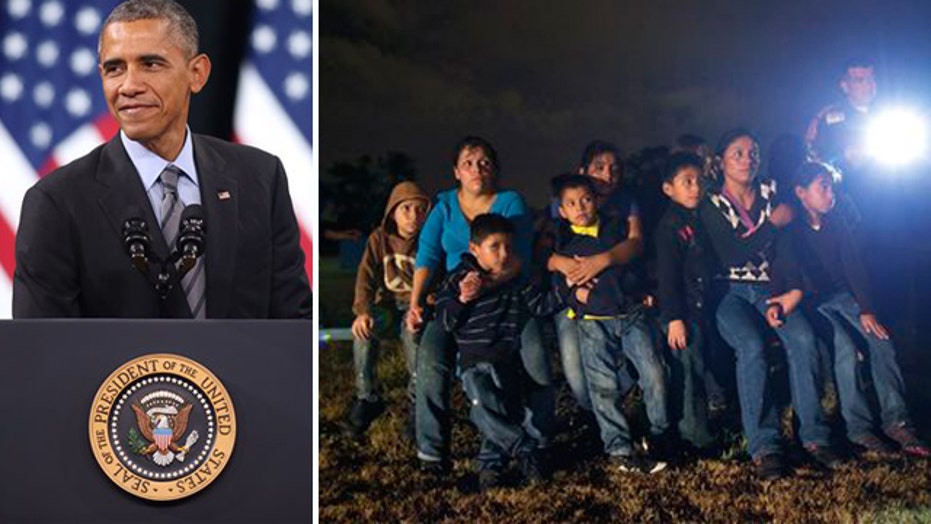 Will executive order encourage more illegals to come to US?

MICHELLE FIELDS: What he's telling everyone is come here break the law, come here illegally, and eventually we'll reward you. This is such a slap in the face to the millions of people like my mother who came here legally the right way to Honduras, didn't come here and break the law. He's just doing this because he wants to stay relevant.

JUAN WILLIAMS: This is a president who acted to try to keep American families together. The reality is you got to be here, under the plan the president announced yesterday, for five years in order to qualify for any of those amnesty and deportations.

JONATHAN HOENIG: I thought the president beautifully made the point that immigrants are good, they're productive, they contribute, and they're part of our lives, thankfully. It's immigrants that are good but it's the entitlement state that's wrong, that's an immoral. I think the political argument here would be that the GOP should accept the president's request but demand back that the all of the entitlement state be rolled back.

WAYNE ROGERS: Once you start with the word illegal you can't ask people to say-okay, this is okay-- Its ok to do that, it's okay to do that. Then you might as well just throw out the law, throw out the constitution, as Eric points out, and just forget about it.

WAYNE ROGERS: It's sad, it's very sad when you think about it. Here's Nancy Pelosi, for example, saying that this guy was an expert on ObamaCare and all of that helped them draft the bill and then she turns around and says I never heard of the guy. Or the president saying he was an advisor. The guy was at the White house over a dozen times, and everybody is denying this guy because he exploded ObamaCare, and the news does not carry it, why?

JONATHAN HOENIG: The mainstream media reflects the culture and they're not interested, they're self-sacrificial. I mean we all knew that the numbers didn't add up. We all knew that essentially there were lies made to get it passed. We all knew that all of these entitlements always blow up in cost, but people support it, the media supports it.

JUAN WILLIAMS: I think the real point here is... I'm surprised that you don't give more credit to ObamaCare critics. At the time the bill was up not one republican voted for it, they trashed it, they said here's the problems, Jonathan just went over some of them. So if you think Gruber is news you must have missed all that happened before.

MICHELLE FIELDS: I think the reason why the media doesn't want to cover it is because by covering it they are admitting that they were wrong. They supported and protected ObamaCare, and Republicans, they said that this was a lie. They said that the American people were being misled, and the media ignored it and now they're being shown that they're wrong.

JUAN WILLIAMS: It's unbelievable to me. I think it's all politics. I think that they don't like Jesse Jackson from the Chicago days and so they have anointed him as their official black leader. I just think it's a poor choice. I think it's insulting.

MICHELLE FIELDS: What bothers me is that if you're a nice conservative group who's just trying to teach people about the constitution, the IRS goes after you. But if you're a race baiter, if you're a crook, oh it's fine if you don't pay taxes, that's perfectly okay. What I don't understand is why does this president continue to elevate him and give him credibility? he's a terrible person.

JONATHAN HOENIG: He can't get an audience out of MSNBC, how come he gets so many audiences with the president? You've got to judge the man by the company he keeps.

WAYNE ROGERS: It's crazy, when you think here is a man, a president, who lies to the public that you can keep your insurance policy, you can keep your doctor, all of those things-he's being advised by a guy who would defame those two people. In the Tawana Brawly case, it's outrageous. And the Heights case. All of these things where he was involved and he's a rabble rouser and he gets paid for this. There are major corporations who will donate money to his cause. I find that outrageous.