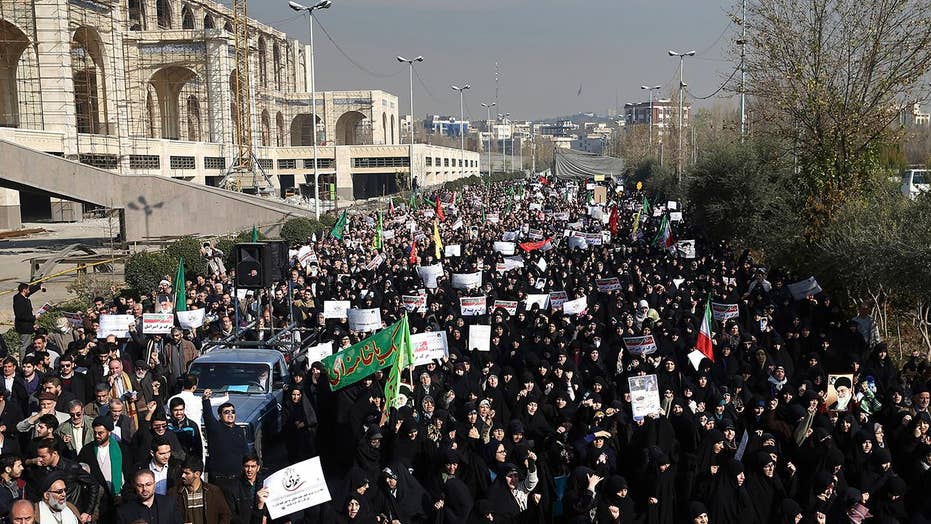 This is a rush transcript from "Special Report with Bret Baier," January 1, 2018. This copy may not be in its final form and may be updated.

HASSAN ROUHANI, IRANIAN PRESIDENT (through translator): The government
will definitely not tolerate those groups who are after the destruction of
public properties or disrupting the public order or sparking riots in our
society. Our people will not tolerate it either.

SEN. LINDSEY GRAHAM, R-SOUTH CAROLINA: If I were President Trump I would
have a nationwide address pretty soon explaining why the Iranian nuclear
deal is a bad deal for the world, what a better deal would look like, and
urge Congress and the European allies to get a better deal with Iran before
it's too late.

You just can't tweet here. You have to lay out a plan.

EMANUEL: And of course, we are looking at the Iran protests that have
erupted in recent days. Let's bring in our panel, Tom Rogan, commentary
writer for the Washington Examiner, Mara Liasson, National Political
Correspondent of National Public Radio, and Mollie Hemingway, senior editor
at The Federalist. Ladies, gentleman, happy New Year. Mollie, your read
on the Iranian protests?

MOLLIE HEMINGWAY, THE FEDERALIST: It has just been quite dramatic to
follow this news over the last couple of days. I think it shows us that
contrary to what people have been saying about Iran being a regime that is
very unified or the country being unified and everybody is emboldened by
their shared hatred of Donald Trump that you actually have at least a large
contingent that is not pleased with Iran, they aren't pleased with their
foreign intervention, they are very upset with the corruption of the regime
and the bad economic effects of that. And so whether regime change is
likely is a huge question. I don't think it's likely but this is still a
dramatic turn of events.

EMANUEL: No surprise president Trump turned to Twitter to talk about the
protests that we are seeing. Let's take a look at that. "Iran is failing
at every level despite the terrible deal made with them by the Obama
administration. The great Iranian people have repressed for many years.
They are hungry for food and for freedom. Along with human rights the
wealth of Iran is being looted. Time for change." And not surprise former
ambassador Susan Rice said the Obama administration had a very different
view. She was tweeting how can Trump help Iran's protestors -- be quiet.
Mara, you've covered both administrations. Your thoughts on what we've
seeing?

MARA LIASSON, NATIONAL PUBLIC RADIO: President Obama was more retrained
than President Trump because his administration believed that if he showed
too much support are in the protestors it would back fire and the regime
would paint them as an American puppet movement. Donald Trump doesn't feel
that way. He is going out much stronger in favor of them. But as Lindsey
Graham says, you have got to have a strategy. Does this mean he should re-
impose sanctions on Iran? Remember he decertified the deal but he didn't,
and Congress hasn't at least re-imposed sanctions. So what does he do
next, that's the big question, how does he support these protests, because
there have been protests in the past during the Obama administration and
they didn't go anywhere.

EMANUEL: Tom, your thoughts on what does he do next?

TOM ROGAN, COLUMNIST, NATIONAL REVIEW: I think the most obvious thing he
can do is to try as much as possible to keep W-Fi networks in operation.
The Iranians are really putting bigger steps in shutting citywide. The
U.S. has the capability to provide some measure of relief there.

At the same time, I think there is an opportunity in the portfolio of the
Iran nuclear to make the case to the Europeans to embarrass them on the
international human rights concerns which they talk a lot about and say,
listen, the nature of this regime, why don't we go back to the drawing
board as they are trying to do at the moment in getting ballistic missile
counterpoints into the deal, more vigorous inspections of military sites.
Why don't we restructure this so that there is more of a moral concern
about where the sanctions relief money goes, that it doesn't go to Lebanese
Hezbollah and missiles into Riyadh, but it might go to a private, European
or American company and to private-public partnership with an Iran company
that isn't linked to the Revolutionary Guard.

That's very in the weeds, but there are functional opportunities here. And
I think Trump quite frankly is right to make that case on Twitter, the
moral case, food and freedom, because there is a lot of arrogance from the
Obama people saying we have to stay quiet. We are so important, Obama's
words. This is a domestic Iranian thing but will flow on the merits of
public --

HEMINGWAY: Remembering too that the Obama administration wasn't just quiet
because they thought it would be helpful to the protestors. In fact they
didn't want to be helpful the protestors. Everything subverted to the
overarching Obama administration goal of getting that Iran nuclear deal,
and that included, as we learned in recent days, not investigating the
Hezbollah operations fully where they delivered million dollars of cocaine
to Europe and the United States. But everything, because the Obama
administration believed that the mullahs were going to be in power for a
long time and they placed their bets with them. And they find this moment
probably very embarrassing because this type of unrest is contrary to the
narrative that they have sold and that has been carried by a lot of media
outlets, too.

EMANUEL: No surprise Israel Prime Minister Benjamin Netanyahu has a strong
opinion about what's going on the streets of Iran. Let's take a listen to
this.

BENJAMIN NETANYAHU, ISRAELI PRIME MINISTER: This regime tries desperately
to sow hate between us. But they won't succeed. And when this regime
finally falls, and one day it will, Iranians and Israelis will be great
friends once again. I wish the Iranian people success in their noble quest
for freedom.

EMANUEL: Mara, obviously for the Israelis the best possible scenario would
be something, dumping the regime in Iran to avoid a military conflict.

LIASSON: Sure. But the question again is what is the best thing that
Israel and the United States can do to make that happen? Donald Trump was
very clear in that tweet he wanted regime change. Time for change. So
what can the U.S. and the Israelis do to make sure that happens? We have
been for regime change for a very long time. There have been protests in
the past, and we have not gotten what we wanted.

ROGAN: I think it would be crazy to talk about going to war with Iran to
try and use a secondary front with the protestors, but that basic
demographic level, Netanyahu is right, whatever Israeli political interests
are in the sense that you have a very young, angry population who has not
seen the dividends of the promise, and the narrative of the Islamic
Republic is one of liberation and shared sacrifice and a kind of nice
socialist utopia, and the reality on the ground is suffering.

And again, I think that is something the United States and the economic
level to reform things so that money flows to people on the ground. The
big problem is ultimately the regime will collapse because the hardliners,
Khamenei, the IOTC, their doctrine is a mission from God. They will not
yield. And it will take a flip in the security forces, and at some point
that will happen.

HEMINGWAY: And calling out evil and unjust regimes is actually an OK
things to do. People mocked President Reagan when he called the Soviet
Union an evil empire. But this is particularly when it aligns with your
nation's interests, and in this case Iran is the number one sponsor of
state terror. It's a nuclear. They're causing all sorts of problems in
the region. So it's OK to call them out.