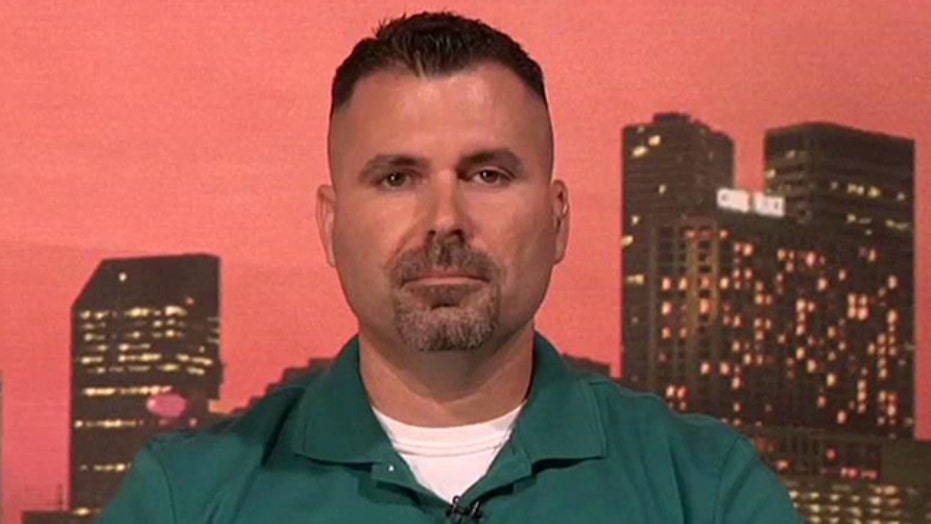 This is a rush transcript from "Hannity," May 22, 2014. This copy may not be in its final form and may be updated.

ERIC BOLLING, GUEST HOST: But first, we begin tonight with new allegations that reveal the VA scandal is not just limited to neglect at a Phoenix hospital. And my next guest is risking his job as a VA detective to expose the culture of coverups at the Miami VA hospital, including allegations of drug dealing, theft and patient abuse.

Here to explain exactly what he is witnessing and why he's speaking out is Detective Thomas Fiore. Detective, thank you for joining us tonight. Thank you for being here. By the way, we need to point out you still work at the VA, is that right?

BOLLING: OK, so why -- let's start with this. What are you seeing? What's going on? You talk about drug dealing. Explain, please.

FIORE: Drug dealing is pretty much a regular occurrence there.

FIORE: It's very easy, actually. The patients come out front. There's a smoking area. They bring their prescription drugs, or any type of other drugs. They all hang out in one large group, and they start asking each other if they're interested in buying the prescriptions that they just filled at the prescription -- at the pharmacy there.

BOLLING: So they're negotiating. Detective, you're watching this. What do you do when this goes on?

FIORE: It's very difficult to actually say that you know for a fact that this is occurring. I've had veterans that have come up to me and said, Hey, listen, you know, somebody asked me if I could buy -- if they could buy their medication from them.

And it's been -- it's been very difficult because I'll approach an individual and say, "Listen, you know, it's been reported that you're dealing drugs. You're selling your prescription. You're trying to buy prescription drugs." And unless I've got some type of evidence to support that, it's not like I can just say, "OK, well, let's file charges against this individual in the U.S. attorney's office." I have to be able to have some solid evidence.

BOLLING: OK, let's say you do have some solid evidence. Have you talked to any supervisors? Have you told the hospital administrators that this is going on? And if you have, what have they said?

FIORE: I actually prepared a written plan, if you will, pertaining to an undercover operation so that we can try to at least identify who our targets are for the drug sales. And I presented that in an e-mail, and I'm still waiting on a response. I submitted it about two years ago.

BOLLING: OK. So as this VA scandal starts to unwind, people -- more and more whistleblowers are coming forward. We would call you one, as well. What else are you seeing? You said you've seen patients stealing drugs from cabinets? Have you seen that?

FIORE: No, I can't say that I've ever seen a patient stealing drugs from cabinets. I have certainly -- a couple years ago, I used to investigate daily controlled substance discrepancies that have occurred within the Miami VA, their pharmacies, and they put a stop to that about two years ago, as well.

BOLLING: Now, Detective, you mentioned that there were some theft of some property, as well, at some of the VA hospitals. What do you know about that?

FIORE: Well, I'm the primary investigator for the Miami VA health care system. It's three very large counties in south Florida. And what I can tell you is any time that there's an account -- we have an accountability process with the medical center. Any time that some of our equipment or some of the equipment within the medical center goes missing, it has to be reported to the police.

I can say that I've done millions of dollars of investigations in a year's period. I mean, I've gone to a patient's home and recovered a piece of property that was somewhere around $45,000 to $50,000. It was just left there after the patient moved. And it was found and determined that this property actually still belonged to the Miami VA.

BOLLING: All right, I have to go. Detective, tell us exactly why you're coming forward right now.

FIORE: Because it's been -- I've tried so many times to reach out to individuals, and all's I have done is basically talked to the wall. I haven't gotten anywhere with it.

BOLLING: All right, we're going to have to leave it there. Detective...

FIORE: After Mr. Cutter (ph) had -- had expired on the fifth floor of the Miami VA, I brought up the fact that this is not being investigated properly. There are so many things that have occurred that are an absolute disgrace. I know that Mr. Cutter's mom, for example, she was -- she was told that he had -- they believed he died choking on a sandwich -- that's absurd -- when we knew, everybody knew that he was utilizing illegal narcotics.

BOLLING: All right, we need to also point out to the audience that Mr. Cutter that you're talking about was a patient who you felt was not only using drugs, illegal drugs, or -- he was also maybe dealing drugs, as well, is that right?

FIORE: Well, I was informed that he was bringing them onto the VA grounds. I can't tell you if it was just for personal use or if it was intended to be sold, but I can tell you that I do know that it was for personal use. I just don't know if he was selling them to other people.

BOLLING: All right, we're going to leave it right there. Detective Thomas Fiore, thank you very much.