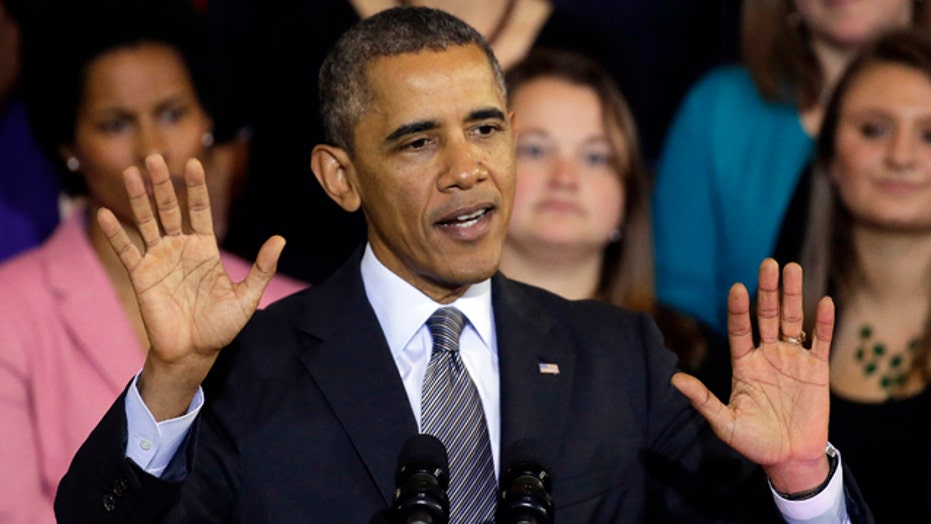 PRESIDENT APOLOGIZES FOR INSURANCE CANCELLATIONS DUE TO OBAMACARE

MICHELLE FIELDS: He knew that this was going to happen since 2010 and he did nothing about it, and now the American people are paying the price for it. If you look at the state of Delaware, it cost taxpayers $4M to set up ObamaCare in Delaware. You know how many people have signed up do far? Four people. That means we're paying $1M per enrollee. No one is signing up for this thing and the reason why is because they cannot afford it. The common wealth fund released a study this week and they found that almost half the people that went to the ObamaCare website and didn't sign up said that the reason they didn't sign up is because they couldn't find a plan that was affordable. No one can pay for this.

WAYNE ROGERS: I'm not sure that he fully understood it. It's a 2,800 page law. We don't know that the president is all that smart. I mean, all due respect, he's a bright guy but you don't read 2,800 pages and come out with what he said. The Congress didn't read it. Nobody read it. Nobody knows what's in the law. He doesn't know what's in the law so how can he make these promises? I'm not sure that he was deliberately lying.

JUAN WILLIAMS: I just marvel at you guys because I think there is nothing that this President can do that will satisfy the critics and people that want to trash ObamaCare. I thought he was exceedingly kind to say if he mislead somebody he was wrong, and he's going to try to make it right; he's got his people looking at it. But the idea that, "Oh, there's nothing wrong with insurance in this country. We don't have catastrophic care that drives people to bankruptcy--"

JONATHAN HOENIG: Deception is not okay, Juan. Think about all that language, "We're all in it together, we're all our brother's keeper". The president would have said anything, done anything to get this law passed. What this law was -- we talked about for years -- is government control over health care. The threats he made to insurance companies, the brazen lies, the promises he made to millions of people about free health care that, as Michelle pointed out, is now a lot more costly. Fundamentally, all of ObamaCare is a lie. It's all based on this old Marxist ideology that a dictatorship is better for everybody. It's not -- except for the ruling class, which is of course exempt from ObamaCare.

JONATHAN HOENIG: In a free market you actually have to earn business through years of competence, successful dealings, and success. This is the fundamental difference between and economic power, like Walmart, which succeeds through trade, and political power, like ObamaCare, which only works because of a government gun. ObamaCare is a gun brought to health care. So all those decisions that a million of us would be making on our own -- what doctor is best, what hospital is best, what website is best -- is now made top-down from government. It starts now with money going to the favorite website provider. You don't think this type of cronyism's going to lead to death panels later on? It will.

MICHELLE FIELDS: They should never have been hired in the first place. When the average American decides to invest or spend their money on a good or service they do research. They often go to sites like Yelp to look at reviews. When the government decides to spend hundreds of millions of taxpayer dollars, they do absolutely no research, because if they did, they would have to have never done business with this company. CGI was hired by the Canadian government to create a medical registry and the Canadian government ended up walking away from that $46M contract and firing CGI because they never created the medical registry, they were 14 months behind deadlines, and they were not doing anything. It never happened. Any rational person would have seen this history and said, "No, we are not working with CGI," but of course the government says, "Yes, show us the contract. Let's sign the dotted line."

WAYNE ROGERS: Eric, you made a good point when you were talking about there must be a good reason -- even a child when he sticks his hand in the fire learns from the first time. Our federal government never learns because they keep committing the same mistake over and over again. It's interesting to note that Michelle Obama's classmate at Princeton is a high-ranking executive in this Canadian firm. Am I saying that she did anything wrong? No, not necessarily, but it's peculiar how those kind of things happen -- how somebody gets those contracts. If you're in a congressional district and it affects your district you get the contract.

JONATHAN HOENIG: NSA, CIA -- and just like the TSA this is security theater. This is the government fighting a real war against Americans -- honest, law-abiding Americans -- and an unreal was against our actual enemies, which even now a decade plus after 9/11 we can't actually name. Are we at war with Americans that we need to be snooping through their private information? No, we're at war with political Islam, Jihadism, militant Islam. Our government can't even get its words out of its mouths, so instead we keep fighting this unreal war against American citizens.

JUAN WILLIAMS: I'm not in favor of it, but I am in favor of being safe. I like the idea that they are going and looking at records-- I don't have any problem with that-- it's when they violate the Constitution, when they go overboard. I think even Jonathan would agree we need to take steps to protect ourselves against those militant Islamists who are trying to kill us.

WAYNE ROGERS: I think the point is this -- it's a question of violating the Constitution. The Constitution was written by men that understood you have to protect people from your own government. Your own government is the one who's snooping and doing all these things. Go back and think every time that this occurs -- Filegate, 1993-94, Hilary Clinton got all those FBI files. "Oh, I didn't do it. Oh, it was a mistake." Every time we do this they abuse it, and abuse it, and abuse it.

MICHELLE FIELDS: This is an invasion of privacy, but I think this is also the epitome of crony capitalism, where you have big government in bed with big business. AT&T wasn't given a subpoena or court order, they just handed this over. They say that freedom isn't free, that freedom is expensive. Well now we know according to AT&T freedom costs $10M.

WAYNE ROGERS: (ADM) "A hot commodity" in this "lukewarm" economy