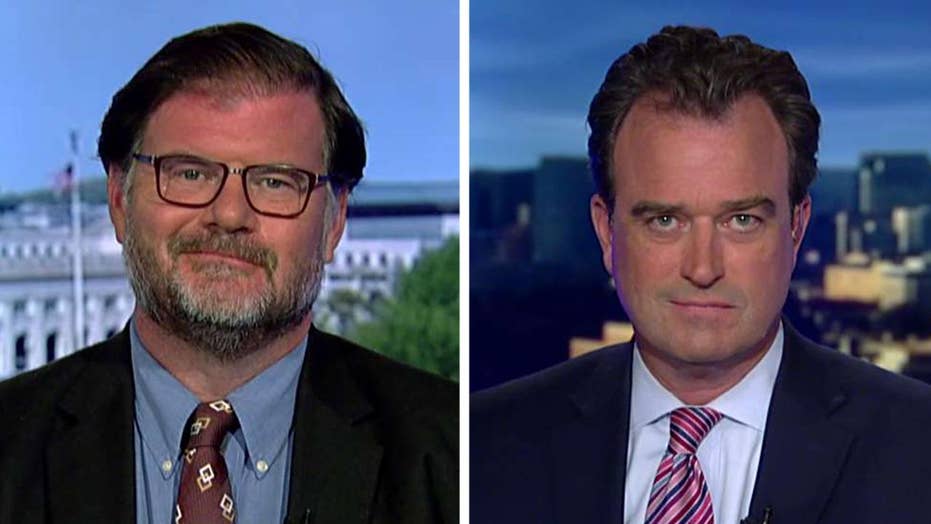 This is a rush transcript from "Special Report," June 14, 2019. This copy may not be in its final form and may be updated.

HASSAN ROUHANI, IRANIAN PRESIDENT, (through translator): The U.S. government has been violating all the international structures and regulations during the previous two years. And using their financial, economic, and military possibilities, they are carrying out an aggressive approach and representing a serious threat to stability in the region.

BRET BAIER, HOST: Tensions are on the rise as this attack on these two tankers, there were two tankers before that, then you had a missile attack into Saudi Arabia, all being tied directly to Iran. Let's bring in our panel from D.C., Charles Hurt, opinion editor for "The Washington Times," Jonathan Swan, national political reporter for "Axios," and Jonah Goldberg, fellow at the American Enterprise Institute.

Jonah, somebody is very happy to see you here behind me.

BAIER: Your thoughts about this as it is escalating and how the administration is handling it?

JONAH GOLDBERG, CONTRIBUTOR: It has the potential to be like that scene in "Hunt for Red October" where Fred Thompson says this could spiral out of control pretty quickly. To me, it's clear. I think Donald Trump is telling the truth when he says Iran did it. The administration believes Iran did it. One of the things that's remarkable to me is how quickly critics of the administration are starting to float conspiracy theories that it wasn't Iran, that this is a Gulf of Tonkin situation or something like that. And so you could see how this could have cascading effects politically here as well.

I think that Iran is basically trying to send the message that if you mess with them too much, they can basically ruin the world's oil supply through the Straits of Hormuz. And that's a delicate thing to figure out how to respond to that.

BAIER: One of those people that you are talking about, Bernie Sanders, put out a statement, "attacks on oil tankers in the Gulf of Oman are unacceptable and must be fully investigated. But this incident must not be used as a pretext for a war with Iran, a war which would be an unmitigated disaster for the United States, Iran, the region, and the world." It goes on to talk about that. Jonathan, it seems like the politics of all of this is coming front and center.

JONATHAN SWAN, NATIONAL POLITICS REPORTER, "AXIOS": Yes. I have had a conversation about six weeks ago with senior national security officials in the Trump administration, and they predicted something like this, not exactly this. But they were very aware, and I reported this at the time, that President Trump's maximum pressure strategy of inflicting as much economic pain at possible on Iran could cause them to do desperate things. As the official said to me, desperate nations do desperate things.

And you just have to look at the last 18 months. The Iranian economy has plummeted. Their currency has plummeted. Inflation is soaring to a point where the Iranian regime has stopped actually releasing their inflation data. So this is a desperate regime. And we could be getting very close to a point where we have conflict. The Trump administration has already said that they want to send more ground troops to the region. They sent a carrier in there. So this is very serious and in many ways could get worse.

BAIER: The question is, Charlie, that from the administration point of view suggests that the sanctions are working, that Iran is like a dog backed into a corner, and that some of this is that, a response to all of that really sinking in.

CHARLES HURT, OPINION EDITOR, "WASHINGTON TIMES": Absolutely. And of course, a dog backed into a corner will bite. The question is, how much damage can they do? And I think that, obviously, Iran is very desperate. They are also the reports that Jennifer Griffin reported tonight that Iran has tried to shoot down U.S. military drones over the last couple of weeks. There's a lot of evidence of this.

The big thing, though, I think that is important to remember is the United States is in a very different position today than we were 10 years ago or 20 years ago in terms of independence from Middle East oil. And the fact that you had two tankers attacked there off of Iran and the markets didn't totally collapse, obviously, the price of oil went up a little bit but not that much. The United States is now a net exporter of oil. It puts us in a much, much stronger position to sort of deal with Iran in a much broader variety of ways. And for somebody like Bernie Sanders to go out there and issue a statement like that as if we are now getting ready to launch a war, it's not helpful, I would say.

BAIER: Here is the president on the situation with North Korea.

GOLDBERG: I think that's an irresponsible and unprovable thing for the president to say. First of all, we have no idea whether we would be in a war with North Korea if he weren't president. We do know that virtually nothing significant or lasting has come out of either of those meetings. They were great photo-ops. The time will tell. I have never thought we were going to negotiate North Korea out of its nuclear program because it is essentially to their identity as a country, and it is essential to the regime's legitimacy. So it's not a comment about the administration. It's a comment about North Korea. And I don't think that the diplomacy so far has been all that significant.

BAIER: Yes. He stops doing the nuclear tests, the president points to that, time and again.

All right, guys, winners and losers. We'll start with Charlie.

HURT: The winner of the week is Mexico's president, Manuel Lopez Obrador, for finally stepping up and doing something serious, of course with Trump's help and leadership, about the humanitarian at the border. Loser of the week is the White House press corps. They don't have Sarah Sanders to kick around anymore. She took what was a nearly impossible job and did a very, very terrific job at it.

SWAN: I'm a loser and I talk about winners and losers. Wow, this is something new.

SWAN: So my winner is George Stephanopoulos for an extraordinary, perhaps unprecedented two days of access to President Trump, including riding in the beast, when it is not clear that the White House got anything out of it besides a headache over the FBI. And the loser is the DNC for a debate selection process that would end up excluding Governor Bullock, a Democrat with an enviable fluency about Middle America.

BAIER: I don't think there's many people happy with that DNC debates, how it all came out. But we'll see when we get down to Miami in a couple of weeks. Jonah, winner and loser.

GOLDBERG: So my loser of the week is Oberlin College which lost a multimillion-dollar lawsuit because what they tried to do was essentially weaponize a social justice mob through the administration and destroy a bakery with false allegations. It was a big win for America, but Oberlin was a big loser.

And my winner is Laila Anderson. She's an 11-year-old girl who was suffering from an extremely rare disease, and she was an enormous St. Louis Blues fan. And she got to go down. They flew her up for the game, and she got to have her moment with the Stanley Cup. And it was a great moment for everybody.

BAIER: That was a cool moment, a viral moment. All right, guys, we'll see you. I'm going to hang out here at Pebble Beach, how about that. Thank you.

When we come back, "Notable Quotables."

UNIDENTIFIED MALE: There is no indication at this time that this was an act of terror.

UNIDENTIFIED MALE: They did their jobs. Eighteen years later, do yours.

MIKE POMPEO, SECRETARY OF STATE: The Islamic Republic of Iran is responsible for the attacks that occur in the Gulf of Oman.

UNIDENTIFIED MALE: This committee is now hearing from the 70's and they want their star witness back.

UNIDENTIFIED MALE: The Democrats are no proper promise a return to the 90's than Republicans can deliver on a promise to return us to the 50's.

UNIDENTIFIED MALE: I will be bold without the bull.

JOE BIDEN, D-PRESIDENTIAL CANDIDATE: Keep the guys away from the sisters. You know what I mean?

SEN. BERNIE SANDERS, I-VT, D-PRESIDENTIAL CANDIDATE: They are unanimous in their hate for me and I welcome their hatred.

UNIDENTIFIED MALE: I don't think I changed anything of what I said because there was nothing to change.

UNIDENTIFIED MALE: If someone else offers you information on an opponent, should they accept it or should they call the FBI?

TRUMP: I think maybe you do both.

UNIDENTIFIED MALE: Unless they are like a rock only dumber, usually spies don't come to you and say I'm a spy.

MITCH MCCONNELL, R-KY, SENATE MAJORITY LEADER: For the first time in my memory, I agree with Nancy Pelosi. I am indeed the grim reaper.

SARAH SANDERS, WHITE HOUSE PRESS SECRETARY: I couldn't be prouder to have had the opportunity to serve my country and particularly to work for this president.

CROWD: Happy birthday to you

BAIER: That's it for the “Special Report.” Fair, balanced and unafraid from Pebble Beach. Here is Martha.