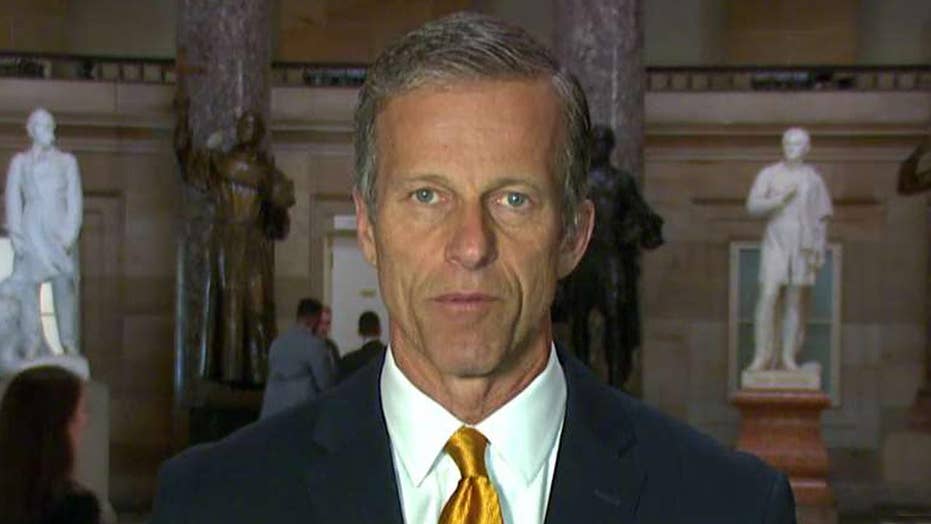 Thune: Confident we could do tax reform before end of year

On 'Your World,' the senator addresses new concerns the D.C. turmoil could delay healthcare reform and tax cuts

NEIL CAVUTO, HOST: All right, markets today in freefall, and largely because they don't really know what to make of this Trump-Comey thing and whether it will be down the road an impeachable offense, all of that, because that is getting crazy.

What they worry about is that it's going to delay something, to a man and woman, Republican, Democrat, a lot of in the investment community wanted to see, tax cuts. And that could be delayed, but not if my next guest has anything to say or do about it.

SEN. JOHN THUNE, R-SOUTH DAKOTA: Nice to be with you. Thanks, Neil.

CAVUTO: Before we get into the details of your plan, are you worried, as the markets clearly were, Senator, that it ain't happening this year, that it's getting pushed back, that it's looking unlikely?

THUNE: Well, I still believe we need to do it this year.

I hope we can find the votes in the Congress to do that. And the president obviously is going to have to be very engaged, Neil. I think, if this pushes into 2018, it gets much harder.

So, I'm still confident moving forward that we can deal with tax reform before the end of the year. And I certainly think, in terms of the economy, it would do a lot to get us out of this 1.5 percent growth pattern that we have been in now for the past eight years.

CAVUTO: Were you surprised -- maybe you agree, for all I know -- by Mitch McConnell's interest in keeping whatever you guys do on taxes revenue- neutral? That bothered a lot of conservatives and probably even the president, who has been talking about priming the pump, going into deficits before you get the revenue from tax cuts?

THUNE: I think a lot of our members have different opinions. And, Senator McConnell, as you said, weighed in with his view that this ought to be revenue-neutral.

I think that's, by and large, the view that has been espoused by the House of Representatives as well, although I think they have members in different places over there.

But we have a lot of Senators who think that we, in order to grow the economy, we need to get the tax rates down and accelerate costs recovery, which is what, as you mentioned, our bill would do, and that eventually that is going to get the kind of growth back in the economy that will generate more government revenues. But that might take a little while.

And, in the meantime, we may have to deal with a little bit of deficit. I think that's -- there are different points of view within our Republican Conference on that.

THUNE: But we will sort through that and hopefully get a bill that is pro- growth bill and creates better-paying jobs.

CAVUTO: Now, the reason why I mentioned it, sir, is that obviously just getting the corporate rate down to 15, even 20 percent from the get-go that might not be revenue-neutral. Then I'm thinking about you want to speed up the depreciation allowances and all the rest.

That too could get complicated, couldn't it?

THUNE: Well, it could. And there are some things that can be done to broaden the base that would act as offsets against some of the reductions in rates that we want to make and some changes in the...

CAVUTO: What about on the business side, Senator, that could offset what you want to do there?

And there are others in the business space, some deductions that are popular with some constituencies, but might be able to be scaled back. I think we're going to be looking at everything on the able to start with.

Obviously, there are some deductions that are very important. Home mortgage interest, for example, is something, charitable giving. But I think, beyond that, there are others out there that we might be able to find some room to help offset some of the costs of what we're going to do.

And then, as you said, we're going to get some additional growth. This is not a static economy. When you change policy, you change behavior out there, and people start investing and taking realizations and paying more taxes. So, growth is a big part of how you get there in terms of revenue.

CAVUTO: Now, you have a very intriguing business plan. A lot of people look at that say maybe that's something we have broader agreement on than we do on the individual rates and tax cuts for the wealthy, et cetera, that-- would you be open, as some of your Democratic colleagues have said, for a corporate tax cut, handle that separately, including what you want to do for small businesses and the like?

THUNE: I think it's really important, Neil, that we deal with business tax rates. We have got to get these rates down. We're not competitive in the global marketplace.

We're driving businesses and jobs overseas. If we want to make America an attractive place to do business, we have got to get the corporate rate down.

What we try to do is, through quicker cost recovery...

THUNE: ... make it easier for small and medium-size businesses to recover their costs. That's the second thing that we think we can do that will really fuel economic growth.

So, those are two changes I think have to be made. What we do beyond that is an open question. But I'm interested in doing anything that will generate greater growth in the economy, because that solves so many problems. That gets higher wages, better-paying jobs and obviously generates more government revenue at the same time.

CAVUTO: Your colleague John McCain had talked about what is bedeviling the president right now, the Comey stuff, that it has the potential scale of Watergate. Do you agree with that?

THUNE: I think that's, at this point, pretty hyperbolic.

We just don't know. I think, right now, what we want to find out are the facts. And James Comey has been invited up here to Capitol Hill by the Senate Intelligence Committee to testify in both an open and a closed setting.

CAVUTO: Real quickly, Joe Lieberman's name has come up for a possible FBI director replacement. What do you think of that?

And, obviously, there was some talk about whether or not there ought to be a politician or a former politician in that job.

THUNE: But Joe Lieberman is a man of great integrity.

And, so, I don't know what the current thinking at the White House is. I know some of the names have been bandied about, but I hope we get somebody good, somebody who is qualified, somebody who has integrity, and somebody who will be independent.

I think that's what the president needs right now. And if he can do that, I think we can get a lot of these -- some of these issues behind us.