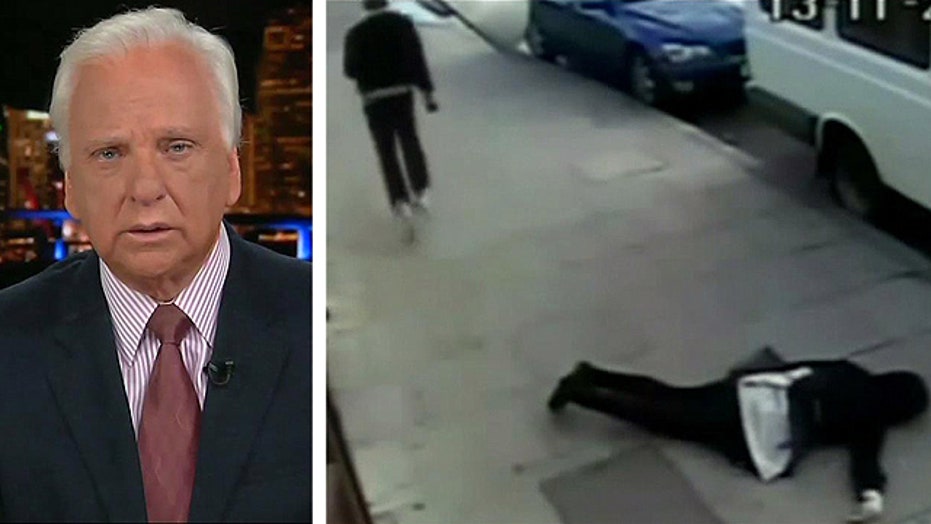 This is a RUSH transcript from "The O'Reilly Factor," November 19, 2013. This copy may not be in its final form and may be updated.

O'REILLY: "Weekdays with Bernie Segment" tonight another example of young black Americans committing senseless crimes. It is called the knockout game. Innocent people being assaulted and the attacks posted on the net.

UNIDENTIFIED FEMALE: Videos of the knockout game are popping up all over the Internet. Innocent victims punched in the face for no reason. Deaths have been recorded in New York and New Jersey. So was CD (ph) Connelly a victim of the knockout game when she was assaulted in the district Friday night?

UNIDENTIFIED FEMALE: I don't know if it's the knockout game. I know that I got hit in the face. It was hard enough that it could have knocked me off my bike. And one of the kids who was in the group kind of cut in front of me and then over parallel going -- crossing in the other way. And as we crossed, he reached out with his left hand and punched me in the face.

UNIDENTIFIED FEMALE: When she told a friend what happened to her, the friend said it sounded like the knockout game. So Connelly Googled it and found out another woman was assaulted in a similar fashion the night before.

UNIDENTIFIED FEMALE: When I called back, they said they got multiple calls on Friday night from other people who reported similar things.

O'REILLY: And those similar things are violent crimes largely committed by young black men. But this story has not received much national attention.

Joining us now from Miami the purveyor of BernardGoldberg.com, Mr. Goldberg. So that report was from the Fox affiliate in Washington D.C., you picked up on it early. What's your overall take on -- let's deal with this crime wave first and then how the media is responding to it.

BERNIE GOLDBERG, FOX NEWS CONTRIBUTOR: Well it's savagery. It's very difficult to watch those tapes. And as far as the media is concerned, if I can get to that, the reason most of the people watching us tonight are probably shocked by watching these videos and don't know anything about them is because as you rightly said they are getting precious little attention. No attention that we could find in the "New York Times" or "The Washington Post" or the network evening newscast.

And I think -- I think there is a reason for this and it's not a journalistic reason. Let's imagine -- just let's imagine that what we're seeing here is white people attacking -- white kids attacking black people. That -- that in cities like St. Louis and Washington and Milwaukee and Hoboken, New Jersey and Syracuse, New York and other cities. White young - - young white kids got together and said let's start this game. You know we'll call it the "Knockout". And -- and they go around and some black guy is coming home from work and out of blue they just hit him in the faces as hard as they can and he goes down. And then -- and then, their idiotic white friends giggle about it like a bunch of hyenas and then they post it on the Internet. That would obviously be a national news story because it's orchestrated racial violence.

GOLDBERG: But this isn't. This isn't.

GOLDBERG: The best -- the best we could figure on the one end. On the attacker end everything we've seen are young black men. Now, there may be -- that one of the women who got knocked down in the video that you showed one of the people that may have been a woman. I can't tell. And it may have been a black woman. That's possible.

But generally speaking, it's black young men attacking white people. As a matter of fact, Bill, in some places, they have another name for it, it's polar bear hunting. Polar bear, because polar bears are white, you know.

And since this is not a journalistic decision because obviously this is a legitimate news story, obviously. This is a liberal, white liberal paternalistic decision. The white liberals in the media, at places that aren't covering this are saying, you know what? We don't want to give any ammo to those white racist conservatives out there because they equate conservatism with racism anyway. So let's just make believe this isn't happening.

How despicable. How disgraceful to make believe something that has spread from one city to another isn't a legitimate news story. And most -- to pick up on what you rightly said, most black kids aren't doing this I hope that's obvious to everybody. Most black kids don't do this. But a disproportionate number are either doing that or are walking into the stores and hauling entire racks of clothing out on to the street.

This is like "Lord of the Flies". This is crazy stuff. And the black establishment the civil rights establishment has been predictably silent on this.

O'REILLY: Yes they're not going to -- they're not going to go in for that. It is a troubling situation. And it all goes back to an alienation of young black men in this country for a number of reasons. But primarily because they're angry they didn't have a family and their father abandoned them and all of that. I mean that's where it goes back to.

O'REILLY: And so they're acting out on the street and they -- they are sold a bill of goods by the civil rights people that white society is the fault because you are unhappy, it's the whites doing it to you. And so they're whacking whites. But, with the Internet and the notoriety, this thing could really get out of control.

I'll give you the last word.

GOLDBERG: That's right. On the fatherless part, you and I have been -- have been two of the few people that are constantly talking about this. I don't know any of these kids obviously, but I'll bet you 95 percent of them didn't grow up with a father in the house, number one.

Number two, on the other part of what you said about blaming white society. What happened after the Trayvon Martin case you had Jackson, you had Sharpton, you had sanctimonious Tavis Smiley all going on television talking about painting a fairy tale picture about how young black males are being hunted down by white people. It was absurd. But they went on doing that and on this they say nothing because -- this is important -- because it speaks to their failure as black leaders. They don't know what to do about this.

O'REILLY: All right, Bernie, thanks very much. We appreciate it.