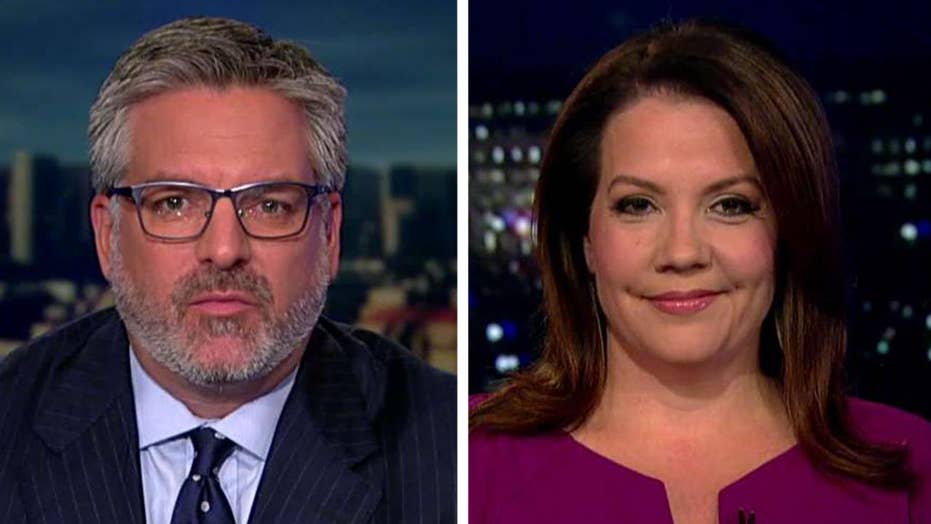 The Democrats and the Trump dossier

This is a rush transcript from "Special Report with Bret Baier," October 26, 2017. This copy may not be in its final form and may be updated.

SEN. RON WYDEN, D-ORE.: The Republican tax plan is a feast for the very wealthy. And the middle class is on the menu.

HOUSE MINORITY LEADER NANCY PELOSI, D-CALIF.: A rip-off, a shakedown, a looting of the middle class.

SPEAKER OF THE HOUSE REP. PAUL RYAN, R-WIS.: The entire purpose of this tax bill is to cut middle-class taxes.

REP. STEVE SCALISE, R-LA.: That's what this budget is about, starting the process to rebuild the middle class, to finally bring those jobs back.

HOUSE WAYS AND MEANS COMMITTEE CHAIRMAN REP. KEVIN BRADY, R-TEXAS: We are working closely with President Trump as he leads this charge. Together we have bold ideas.

BRET BAIER, ANCHOR: It's been tense at yoga lately. The House budget, the budget passed, the senate budget, the House did. The vote today was pretty close, 216 to 212. Twenty Republicans voted no. You can take a look at the House Republicans who voted against the budget, most of those about fiscal concerns about how the math is adding up here. But it does sets the table for tax reform. It was a prerequisite that was needed to speed this up. November 1st the package is expected to be introduced, the text of the bill, just days away now.

November 6th, the House Ways and Means Committee will begin work on legislation in a markup. On November 13th they're hoping for a House vote on tax reform during that week sometime.

With that, let's bring in our panel, from the Washington Bureau: Steve Hayes, editor in chief of The Weekly Standard; A.B. Stoddard, associate editor at Real Clear Politics and host of "No Labels" radio on Sirius XM, and Mollie Hemingway, senior editor at The Federalist.

OK, Steve, some people said they knew it was going happen, but, boy, Paul Ryan voted to make sure it went across the finish line.

STEVE HAYES, THE WEEKLY STANDARD: He did. Close, I think closer than maybe they would've anticipated when they started this process a few weeks ago and began to unveil the framework. The real question I think is what happens between now and November 13th if that is the date that the house votes on this. This is when all of the details are going to be pounded out not only in negotiations on Capitol Hill but also negotiations with the White House and of course with President Trump. Will he tweet about something that Republicans have in this package that he decides later he doesn't like that could potentially derail the process as we've seen it unfold so far.

BAIER: You know, A.B., the president is talking about Republican unity. I will say that there is, and you can check me on this, a sense that a "W" is needed so bad that they are ready to plow forward.

A.B. STODDARD, REAL CLEAR POLITICS: You are right, Bret. I've spoken to so many Republicans in the Senate and House, members and senators this week, and I have not found one who is doubtful. They all say we are going to do it. We are really, really up for this this time. This is going to happen. Then I say how, and they say I have no idea.

And so Steve is right. The hard decisions have not been made. I heard the chairman at an even this week that Real Clear Politics hosted. He could not come up with the pay-fors. Stephen Moore of the Heritage Foundation, a conservative economist who advised President Trump said this is a lousy process. The public has not being able to learn what's in this. They won't have the time to understand it. This is going to be jammed through in fewer than 20 legislative days, and it is a really perilous for the Republicans. But what they are telling me is what they are telling you, it's going to happen. They just have no idea what's going to be in it.

MOLLIE HEMINGWAY, THE FEDERALIST: There has been a lot of complaining about Republicans in Congress and how little they have accomplished, and it's worth just taking a step back to note that Paul Ryan did accomplish a pretty huge legislative feat tonight. He managed to do it. People point out how to narrow thin this was, but he allowed a bunch of Republicans to vote again something that they were worried about, namely that this budget framework allows for a repeal of the state and local tax which is difficult for some Republicans to vote for, so they were able to vote no, but he managed to get it across the finish line. This is something that is worth noting in a year when there have been so many legislative failures, and this is his second big accomplishment.

BAIER: That's right. Speaking of Paul Ryan, Mollie, this is the House speaker on the FBI and dealing with them on this dossier.

BAIER: And obviously the big news that the gag order, Mollie, was lifted last night on this informant. And that starts the process of questioning. But it has been slow going.

HEMINGWAY: It's been interesting. We've been in this for a long time. And there have been two big collusion narratives. One is that Donald Trump colluded with Russia to steal the election. There hasn't been a lot of evidence to support that theory. There is another idea that you've seen Democrats and the Clinton campaign, people in the intelligence agencies and the media working to undermine Donald Trump and his presidency or his campaign through the storytelling about a Russian narrative. And for that we are starting to see a little bit more evidence in that regard.

And so Paul Ryan putting his weight behind those information requests that have been out there for so long to the FBI about why they were playing with this dossier, what they were paying for it, why they used it to secure a wiretap, those are questions that a lot of people are going to want answers for, and it sounds like we're starting to get the ball rolling on that.

BAIER: Just fact-checking here, A.B., a lot of different places say Republicans funded this at first. Just to be clear, a Republican group during the primary funded Fusion GPS for oppo research, but it was not until the Clinton campaign and the DNC funded the same group that they hired Chris Steele, the British national who then contacted the Russians, forming this dossier. So that's just to straighten the facts out there.

STODDARD: Right. And members of the Clinton circle have lied about this throughout and Hillary Clinton is now claiming she didn't know anything about it. John Podesta, the campaign chairman, didn't pay for it. He didn't know what was going on. It all sounds rather suspect. And this is a campaign and a candidate who, she lied about her private server throughout the campaign.

I am with Senator Grassley on this. I think anything having to do with Russia really has to be, whether it is Uranium One or the dossier, has to be investigated. We have a real problem. This country is really being taken advantage of by an aggressive and I think really shrewd power, and we are ignoring it at our peril. So I think that everyone, I don't really care obeyed for it and I don't really care what it turned up or whether or not it's fake or real. I think the fact is all this stuff should be investigated.

It does not at all exempt Donald Trump for what special counsel Robert Mueller is investigating which is not having to do with the dossier. It has to do with the fact that he fired James Comey, the FBI director, who was investigating. He was launching a probe that had to do with Donald Trump and therefore he is looking to obstruction of justice. There are the things like a misleading statement about his son's meeting with the Russians in June of 2016 that the president helped draft. So he's gotten himself into a different spot of trouble having nothing to do with the dossier.

HAYES: What these things have in common is that there have been lies told by virtually everybody at all times on both sides of this. I think the same thing that applied to the Trump campaign and later Trump administration early on when Trump officials one after another had a difficult time telling the truth about what was going on, basic questions, easy questions about contacts with Russians also applies to the Clintons here and the Democrats. It is, shall we say, hard to believe Tom Perez, Debbie Wasserman Schultz, John Podesta had no idea that Democrats had any role funding this. We don't know conclusively that they did.

BAIER: We are talking millions of dollars.

HAYES: It's just hard to believe at this point. Tom Perez claims he just learned about this in the media a few days ago. That's an awfully convenient excuse. I'm not suggesting that he knew for sure. I am saying that there needs to be more investigation.

If I can make a final point on this, the most important thing going forward is going to be transparency. The American people should see this debate unfold in real time with as much information from primary sources as is possible so that the American people can make their own determination about who is telling the truth and what happened.

BAIER: For all the leaks we've seen in the story from the beginning, this theme, there's not a lot of leaks coming out now. We will see this testimony, where it comes from. Panel, thank you very much.