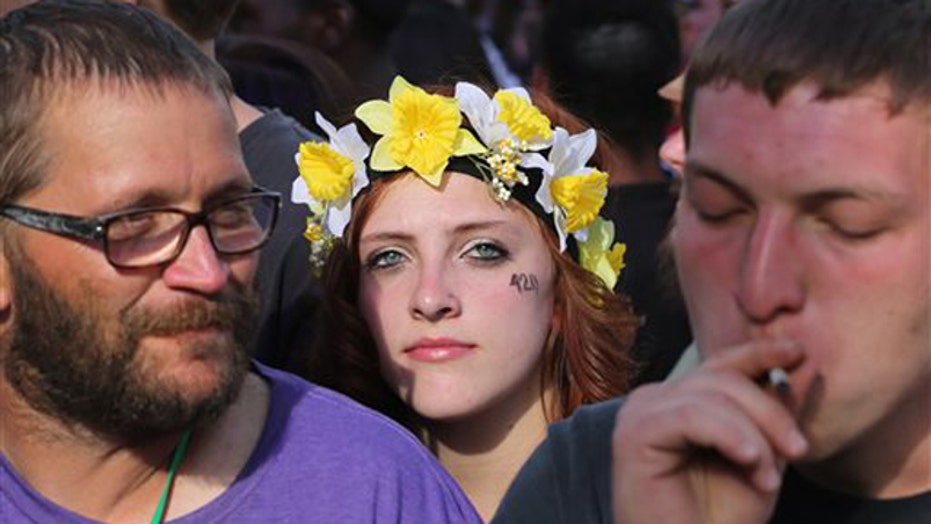 Stoned America: Shattering the myth that pot is safe

Casual marijuana use may cause brain abnormalities

This is a rush transcript from "Hannity," April 22, 2014. This copy may not be in its final form and may be updated.

SEAN HANNITY, HOST: A startling new report was just released that should have everyone thinking twice before they smoke pot. Researchers at Northwestern University discovered that young adults who use marijuana just once or twice a week have brain abnormalities. And when our team of producers were in Denver this weekend -- well, they asked the stoners what they thought about the study. Let's take a look.

UNIDENTIFIED MALE: I'm not a scientist. I don't know, and I didn't read the study. But I think it's possible. I think anything you put in your body that's foreign like that can be a problem. But you know, again, it's America. People are going to do what they want. It's free will, to a certain extent. And I don't think marijuana is any more dangerous than alcohol. If we're going to outlaw marijuana, we should outlaw alcohol, too, which we tried and it didn't work.

UNIDENTIFIED MALE: I would definitely agree with teenagers, definitely. But in a cultural situation in which it's 4/20 friendly and these teenagers have the education, they don't need to need to start smoking marijuana until well after high school.

UNIDENTIFIED MALE: That's pseudoscience and it's false. It was a skewed study to begin with. I looked into that study, and it's not true. Cannabis is known as a bioregenerative. It causes new brain cells to grow, as opposed to what your study suggests.

UNIDENTIFIED MALE: I wouldn't be surprised. There's a lot of developmental changes that happen through adolescence and puberty. As you the brain -- as you age, so does your brain.

HANNITY: All right, here with reaction, the co-host of "The Five," Bob Beckel, the author of "The Younger Brain, Sharper Mind," Dr. Eric Braverman.

Well, that guy said -- does it cause brain cells to grow?

DR. ERIC BRAVERMAN, "YOUNGER BRAIN, SHARPER MIND" AUTHOR: Causes brain cells to die. That's why it's called dope because the animals can't remember where their food is. Plus, it's a gateway drug. Now you add alcohol, marijuana, you end up with more legal narcotic abuse...

BRAVERMAN: ... cocaine across the board.

BRAVERMAN: In fact, you're talking about, unfortunately, a destruction of a fabric of a country. If we get that dependent on this, we're going to end up in a lot of trouble. But these kids don't realize they're compulsive. They have a disease. Just like we crave food, we get hungry, they are desperate for anxiety relief. And we're not addressing it in medicine. They need a nocitol (ph), triptophan (ph), a new nutritional program, DMF (ph) reduction. There is a whole effect of EMF on the brain, the electronic devices that we're using.

HANNITY: And you talk often about your addictions. Do you agree with what he's saying? Do you think you've been negatively impacted mentally by your drug and alcohol abuse?

BECKEL: Well, I used so many different drugs. And by the way, were your producers all not stoned when they did those things because I noticed the camera moved a little bit.

HANNITY: The cameras were shaky there?

BECKEL: But listen, here's -- here's the difference. Now, have my brain cells been altered? Of course they have, I mean, but I used a lot of cocaine and I used -- but I started off with marijuana. And anybody suggests to me that marijuana is not a gateway drug -- if for no other reason that you're around it, you know, and people are using it. And the other thing is that the intensity of marijuana today, the level of THC in it is so much stronger because they breed it in a way that makes it 5, 10, 15 times more powerful than when I used it. It a very dangerous drug.

BRAVERMAN: At the core, marijuana means that people are anxious. It's more deadly than ever, more addictive than ever --

HANNITY: Is it that they're anxious or they just want to have a good time, and then they get kind of wrapped into that culture?

BRAVERMAN: They have a reward deficiency in life, meaning they're not getting satisfaction from work, prayer, family, nutrition, exercise, diet, wellness. We are not catching the 20-year-olds when their brains are supposed to be getting finished off to major contributors to society, what I call myelinization (ph) of the brain, where the complete insulation is done. And they are diseased, whether they know it or not.

BECKEL: Yes, I agree that -- listen, using marijuana gives you relief from life, right? I mean...

BECKEL: Yes, an escape. And then, you know, as you grow older, there are other things around you that can do that. Most importantly, by the way, we don't talk about this, prescription drugs, which I think are terribly dangerous. Xanax, Oxycontin -- go on down the list. The prescription drug business is probably contributing more to addiction in this country than anything else. But to suggest that you do marijuana and then you just stop is, in my experience anyway, is not true.