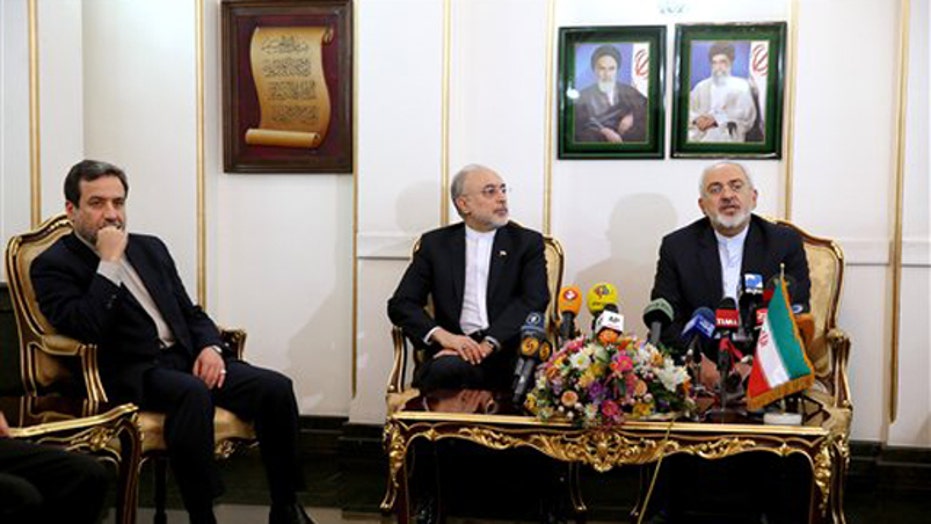 Should sanctions on Iran be stiffened instead of lifted?

What is best path forward for U.S.?

STATE OF SANCTIONS IN FOCUS AMID PROPOSED NUKE DEAL WITH IRAN

Hadley Heath: We certainly don't need to be fiddling around with lifting sanctions on Iran at this moment. We need to see proof from Iran they are willing to stop entirely with their nuclear program. We need to go back to our original negotiations goal. This is not a gift for Iran. This is something we need to think about globally. The global economy is better off with we have geopolitical stability. We will be better served in the long run that United States can ensure Iran is not on the path to nuclear weaponry.

Chuck Rocha: I had an uncle named Lee Ray. If you took lee ray 12 fish, he would complain because you didn't bring him 15. He is mean and angry. That's happening in the world. We need to let this thing see itself through. There are three more months before we see the conclusion of this overwhelmingly across the board, you've seen people say we have a process. We are getting things done. We don't want to send our sons and daughters into harm's way in this. If it falls through, anything's on the table. Let's see this through to the end before we start casting stones.

Gary B. Smith: Once a scorpion, always a scorpion. Iran, North Korea, they can't help themselves. We cannot trust this country. What happened was when we had economic sanctions; you had a country with basically the economy in ruin. Oil revenues consistently dropped off. They can't even clear economic transactions to the global financial system. You have inflation rate of 40%. These are crippling things that came about only because the economic sanctions. That's the only reason they are at the table. I agree with Hadley. Forget about any negotiation. You have two choices. Either bomb them totally, which we are not going to do, obviously. Or you keep the screws on until they get rid of all their nuclear capabilities.

Jonas Max Ferris: How does this sanction policy work? North Korea and Cuba we've been sanctioning them to death. They don't have a pile of oil and gas to live on off to support the regime. Once you got that scenario, the sanctions are never in the long run going to change anything over there. I would suggest getting rid of all the sanctions and replace it with tariffs. Tariffs make money for America unlike sanctions which stop economic anything. They let an industry develop if a country. That industry puts pressure on their government to get the tariffs removed. You can move tariffs around like we do in china. There is no industry in Iran. If you had companies exporting rugs to America, all of a sudden, we don't like what you are doing. We had 100% tariff and the rug companies are calling up the crazy people saying chill out. We want to sell rugs. It would be better for everybody to go more in a free market with tariff penalties in place when necessary.

John Layfield: The sanctions are working. I don't understand who negotiated this deal. This makes Neville Chamberlain look like aces. We are sitting across from somebody with a pair of deuces. They tell us the negotiation terms? We can't touch their nuclear infrastructure? Looks like we won't be able to inspect the military bases, as well. They hid one nuclear facility. They say they are going to turn that into a peacetime plutonium nuclear facility? We trust them with that? Gary b. Is right. They are 40% inflation. Double digit employment. They are priming for a revolt. We made them one of the richest countries in the world. The reason they are celebrating is because this government, we just made sure that they are going to stay in power for a very long time. They have money to sponsor terrorism. They will have a lot of money now to sponsor terrorism.

Gary B. Smith : It's going to kill jobs. We just went through this in Seattle where effective April 1st you had to raise the wages to $15 an hour. Already you had numerous restaurants closing. Just a few of them you had grub in the queen ann neighborhood, little uncle, the boat street cafe. That's just a tip of the iceberg. Wages raise just went into effect. 33% Of a restaurant's expenses are on wages. They only have about 1.5% To 3% profit margin. Do the math. If you raise wages 50% from $10 to $15, guess what happens to your profit margin? It goes to zero. There is no reason to be in business.

Chuck Rocha: Let's stay on the math and do the back woods country math. I'll take the unemployment rate of 10% five years ago. Now unemployment rate is 5%. Profits are skyrocketing author these big corporations and big restaurants. I would throw Walmart in there. There's been social pressure. They started to raise the wages. These are for the m McDonald's-owned stores. When we were an economy we had a collective action against England to say we are not going to take this anymore. If you pump more money into the back pockets of workers? They are going to spend that money and it will help the economy and help all of us. I don't know why we would be against people making more money.

John Layfield: I think the business knows their own business. A lot of these are franchisees, the not McDonald's-owned stores. They can't afford to pay this. If you are talking about $15 minimum wage in Seattle, that doesn't play well in Biloxi, Mississippi. It's hard to have a federal minimum wage. I agree with indexing to a basket of wages and to inflation, but this fallacy if you look back to 1968, minimum wage would be $10 now. They cherry picked their numbers. If you go to 1988 or 1948, that is significantly below where it is right now. These companies need to know their own business well enough to be able to pay the wages. If it makes so much sense to pay them $10 and help the economy, pay them $1,000 if it really helps the economy that much.

Jonas Max Ferris: And consumer behavior. Unemployment rate has gone down because wages haven't gone up a lot. That is probably the main reason unemployment has gone down. If wages were artificially higher, we would have a higher unemployment rate. Companies are feeling the pressure maybe they need to pay more than the market-clearing rate. Maybe consumers don't want a $1 hamburger any more if they think it is being made in a borderline sweat shop environment. That is the natural way for it to occur, not a federal decree. Who is to know what the rate would be. And would it be appropriate in all markets? We had local markets go with higher rates. It's okay. They can handle it in Seattle or whatever. Most workers would be better if companies felt the pressure to not pay the least possible they can to get people to show up for the job. It has to come from consumers who have to pay more for their products.

Hadley Heath: Let's keep in mind the real minimum wage is always zero dollars. That's what you make when you lose your job, when people make when businesses go out of business. They are no longer able to create jobs to offer opportunity to get into the work force. Businesses who have been raising wages are not doing so because of social pressure. They are doing so for business reasons. Low mart did it to lower their quit-and-replace rate. They want to attract and retain the best workers.

John Layfield : I am blown away by this. I grew up in Texas with hard-working illegals. If i could across the border and break the law to give my family a better life, i would do the exact same thing. There is a difference between that and going out and finding people and flying them here. Rounding them up? This is one of the dumbest things I ever heard our government do. That's saying a lot.

Chuck Rocha: First, these people are getting their work permits. Let's clarify the people getting flown here are their children in only three Central American countries where these children are in dire straits for their lives. They are flying families to be reunited together. They are only do that for people going through the process to get a legitimate work document. On the benefit factor, i found out this morning at the social security administration, last year $13 billion was put into our social security program for people undocumented to pay for everybody's social security on this program. Use my tax dollars here and don't give them to Exxon.

Jonas Max Ferris: Can't they use a bus? This government has to waste money on everything. That is like $1,000. Let's forget the morality of the whole thing. We need more people in America. We have a problem Europe has, japan has where the population is not growing fast enough to keep up with the elderly people and cost of Medicare and social security. Is this the best way to bring more kids into America? Probably not. It is something to consider to get our population growing to support our high tax and cost and benefit infrastructure.

Gary B. Smith : I agree, but we can't keep them out. They are climbing the walls to get in here. I think we are doing enough. These kids chuck has the violin out for they are getting free medical care. Brenda, did our kids get all that stuff? No. They didn't get a flight to do it. If you feel so badly, you should give your private money to charity to help.

Hadley Heath: I agree, but we can't keep them out. They are climbing the walls to get in here. I think we are doing enough. These kids chuck has the violin out for they are getting free medical care. Brenda, did our kids get all that stuff? No. They didn't get a flight to do it. If you feel so badly, you should give your private money to charity to help.