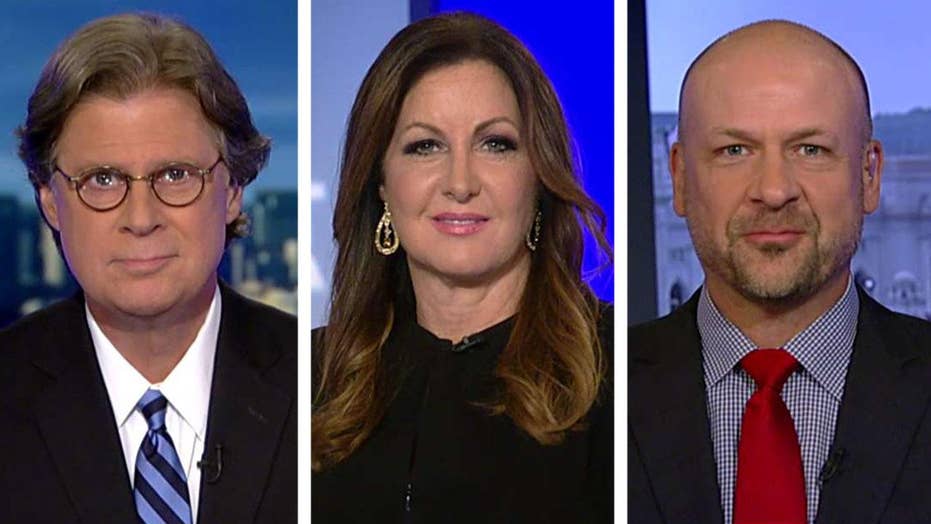 Senatorial support for Sessions appears to be slipping

This is a rush transcript from "Special Report with Bret Baier," August 30, 2018. This copy may not be in its final form and may be updated.

RUDY GIULIANI, PRESIDENT TRUMP'S ATTORNEY: John Dowd yesterday said, I'll use his words rather than mine, that McGahn was a strong witness for the president. The president encouraged him to testify, is happy that he did, is quite secure that there is nothing in the testimony that will hurt the president.

DONALD TRUMP, PRESIDENT OF THE UNITED STATES: Don McGahn is a really good guy. He's been with me for a long time, privately before this.

UNIDENTIFIED MALE: Are you concerned about what he said to the Mueller investigation?

BAIER: White House Counsel Don McGahn leaving, the president tweeting this morning, "I'm very excited about the person who will be taking the place of Don McGahn as the White House Counsel. I liked Don, but he was not responsible for me not firing Bob Mueller or Jeff Sessions. So much fake reporting and fake news."

About Attorney General Jeff Sessions, in an interview late today in the Oval Office with "Bloomberg," the president said this, "President Donald Trump said Attorney General Jeff Sessions job is safe, at least until the midterm elections in November. "I just would love to have him do a great job" Trump said Thursday. Asked if he would keep Sessions beyond November, he declined to comment." Other headlines out of that interview, he said very close to a deal with Canada. May pull the U.S. out of the World Trade Organization. We've heard that before he said it today. Considering a capital gains tax break by issuing a regulation that would index gains to inflation, said he doesn't regret appointing Jerome Powell as Federal Reserve chairman even after he criticized him, and said Allen Weisselberg, the CFO of the Trump Organization, did not betray him when he agreed to agree with prosecutors in their investigation with Michael Cohen. He knows that because he talked to Weisselberg. There you go.

Let's bring in our panel, Byron York, chief political correspondent for the "Washington Examiner," Leslie Marshall, syndicated talk radio host, and Tom Bevan, Real Clear Politics co-founder and president. Byron, out of all of that, what did you take is most important?

BRYON YORK, CHIEF POLITICAL CORRESPONDENT, "WASHINGTON EXAMINER": On Jeff Sessions, maybe it is time for him to resign just to create a little mischief. There's been a real change on the Sessions story because of a change of the Senate that we have seen. Up until now, Sessions' old Republican colleagues in the Senate, especially in the Judiciary Committee, have basically told the president, if you fire the attorney general a new one will have to be confirmed by us and we just don't have time, so don't do it.

But this week we saw Lindsey Graham, member of the Judiciary Committee, saying, look, this is a dysfunctional relationship between the president of the attorney general and it really needs to change. So I think that Trump has a green light to do this after the midterms.

BAIER: To that point, Leslie, "Politico" has a story out today saying that the president personally lobbying these senators to flip on Sessions. "If Sessions recusal was his original sin, President Trump has come to resent him for other reasons, griping to aides and lawmakers that the attorney general doesn't have the ivy league pedigree the president prefers, that he can't stand his southern accent, and that Sessions isn't a capable defender of the president on television in part because he, talks like he has marbles in his mouth the president has told aides." That's Politico reporting that.

LESLIE MARSHALL, RADIO TALK SHOW HOST: I would believe that. It seems like the president is pretty finicky and fickle when it comes to individuals. Sadly, the president forgets, speaking about Lindsey Graham, Lindsey Graham said that Sessions should leave. And then what are we going to have? We're going to have to have somebody who is loyal to the president but is going to protect Mueller. I don't think that the president understands that the loyalty of the attorney general is to the Constitution and not to him. He doesn't grasp this. And whoever were to take the place after November because I think Sessions certainly will be gone, it's clear after what the president said in the interview, the individual I don't think anybody is going to be happy with unless they are leaning towards politics as opposed to the law and the constitution, and that is the role of the attorney general.

BAIER: Understood, that is the role, but if you look back at past attorney generals there has been a lean towards the president's wishes. For example, Eric Holder and others.

MARSHALL: I think that's wrong, I really do. As symbolic as it is, there is a reason why lady justice is blind. There is a reason the scales are supposed to be balanced, because if you truly are doing that job the way that it is meant to be done, the way the framers of our constitution, our government had it, originally and now, you are supposed to be dedicated to the constitution and not the president. And even Jeff Sessions is saying that. That's where his loyalty is supposed to lie.

TOM BEVAN, REAL CLEAR POLITICS CO-FOUNDER: I think Jeff Sessions -- there is a deep rift, as Lindsey Graham said. It has become personal. Trump vents about him constantly on Twitter, doesn't think he is doing what he needs to be doing in terms of the investigation. And it all started with the recusal. He thought he shouldn't have done it and left him exposed. So I think Sessions, his days are numbered. I think Trump is smart not to do it before the election. That would cause a whole basket of issues and bad news coverage and all the rest. But I think his days are numbered certainly after November.

BAIER: Another target is Bruce Ohr who was still the Justice Department, tweet number nine here on Nellie Ohr, his wife, "While Nellie Ohr, Bruce Ohr's wife, is a Russia expert, fluent in Russian. She worked for Fusion GPS where she was paid a lot. Collusion. Bruce was a boss at the Department of Justice and is unbelievably still there." Here is Representative Jim Jordan on this.

REP. JIM JORDAN, R—OHIO, HOUSE OVERSIGHT COMMITTEE: Bruce Ohr, senior official at the Justice Department, his wife was working for the firm hired by the Clintons to put together the dossier. And we know the dossier was the key to all of this. And Bruce Ohr, Peter Strzok told us in the hearing five weeks ago, Martha, Bruce Ohr is the guy who funneled parts of the dossier to the FBI. When they went to the court, the FBI knew three important things and they didn't disclose this to the court. They knew the Ohrs involvement in production of the dossier. They knew that Christopher Steele had this extreme bias against the president, and they knew who paid for the dossier.

BAIER: Byron, where is this going?

YORK: The president is really deep in the weeds with this investigation. One of the things we learned when Bruce Ohr testified behind closed doors, we learned that knowledge of the dossier went farther than we thought in the Justice Department and in the FBI because Bruce Ohr told various people about it. And we also know that Bruce Ohr still has a job. And clearly the president is extremely frustrated by that.

BAIER: Just to short hand it, the allegation here is that Bruce Ohr was the funnel by which the dossier gets to the FBI through his wife at Fusion GPS. That is the shorthand.

MARSHALL: Yes, but this is not the only reason that we have an investigation. If nothing else, one thing the dossier did get correct was that Russia meddled and probably still is and will unfortunately be meddling unless we do something about it in our elections. And that is one of the three prongs, if you will, that Mueller is tasked with investigating as the special counsel.

BAIER: Tom, how about this, what you think Mueller is thinking now? Does he put out some interim thing. Is he holding off past the midterms? Does this get to a conclusion or some indication of a conclusion before November 6th?

BEVAN: I don't think so, but I could be wrong. Obviously nobody knows what Bob Mueller is thinking except Bob Mueller, but we are now within that sort of range, 70 days and counting down to an election. If Mueller is used to tradition and standard, he would not issue a report.

BEVAN: Correct. I think Mueller, given the fact because of all the controversy and conflicts surrounding, he doesn't want to have any further allegations that he is trying to manipulate or play politics with this investigation.

BAIER: We shall see. All signs.