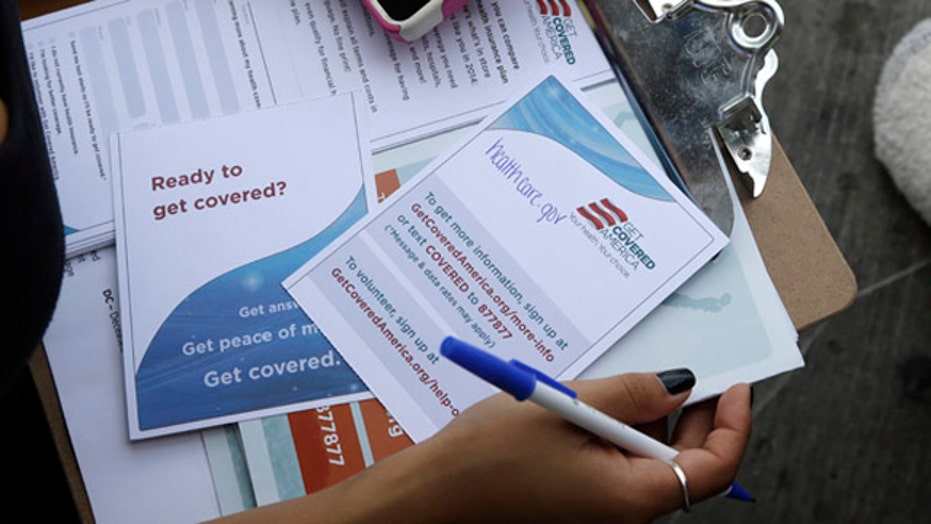 This is a rush transcript from "Your World," March 23, 2015. This copy may not be in its final form and may be updated.

NEIL CAVUTO, HOST: Well, boy, oh, boy, how time flies when you`re not always having fun. Five years ago today, a bill no one read became the law of the land. So I guess they could.

CAVUTO: Do they have the 216 votes they`re going to need to make the largest piece of domestic legislation law? Are we going to have what some people have been calling New Deal Two a reality in the next 24 to 36 hours?

REP. NANCY PELOSI, D-CA, HOUSE MINORITY LEADER: We have to pass the bill so that you can find out what is in it away from the fog of the controversy.

CAVUTO: Monitoring the sausage-making up close and personal.

Nancy Pelosi walking arm and arm with a lot of colleagues up the Capitol steps.

REP. JOHN BOEHNER, R-OH, SPEAKER OF THE HOUSE: Look at how the bill was written. Can you say it was done openly with transparency and accountability, without backroom deals and struck behind closed doors, hidden from the people? Hell, no, you can`t!

There you go, 216 votes, the biggest and the most expensive government initiative since at least the New Deal.

Trillion-dollar health care plan becomes the law of the land, the president signing on to make history. On a grand scale, this is about as big as it gets.

That health care law kind of made Republican Cory Gardner a United States senator, if you think about it, because in Colorado it became the focus of his campaign, and his promise to abolish it now that Senator Cory Gardner wants to make it a mission in life.

Senator, five years later, it is still here. For the next 20 months or so, we`re still going to have the president, for whom it`s named, so you have got an uphill fight on your hands.

SEN. CORY GARDNER, R - CO: We do have an uphill fight.

But in the days and weeks leading to the election, the president made it very clear that it was his policies -- his policies that were on the ballot. And the American people clearly voted a dozen new senators who were voted into office because his policies were indeed on the ballot, and they rejected ObamaCare.

So, I think in Colorado and beyond, you see people continuing to reject this massive bill that five years ago, it was passed with nobody reading it.

CAVUTO: Alright, that was then. This is now. But the administration argues, as I`m sure you`re aware, Senator, that this thing has got traction now, 16 million enrollees now. Now, many quibble with that figure, saying a lot of those who signed up had health care before.

But, how do you counter the notion that if you guys torpedo it or stop it and defund it or whatever, that those millions are going to be without health insurance and you have got to do something for them? What do you say?

GARDNER: Well, they`re mandates under the law. There are penalties enforced by the IRS if you don`t comply with the mandates of the law. So the president trying to take credit for something the federal government is forcing people to do, it`s a little bit ironic that he is trying to cheer for that.

In fact, we have seen the numbers that have enrolled. Actually, that estimate has decreased over the past couple of weeks. In fact, the president has talked about embracing reality. Well, Coloradans are embracing reality. In fact, 190,000 of them just last week had their health insurance canceled once again.

So they`re embracing the reality of seeing another letter in the mail, a letter they were promised they would never receive, by a president who said that if you like your health care plan, you could keep it. Nearly half-a- million people in Colorado had their health insurance canceled. We have -- we were elected to balance the budget. This new class, we were elected on ObamaCare, to repeal and replace it. And that`s what we will continue to work to do.

CAVUTO: All right, now, when you talk about repeal and replacing it, the Supreme Court might just make it easy for you have by nixing a key financing provision, subsidy provision, also how this is essentially paid for.

But then the pressure would once again be back on Republicans as to what they would do for those who lose insurance in that event. Do you have a plan and is it one you think the president would ever accept?

GARDNER: I think the Republicans not only will have a plan, but something the president will accept, because it`s something that we have to do, and that`s important.

People like John Barrasso, a doctor from Wyoming, people like Bill Cassidy, newly-elected senator from Louisiana, a doctor himself, have been working tirelessly on that alternative. People like Ben Sasse, somebody...

CAVUTO: Oh, no, no doubt, Senator.

CAVUTO: I guess what I was saying is, I cannot envision this president would do anything to make you guys look good. He would rather turn it around and say you guys torpedoed a health care law that was helping all these millions.

What is your response going to be?

CAVUTO: But a lot of the message I get from your colleagues, Senator -- not you specifically -- but is that they don`t have the -- I guess the stomach for just repealing this thing outright or, for that matter, the votes, especially veto-proof votes, so that this is what they`re doing instead.

CAVUTO: What do you say?

Well, if you look at the people who were just elected, the people who just got elected in November, not only do they have the stomach, but they heard the backbone to run in an election year against odds that may have been overwhelming at times, the barrage of attack ads coming from the president`s allies, as we stood firm in our opposition to ObamaCare and our desire to replace it with something that will actually work.

So, I believe that Republicans not only here in the House and the Senate will work on that replacement, have it ready to go by the time this ruling is made, but I think the governors across Colorado -- across this country who going to be affected by this decision are going to stand firm, because they understand that there are millions of people who lost their insurance, there are millions of people who have seen their insurance costs increase dramatically as a result of ObamaCare, and we see the debt just at one point $7 trillion in debt added, the CBO projects. We simply can`t sustain it.