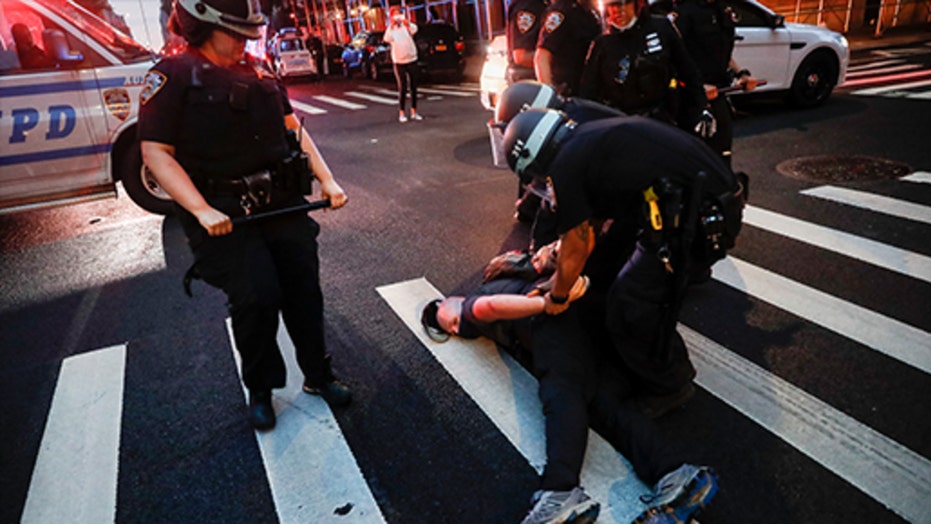 This is a rush transcript from "Justice with Judge Jeanine," June 6, 2020. This copy may not be in its final form and may be updated.

And a reminder, there are protests in Washington, New York and other parts of the country right now. So, we'll periodically be showing you them as we're talking tonight.

Mr. Mayor and Mr. Commissioner, thanks so much for being here. I want to start with this whole issue --

PIRRO: -- of racism and the concept of racism permeating law enforcement.

Is there a way that we can guarantee or at least make a better effort at making sure that -- or making people confident that racism isn't a part of law enforcement? I'll start with you, Mr. Mayor.

RUDY GIULIANI (R), FORMER NEW YORK CITY MAYOR: Sure. Sure there is. I mean, the reality is that police brutality, in many ways is the tip of the iceberg. And if you concentrate just on police brutality, you are going to get nowhere.

If you were to solve all the police brutality, and you had none next year, 99-percent-plus, reasons for the murder of black men would continue. It constitutes less than one percent. The rest of it is violence within the community.

You have to remove all police brutality. But you can't fool yourself into thinking that you're really solving the problem just by doing that. The problem will remain.

And some of the police brutality is a result of the enormous amount of contact that doesn't excuse what happens, which just means, it is going to happen more in that community than somewhere else. So, you have to get to the underlying cause here and you have to make certain that police officers who act in an illegal way are punished, like you just suggested, in a way that deters it.

A first-degree murder charge here would be entirely justifiable, particularly since he was warned about three or four times that he was murdering the man. I don't really understand why the prosecutor has such difficulty with it.

There's all this misconduct.

Cops don't go to work looking for black targets. Cops go to work looking for a crime. And if you look at what CompStat did, what Mayor Giuliani started in 1994 in the NYPD, basically, we started pin-mapping crime throughout the city. So, we would know where it is, where the high priorities are, where the most violence is, where is the highest murder rate? That's where you're sending the cops.

And unfortunately, especially back in the `90s, when you had 2,200 homicides a year, a lot of that crime, 75 to 80 percent of that violent crime and murder was in the communities of color.

But those communities of color had more substantial reductions, 70 percent,

PIRRO: You know, I think we have, if we can throw it up on the screen, I think we have a copy of a map that shows what happens with CompStat that it just shows the crime area and where the particular crimes are occurring, and that will tell you where you need to go irrespective of who lives there or what color they are.

And that is something that Mr. Mayor, you began that was very, very effective. Go ahead, Mr. Mayor.

GIULIANI: Yes. Judge, what that really does and what Bernie is explaining, is the real reason why, at least in New York, I can tell you that racism is not at all involved in those selections. And it's certainly not at all systemic. It may be some individuals here and there.

In other words, the reason the police are drawn to many more encounters with black men is because other blacks call the police, report it to the police or the victims.

GIULIANI: And the victims are drawing the police and then obviously --

PIRRO: Right. To that area.

GIULIANI: -- these people are not making up the race. These are the people that really committed the murder, the rape, the assault.

PIRRO: Right. I want to move on, though. We don't have a lot of time.

GIULIANI: It is an unfortunate fact that --

PIRRO: And I agree, but Mr. Mayor, I want to move on to what's going on in New York City now. There is -- New York City has -- and the police department, NYPD has come under tremendous criticism as not being able to handle the looting and the rioting and the protests that went on during the past week. Did they handle it well?

And I'll start with you, Commissioner, and whose fault is it if they didn't?

KERIK: No, I don't think they handled it well. And I think they were following the direction of the Mayor, Mayor de Blasio, who told them initially he wanted them to take a light touch to dealing with this.

Well, you could take a light touch when you're dealing with peaceful protesters. We do peaceful protests very well in the City of New York by the thousands per year. But in this case, when a peaceful protest turns violent, one rock, one Molotov cocktail, one bottle, one assault. It's no longer peaceful and at that point, it's got to stop. People have to disperse or people have to get locked up.

And in this case, basically, that is not what happened and they went on a rampage and destroyed, I mean, literally destroyed a substantial piece of New York City.

PIRRO: And Mr. Mayor, it seems like the criticism of de Blasio, and you've been very clear, you said that the Governor should remove de Blasio as incompetent, what did you say? Go ahead, Mr. Mayor.

GIULIANI: Absolutely. I think he should remove him because he is a danger to the citizens of the city in his inability to make decisions. Who you elect has consequences. Sometimes they can be life and death consequences.

His holding the police back certainly made the situation much, much worse.

I mean, Bernie would know better than I do, but about a hundred police officers at least had been injured. And how many individuals, I can't tell you.

GIULIANI: And we've had a couple of very close incidents where people could have been killed. That didn't have to happen. We haven't had an incident like this in 27 years, Jeanine, 27 years we've gone --

GIULIANI: -- without a riot of this kind, based on what Bernie is telling you about. My theory is, you arrest the first one who acts out.

PIRRO: And so -- but Mr. -- all right, Commissioner Kerik, how many police officers are in the hospital right now that the mainstream media is not talking about?

You have some in the hospital. But there were over 300 injuries. And the thing that scares me, Judge, I'm hearing close to 600 cops have either put in their papers or they're talking to the department about resigning or retiring, like this is insane.

PIRRO: All right, all right. Mr. Mayor, Commissioner Kerik, I'm sorry, but we've got to go. The time is too short. Thank you so much for being here.

Content and Programming Copyright 2020 Fox News Network, LLC. ALL RIGHTS RESERVED. Copyright 2020 ASC Services II Media, LLC.  All materials herein are protected by United States copyright law and may not be reproduced, distributed, transmitted, displayed, published or broadcast without the prior written permission of ASC Services II Media, LLC. You may not alter or remove any trademark, copyright or other notice from copies of the content.