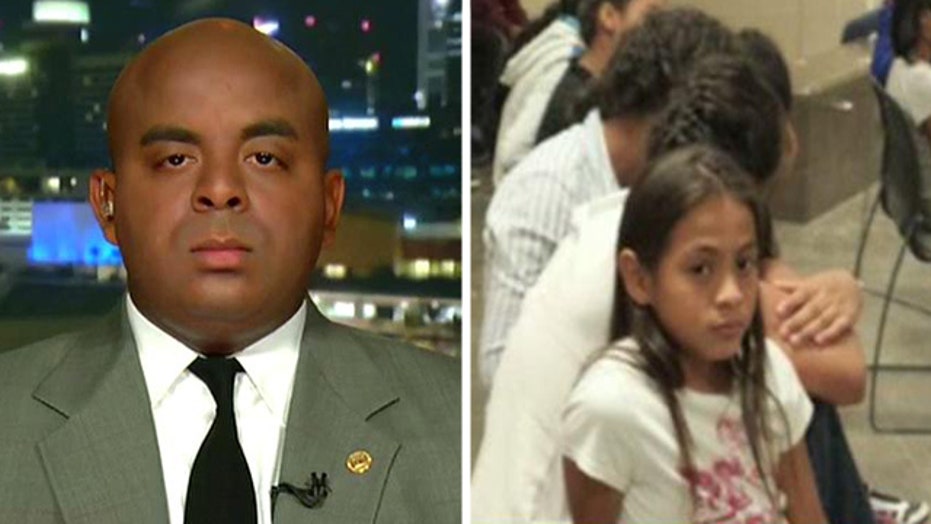 Reverend describes what he saw inside an Arizona border facility

This is a rush transcript from "The Kelly File," June 12, 2014. This copy may not be in its final form and may be updated.

MEGYN KELLY, HOST: Welcome to "The Kelly File" everyone, I'm Megyn Kelly. All week long we've been reporting on thousands of unaccompanied children crossing illegally into the United States in a crisis that critics say was created by the president's own policies.

While the Feds have pushed back against attempts to photograph these overwhelmed check points, The Washington Post has now obtained cell phone video that it says was taken inside a border patrol station in McAllen, Texas. This is our first view of it. You see agents at a desk, look at this, inside a garage holding area, some of them with masks and then a video pans to an area marked by yellow police tape. Look at this. We understand the people inside that area are sick. That flimsy yellow tape is the only thing separating them from expecting mothers and young children. You can hear babies crying in the background. And you also see many people sprawled across the concrete floor. We understand temperatures inside this facility reach 90 degrees. Making things worse, this facility is meant to hold less than 500 people, but on any given day, agents are seeing as many as 1,300 illegal immigrants.

In another area, you see every inch of available space appears to be filled. Rows of girls, little children, reports that these illegal immigrants wait for days, sometimes more than a week with access to portable toilets but no showers. Farther down the hallway, more agents standing by. One with a mask and gloves, you'll see that in one minute, and through the small windows, you can see even more people packed into these tiny little rooms. This, folks, is the United States of America.

Arizona is another state seeing an influx of illegal immigrants and a short time ago, the governor there called on Congress to help. My next guest says he toured one of these Arizona facilities and he says what he saw was pitiful.

Reverend Jarrett Maupin is president of the Phoenix-based Progressive Christian Coalition and is a Democratic congressional candidate in Arizona. Reverend, thank you for being here.

So, you went in and you actually saw this facility in Nogales, is that where it was?

REV. JARRETT MAUPIN, PRESIDENT, PHOENIX-BASED PROGRESSIVE CHRISTIAN COALITION: Yes, it was in Nogales, Arizona, right along our Southern border and thank you, Megyn for having me on tonight.

KELLY: You bet. And tell us what you saw and what you observed in terms of the conditions.

MAUPIN: Well, again, the conditions were pitiful. It's really a sad sight to see. You saw children that had no access to restrooms. They have been un-showered, as I questioned border patrol, standing in their presence, we were told that many of them hadn't showered in 10 days and that's since they got to the United States of America. The FEMA trucks weren't connected when I arrived. There wasn't water running to the showers. I observed them and actually lent a hand when they were putting the -- connecting the toilets to the water truck.

The kids, they are in a storage facility. It's a large warehouse with evaporative cooling. Two hundred and fifty, 300 people in a pin, what can best be described as sort of like a human pin 15-foot chain link with barbed wire. Again, no restrooms in there, just cots and one and a half inch mats to keep them off that concrete floor. I was burning up in there. My whole delegation was sweating and very uncomfortable, so I can only imagine how they felt.

KELLY: This is unbelievable. And you think about, you know, you see those guards with the masks on worried about disease and we heard reports of some of the children having chickenpox, having the MRSA virus, having other issues. I know you said before the show that you observed some children with lice, and you think back to what we saw at the Superdome after Katrina and it just -- you're reminded of that.

MAUPIN: Absolutely. Absolutely. I was on the receiving end here, even in Phoenix, Arizona, when Katrina folks got off of the plane and were taken to our Coliseum. So, it was basic things that my group tried to impress upon Border Patrol while we were there. Had the chaplains been over to see the children? The answer was no. Has your staff, Border Patrol staff hugged the children? Have you told them that they are all right and they will be safe? The answer was no.

That is sad and unfortunate. This is a humanitarian crisis, and it is extremely important that Congress not only fund organizations like the organization for many refugee resettlement but they need to make sure that they are working with the president to make sure that Health and Human Services can get down to these processing centers on the border and make sure that these folks aren't staying any longer than lawfully they're required to, which is 72 hours.

MAUPIN: Well, the children said to several of us that they heard from local media and their parents were under the impression that they could benefit from deferred action if they arrived at the United States within a certain time period. We certainly know that's not true. Many of them talked about cartels. They talked about sexual abuse, dire economic conditions.

But we knew this was coming. I talked to officials from the Guatemalan and Honduran consulates and said that they've known for six months that this influx was coming and we can expect thousands more in the months to come.

KELLY: Wow, Reverend, thank you for being on. I know that they did not want -- they are still not allowing the media in there but they let you in and we appreciate you for shining a light on it.

MAUPIN: They should let the media in.

KELLY: They absolutely should.

MAUPIN: They should let the media in.

KELLY: And we have a right to see what is going on within our country. Reverend, thank you.