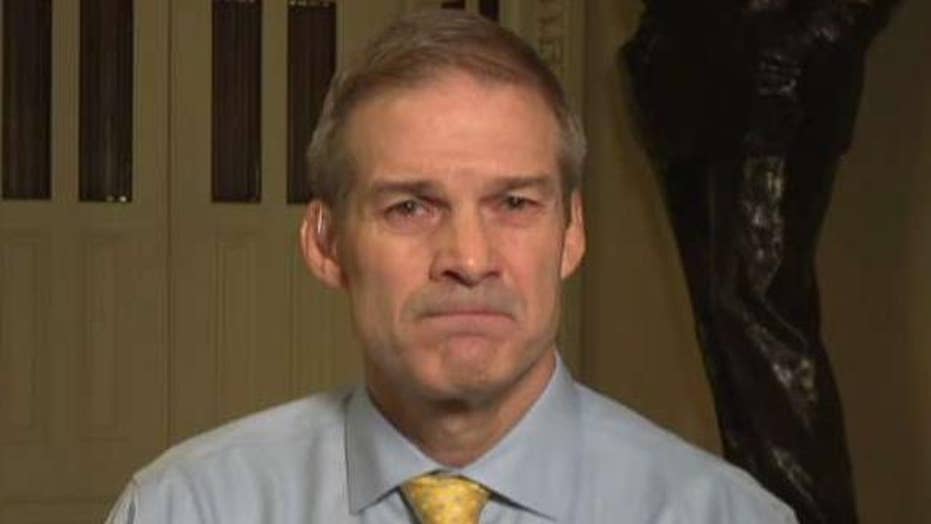 This is a rush transcript from "Special Report with Bret Baier," September 25, 2019. This copy may not be in its final form and may be updated.

BRET BAIER, ANCHOR: Ohio Congressman Jim Jordan is the top Republican on the House Oversight Committee, also serves on the Judiciary Committee. He joins us live from Capitol Hill. Congressman, thanks for being here. I want to start, just get your assessment on this day, this transcript, and where things stand tonight.

REP. JIM JORDAN, R-OHIO: Well, if this transcript is the reason the Democrats are going to move forward with impeachment, it just shows you this is not about facts, this is not about the truth. This is just a pretext for them to do what they've always wanted to do.

So this is just the Democrats out to get the guy we elected president, plain and simple.

BAIER: Here is a compilation of some of those Democrats today, and you rightly point out that it depends on which prism you're looking through how it was perceived of this transcript, and here are the Democrats.

REP. JACKIE SPEIER, D-CALIF.: This is a powder keg.

REP. JOAQUIN CASTRO, D-TEXAS: Coercing a foreign leader into digging up dirt against a political rival for the president's political gain to win reelection.

SEN. RICHARD BLUMENTHAL, D-CONN.: Even if there were absolutely no quid pro quo, the demand itself is a betrayal of the presidency and a misuse of that office. And any use of the presidency for private, personal, political gain is a violation of his oath and ought to be impeachable as an offense.

JORDAN: There's just one problem with all that, Bret. The president of the Ukraine said today that he wasn't pushed at all in that phone call. He said he wants to drain the swamp in the Ukraine just like President Trump is draining the swamp here.

So the Democrats can say all they want -- Bret, here's what we know.

I bet this whistleblower hasn't even seen the transcript until today. But we do know this about the whistleblower -- he had a political bias against the president. The inspector general told us that. So those are the facts we know.

BAIER: Here's what they are saying, congressman, and that is that if it was President Obama, you would have a different tune tonight. If it was President Obama talking to a leader first about military aid, and then saying can you do me a favor to investigate Don Jr. and his business dealings, that you would have a problem with all of that. Is that -- what's the response to that?

JORDAN: The different tune is the Democrats. Joe Biden's son, Bret, Joe Biden's son gets paid $50,000 a month for several years to work for a company in an area of the industry that he has no experience in. And then when there's a corruption investigation into the company he works for, guess what, his dad, who has a pretty important position in our government at the time, Vice President Biden, says either you fire that guy or we're going to hold up aid. They're the ones who have changed their tune, not us. And $50,000 a month, who gets -- I've got people I get the privilege of representing and who don't make that in a year. This guy gets it every month for several years, and you don't think that's strange? So they're the ones who have the different tune, not Republicans.

BAIER: So where do you think this goes? There was one report that Democrats have 213 votes. They need 218. Do you think a formal inquiry turns into impeachment articles?

JORDAN: Look, you have to ask them. All I know is this is a fulfillment of what Chuck Schumer said clear back on January 3rd, 2017. He said to President-elect Trump, he said if you mess with the intelligence community, they have six ways from Sunday of getting back at you. They started doing that clear back I believe in July of 2016. They've continued to do it. I think this is just one more example of those six ways -- I think now maybe it's more than six ways, frankly, that they've went after this president.

Do they have the votes? You have to ask Nancy Pelosi. It appears they might. But I know this, the American people think this is ridiculous, and they think it is completely unwarranted, no justification for it. And I think most Americans are pleased with the job the president has done in leading our country these past three years.

BAIER: What about the job Rudy Giuliani is doing? He doesn't work for the U.S. government, but he is obvious they were representing the president and investigating, what you think of that?

JORDAN: It's up to the president. The commander in chief, if he wants someone to represent him in certain areas and do certain tasks, that's up to him.

All I know is when you look at this transcript, to think that Nancy Pelosi did a press conference for what was in that call, what was in that transcript, and they got all these Democrats now saying they are going to impeach the president based on that, you've got to be kidding. When even Jerry Nadler and Adam Schiff and these Democrats chairs say there was no quid pro quo in that transcript, even they say that, you know there's nothing there. But for these guys, it doesn't matter. They are out to get this guy and I think the American people see through it.

BAIER: Congressman, you're sure in your mind that this is going to backfire on Democrats?

JORDAN: I don't know. We'll leave it up to the people. But I know the folks in Ohio that I get the privilege of representing and all around our great state, they understand the good job President Trump is doing, and they support him. And if the election, I think, were today, President Trump would win in a landslide, certainly in our state, but I think across the country.

BAIER: Congressman Jim Jordan up on Capitol Hill, Congressman, we appreciate the time.

JORDAN: You bet, Thanks Bret.