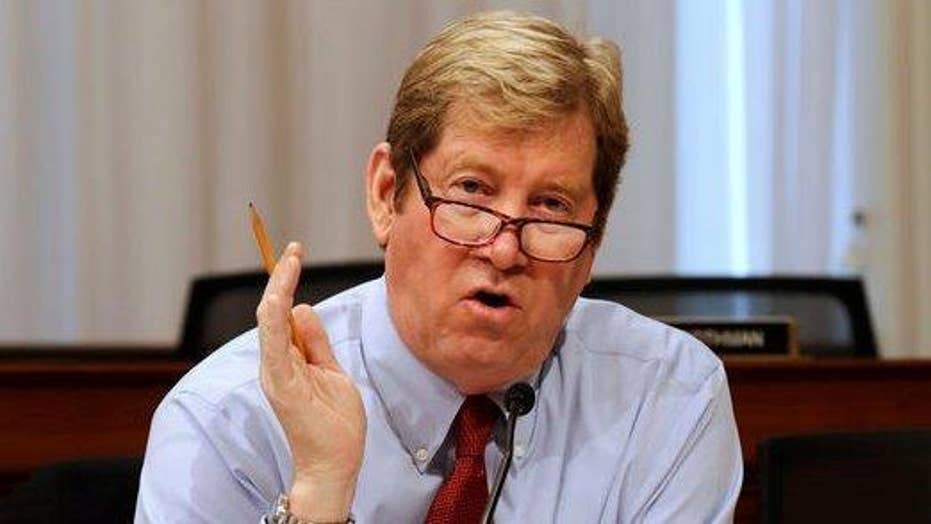 Rep. Jason Lewis hits back after protests reach his doorstep

On 'Your World,' the Minnesota Republican calls for an end to 'irresponsible rhetoric' fueling a 'dangerous' environment

UNIDENTIFIED FEMALE: And we are here to make sure that Congressman Lewis' neighbors know exactly why we're here.

Come on, everybody, cheer!

TRISH REGAN, GUEST HOST: Protesters in Minnesota taking their demands to the family home of Republican Congressman Jason Lewis, upset that he hasn't held a town hall on health care.

The group Take Action Minnesota marched right to his front door. And, today, the group is defending that, that statement in a moment coming up.

But, first, let's go to Congressman Lewis, who is calling it outright dangerous that they were outside his front door.

And he joins me right now by phone.

Congressman, welcome. Sorry you had to go through that. What was your concern at the time? And why do you think it's so dangerous that they're right outside your home?

REGAN: I'm afraid you're breaking up a little bit. But I think you were making the point that your family didn't run for Congress.

So, there's sort of a time and a place for this kind of behavior, this kind of action. And it's not right outside your front door?

And, as I say, the people that get the brunt into this are people that didn't sign up, including my family most of all. And we have seen this deliberate escalation really since January by the usual groups. And it's getting to the point where folks have their private property violated, the well-established security rules, that their office is violated.

They're interfering with constituent service. And you're not going to get more town halls if my other constituents are afraid to come because there's going to be a party crashing them, making a spectacle.

REGAN: Well, Congressman, they say they want to do this in a normal way, in a proper kind of place. They just want to do it in a town hall, but that you wouldn't give them one.

Let me share with you what they said to us.

REGAN: This is a statement from Take Action Minnesota.

They said: "For months, constituents have asked for a town hall. They're worried about dangerous Medicaid cuts that will be debated as soon as Congress returns from recess. Seniors, people living with disabilities and caregivers in Representative Lewis' district have stories to share with him. His constituents would rather have a conversation at a town hall than deliver a letter to his door."

So, why don't you give a town hall?

They're asking for a protest rally. They're asking for me to host the first Democratic rally of 2018. This is led by a group of lifelong Democrats, activists, not constituents who woke up on November 9 and said, oh, gosh, the world is going to hell in a handbasket.

This is a partisan attempt to hijack, quite frankly, a meeting, an office, my home. And at some point, somebody has got to stand up and say, enough.

In fact, the response from the Democratic Party of Minnesota was even worse. They accused the Republicans, including me, of threatening people's lives. Now, do you think that is going to make people more likely to violate private property rights or less? It's that kind of irresponsible rhetoric that is causing this very, very dangerous environment. And it's got to stop.

REGAN: Representative Lewis, did you call the police?

LEWIS: My neighbor called the police.

But -- but my neighbors saw 20, 25 people -- nobody knows the real count -- outside. Their daughters were home alone, got scared, called their dad. He called the police, which, by the way, in the suburb I live in, it's a violation of a city ordinance to what -- not to mention trespassing.

LEWIS: So it's not just free speech. It's starting to escalate in a very, very tenuous environment.

REGAN: In a way that makes it a little bit scary, certainly for your family, for your neighbors, et cetera.

Thank you very much for joining us and sharing your side of the story with us, Representative Lewis.