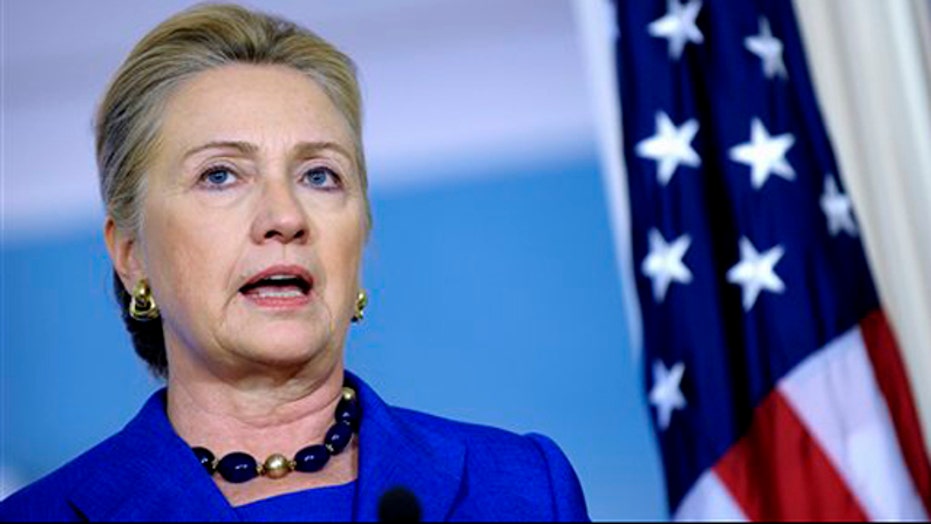 Clinton: Fighting for an 'economy that works for everyone'

HILLARY CLINTON: 'WE'RE FIGHTING FOR AN ECONOMY THAT WORKS FOR EVERYONE'

LISA BOOTHE: She's going to be Barack Obama 2.0. Make no mistake about it; Hillary Clinton is going to be another redistributor in chief. Look at Hillary-care. Hillary-care paved the way for Obamacare. Hillary has also made comments about taxing the rich, and the rich paying their fair share. In the end everybody loses from that "rob from Peter to pay Paul" mentality, and if you look at the Obama administration, middle class families are the ones suffering the most. They're making less than they did when President Obama took office. While jobs have been added to the top and bottom of the wage scale, middle class families have seen their prospects diminish.

WAYNE ROGERS: She's opposed to the free market system. She's a central planning system. She's fundamentally a socialist. This is a woman who lives in a $2 million house and has the chutzpah to lecture us about how the poor are getting poorer and the rich are getting richer.

NOMIKI KONST: They are not the Bushs, and they're not even President Obama who went to private school. The Clintons came from lower working class families. They worked their way up. They understand the system and understand that having fair wages and improving conditions for the middle class improves all of America.

JONATHAN HOENIG: If a neighbor knocked on your door and demanded $1,000 you'd say he's wrong, right? Why is it any different when government does that? That's exactly what this redistribution is.

NEW QUESTIONS RAISED ABOUT COST TO SOCIETY FROM LEGALIZING MARIJUANA

LISA BOOTHE: I'm not privy to the things that he sees on a daily basis, but if you look at the facts with a state like Colorado that legalized about a year ago and the first 11 months in the city of Denver violent crime decreased. And according to the Colorado Department of Transportation, statewide traffic fatalities are also down. I think it's too early to tell and ultimately it's up to the voters in those states, and ultimately it's up to the states to decide.

NOMIKI KONST: The laws have loosened up a little bit. It's really a consequence of economic disparity. These are low-income communities that are struggling, and unfortunately people are drawn to the drug industry to make a couple bucks here and there. This is marijuana; this isn't cocaine or heroin, this is marijuana, pretty much harmless, in my opinion, harmless drug. It's not a consequence of using the drug, it's a consequence of an unregulated-- and you want to talk about free market, this is a perfect example where we could use the free market to regulate these drugs so it's getting off the streets and into storefronts.

JONATHAN HOENIG: This whole notion that weed is "legalized"-- it is Orwellian double speak to the highest regard, just like in New York State where it's only legal for medical purposes. There are only 20 medical dispensaries for 20 million people; that creates the illicit drug trade that we saw during prohibition that increases the crime. It's not even legal for recreational use. So to say it's legal isn't just misleading it's a lie.

WAYNE ROGERS: It's a mystery to me. I think Jonathan is absolutely right. We've only got four states in the District of Columbia that have decided it's legal. You don't have enough time to know yet. The comparison, I think, to prohibition is absolutely accurate. Everybody says "yeah, this is going to be great, it's going to stop people from drinking". Yeah, and then four years later they drove it underground; it became a major crime problem. That's exactly what could happen here. They do not know yet. No one really knows because they don't have enough information.

NOMIKI KONST: I think we have an issue in America where there's disassociation from reality. We think that if we type it online it's not real life and it doesn't affect others. This is where the cockroaches of society are coming in and saying whatever they want, not understanding that it's affecting people. What they're saying is sexist, hateful, and disturbing. I'm really happy that Twitter is finally stepping up and saying that they're going to stare to regulate these haters. It's just too little too late. You can't give these people megaphones.

JONATHAN HOENIG: We all get offensive tweets. Actually I'm getting a bunch right now. The point is, in a free society there are consequences for your speech. All these individuals participated in it, and they've been expelled, fired, or publicly shamed. This is essentially the online version of that Westboro Baptist Church. It is disgusting, I agree with Nomiki. But if you put yourself out there, you're putting yourself out these for not only the ridicule, but also the consequences.

LISA BOOTHE: The freedom to speak freely is something that makes America so great, but this crosses the line into threatening bodily harm, and especially if these individuals actually have the intention of carrying out those threats. Unfortunately, at least with some of these guys, I believe there was one college student that was actually suspended from his university, and another ticket seller for the New York Times was reportedly fired for his actions. Hopefully more people take action against employers or students for these kinds of comments.

WAYNE ROGERS: It goes back to what Jonathan said first. It's the free market taking care of this. This is not a government regulation. We have laws about libel, and if you violate the laws about libel you're subject to a lawsuit. This was not about that. So the free market took care of it because Curt Schilling raised this question with other people and the press. In this case-rarely does the press get excited about the right things, but in this case they did, and they published stuff about these people and he got to people who could bring some economic reality to this and force these people to break down. It's a wonderful thing.